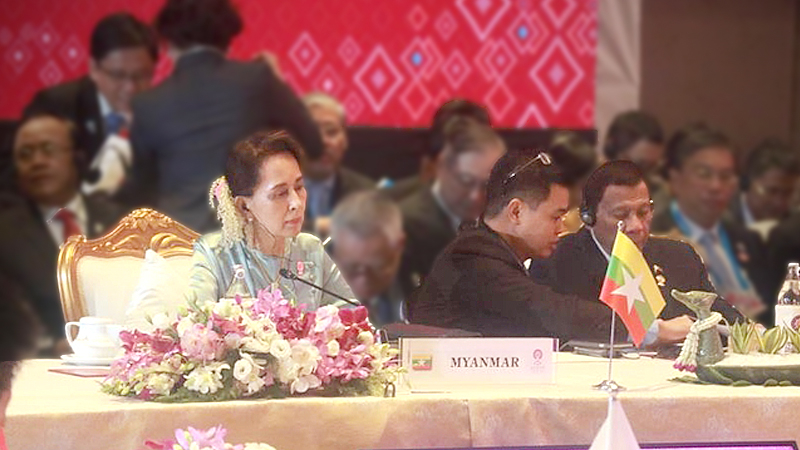 State Counsellor Daw Aung San Suu Kyi responded to the remarks made by UN Secretary General Antonio Guterres regarding the Rakhine issue. She underscored that Myanmar will not shirk its responsibility to take care of the rights and security of all those whom it must protect.

In the opening session of the 10th ASEAN-UN Summit in Bangkok on 3 November 2019, the UN Secretary General expressed concern over the situation in Rakhine State and the plight of the refugees in Cox’s Bazaar. He also stressed that it was Myanmar’s responsibility to ensure a conducive environment for safe, voluntary and dignified return of refugees.

In response to the remarks of the Secretary General, the State Counsellor underscored that the issue of Rakhine is a most complex one and that the UN and its agencies which have been present in the region for ten times longer than the present Government has been in office, must have some idea of the extent of the complexities. She stressed that the Government will not shirk its responsibility to take care of the security and rights of all those who it must protect. She added that the Government of Myanmar was fully committed to take back the verified returnees based on the bilateral agreement signed with Bangladesh and the trilateral agreement signed with UNHCR and UNDP. She expressed appreciation to ASEAN, the ASEAN Secretariat and the AHA Centre for their constructive contribution to our efforts in creating the most suitable environment to which the displaced people can return in peace and security and voluntarily. She reaffirmed Myanmar’s intension to continue its work with the help of our friends who approach the problems in Rakhine in a practical and balanced way.

Forty-six Bengalis from the IDP camps in Bangladesh reentered Myanmar of their own plan on October 31. Ngakhuya reacceptance camp in Taungpyo Letwel accepted the Bengalis. Myanmar and Bangladesh agreed on the repatriation process and it was organized by both governments, but no displaced persons reentered Myanmar so far.

Myanmar government pointed out that Bengalis from the IDP camps in Bangladesh dared not return to Myanmar because of the threats of the ARSA. But the number of displaced persons who returned Myanmar of their own plan reached more than 300.