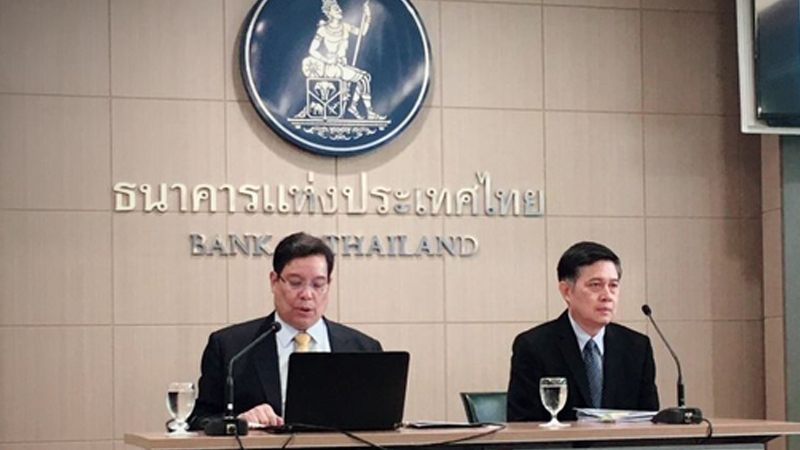 Titanun Mallikamas,left, secretary of the Monetary Policy Committee (MPC) and Mathee Supapongse, deputy governor of the Bank of Thailand, brief the press today (November 6) on the MPC's decision to cut policy rate by 0.25 percentage point from 1.50 per cent to 1.25 per cent, effective immediately.

The Bank of Thailand’s monetary policy committee voted on Wednesday (November 6) to cut its key policy rate by 25 basis points to 1.25 per cent.

It is the second rate cut this year after a 1.5-per-cent trim in August, which was the first cut in four years.

The International Monetary Fund had earlier said Thailand had the policy in place to cut its interest rate and the fiscal power to spend more on infrastructure even amid the global economic slowdown being worsened by the US-China trade war.

Committee secretary Titanun Mallikamas said members voted 5-2 to cut the policy rate by 0.25, from 1.5 to 1.25 per cent, effective immediately. Those opposed wanted the rate maintained at 1.5.

In their deliberations, the members expressed the belief that the Thai economy would expand at a lower rate than expected and below its potential due to a decline in exports, which have affected employment and domestic demand.

Headline inflation was projected to be below the lower boundary of the inflation target. Overall financial conditions remained accommodative. Financial stability risks had already been addressed to some extent, although there remained pockets of risks that warranted monitoring.

Most members felt a more accommodative monetary policy stance would contribute to economic growth and support the rise of headline inflation toward the target.

The two who disagreed felt the current rate was already accommodative and another cut might not lend additional support to economic growth, whereas there would be added potential for stability risk. They also saw a need to preserve limited policy space for coping with possible increasing risks in the future.

Merchandise exports contracted more than expected and were projected to recover more slowly due to the slowdown of global trade volume affected by international trade tensions.

Tourism is growing at a lower-than-expected rate.

Private consumption is expected to slow despite fiscal stimulus measures, due to moderated household income and a sharp decline in employment, particularly in export-related manufacturing, as well as elevated household debt.

Private investment is also likely to expand at a slower rate than calculated. However, the relocation of foreign production bases to Thailand and public-private partnerships on infrastructure should support investment in the period ahead, Titanun said.

The committee’s consensus was that the Thai economy would face higher risks in coming months, especially external risks from trade tensions, the economic outlook of China and advanced economies that could affect domestic demand, as well as geopolitical risks.

Titanun said the committee would monitor the impact of fiscal stimulus measures and public expenditure, together with the progress of major infrastructure investment and its knock-on effects on private investment.

The annual averages of headline inflation in 2019 and 2020 were projected to be below the lower boundary of the target due to lower-than-expected energy prices in tandem with global economic slowdown.

The committee felt structural changes contributed to more persistent inflation than in the past. Such changes included the expansion of e-commerce, rising price competition and technological developments reducing production costs.

These allowed financing by the private sector to continue expanding. However, loans extended to both businesses and consumers are likely to exhibit slower growth.

With regard to exchange rates, members expressed concern over the baht’s appreciation against trading partners’ currencies, which might affect the economy to a larger degree amid heightened uncertainties overseas.

The committee supports the relaxation of foreign-exchange regulations to encourage capital outflows and promote more balanced capital flows, which would alleviate pressure on the baht and help the private sector better manage exchange-rate risks.