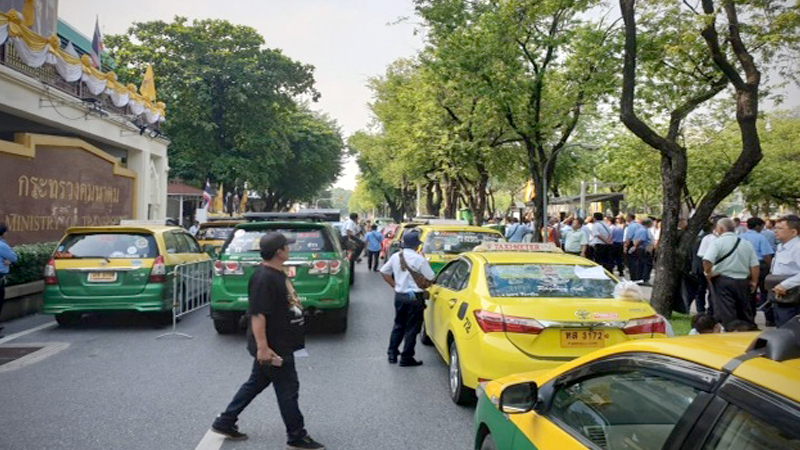 A hundred members of the Thai Public Taxi Association and Task Force for Organising Service Vehicles at Suvarnabhumi Airport blocked the entrance to the Transport Ministry on Thursday (November 7) while demanding a response to their request for hikes in fares and luggage-handling fees.

Minister Saksayam Chidchob had promised to consider the request in late August.

The proposal is that the meter fare would remain at Bt35 for the first kilometre but would increase incrementally by Bt0.50 per km for every consecutive 10km, so that the charge would be Bt7.50 per km for Km21-40 and ultimately Bt10.50 per km for rides beyond 80km.

The organisations also want airport surcharge rates increased from Bt50 to Bt70 for normal-size taxis and from Bt70 to Bt90 for larger taxis, as well as applying a Bt20 fee for every piece of luggage 26 inches in length or larger, though the first two pieces would be handled for free.

The taxi drivers’ representative said the minister had promised to consider their request “many times” but they’d still had no response.

One rep, who declined to give his name, said Saksayam recently promised them the Department of Land Transport would pursue more information, and meanwhile the government aimed to cooperate with the drivers.

The department has acknowledged that the taxi drivers are struggling with fuel costs under the current fare schedule and those who drive large taxis to and from the airport suffer worst.