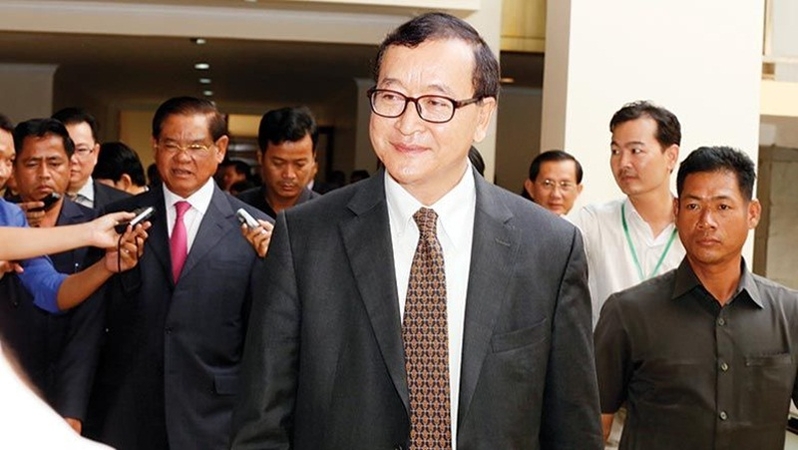 Cambodia has welcomed Prime Minister Prayut Chan-o-cha’s assurance that exiled Cambodian opposition leader Sam Rainsy would not be allowed to return to Cambodia through Thailand.

Cambodia’s Ministry of Foreign Affairs and International Cooperation spokesperson Koy Kuong said Cambodian and Thai cooperation meant the countries would not allow each other’s territory to be used by any group to act against the interests of the other or any other nation.

“According to our commitment to Asean, we will not interfere in each other’s internal affairs, and we will not allow any anti-government person to use Thailand for activism,” Prayut told a press conference on Wednesday.

The Thai prime minister was referring to Thailand’s obligations under Asean to Cambodia, a fellow member of the 10-member regional bloc.

“This principle means that Sam Rainsy’s request to Thailand’s prime minister for passage to Cambodia will not be possible,” Kuong said.

Rainsy, the “acting president” of the Cambodia National Rescue Party (CNRP), which was dissolved by the Supreme Court, had reportedly sent a letter to the Thai prime minister last Thursday requesting to be allowed to pass through Thailand to enter Cambodia through the Poipet border checkpoint.

“You may be aware that I plan to return to Cambodia on November 9, our national Independence Day. I have no choice but to do so in the face of the treatment that many of my party’s supporters have endured.

“My request for safe passage through Thailand is based on my responsibility to my supporters, who have suffered greatly, and to all Cambodians who deserve a democratic debate over the future of their society,” he said in his letter to Prayut.

Rainsy said he would land at Suvarnabhumi Airport on Friday on Thai Airways Flight TG931. He would then continue to Aranyaprathet on the border and into Cambodia through Poipet.

“As the public have heard, there was a woman who tried to enter Cambodia through Thailand, but she was turned away,” Kuong said, referring to CNRP vice-president Mu Sochua being turned away from Thailand on October 20.

“Also, along the border with Thailand there are pictures of an illegal group displayed. Thailand has said it will cooperate to arrest them.

“We really appreciate the understanding from the Thai government. The Royal Thai Government understands the real situation in Cambodia.

“They know that [Rainsy] won’t bring peace but comes to topple the [Cambodian] government,” Sopheak said, adding that he hoped Thailand would cooperate in preventing all coup attempts.

Justice ministry spokesperson Chin Malin also welcomed Thailand’s stance. He said the decision represented the independence of a country based on the cooperation between Thailand and other Asean member states.

It also reflected the Asean Charter that mandates non-interference into the internal affairs of other nations and forbids the use of the territory of other member states for anti-government activity.

Rainsy, who did not respond to an enquiry from the Post via email on Wednesday, posted a picture of his plane ticket on his Facebook page.

Sok Touch, the president of the Royal Academy of Cambodia, said Prayut respected Cambodia because the Kingdom did not allow any party from Thailand to be based in the Kingdom.

He said a request from the Cambodian government meant much more than one from Rainsy.

“I believe that Asean members will not interfere with another member’s internal affairs. If there was interference, it would go against the Asean Charter,” Touch said.

Political analyst Lao Mong Hay said: “It is in the best interests of Thailand. Sam Rainsy’s return via its territory could affect its interests in Cambodia and its economy, which employs some two million Cambodian workers.”