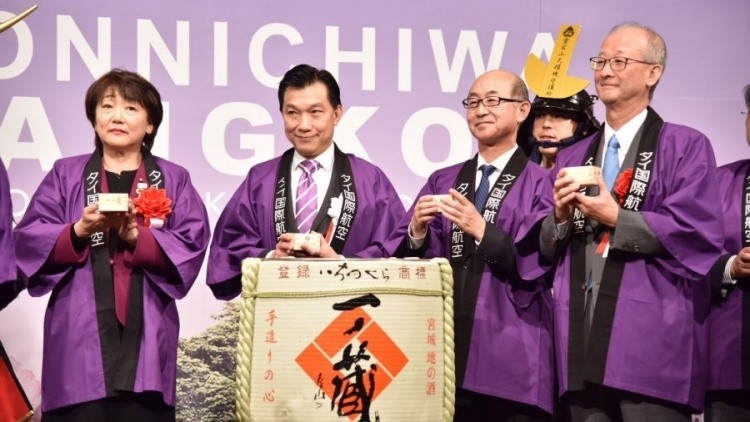 Thai Airways International (THAI) is confident that the relaunch of its Bangkok-Sendai flights last month will prove to be a success due to support from corporate customers. The flights to the Japanese city were suspended due to the political situation in Thailand.

THAI president Sumeth Damrongchaitham expected 15-20 per cent corporate customers for the Sendai destination with an estimated cabin factor of at least 80 per cent.

“Currently the flights to Sendai are 80 per cent booked as far ahead as March 2020, with roughly 60 per cent Thai customers and 40 per cent Japanese,” he said.

“THAI also partners with Toyota Tsusho [Thailand] Co Ltd under a memorandum of understanding to let its employees exclusively use THAI flights for business trips,” he added. “Meanwhile, the Sendai Airport also supports us by reducing fees for parking planes, air navigation and ground services for one year, hoping that THAI would help bring at least 100,000 passengers to Sendai annually.”

“Sendai is a high-potential tourism destination, especially during autumn when tourists come here to witness the scenic background of leaves changing colours,” said Sumeth. “As the biggest city in the Tohoku region with 11 million residents, it is only 300 kilometres from Tokyo and is also a production base of Toyota and many automobile manufacturers. For this reason, THAI is employing the ‘Sendai Model’ to penetrate corporate and business markets using partnership with Japanese companies with branches in Thailand who require frequent business travels.”

Meanwhile, Swasdiart Panikabutr, general manager of THAI South Japan Office, said that the company’s markets in Fukuoka and Nagoya were facing competition from low-cost airlines. “If the Sendai Model proves to be successful, we will consider using the same strategy in this area to secure sustainable income from corporate clients, especially in Nagoya which has more than 500 companies in the automotive industry.”