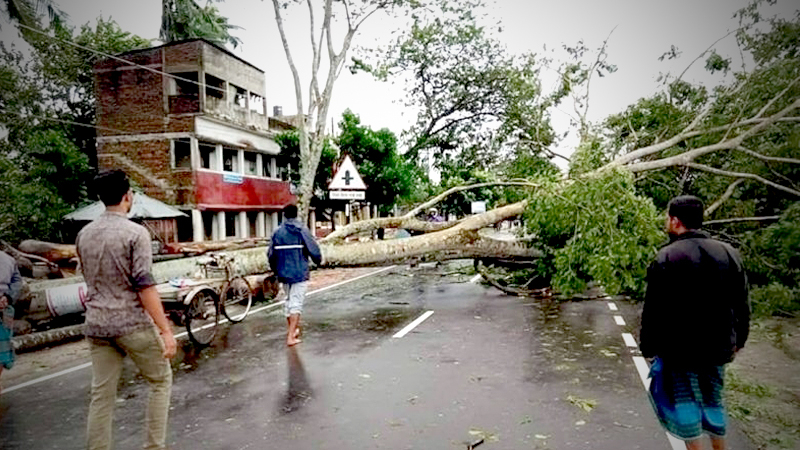 At least seven people were killed in different coastal districts as cyclone ‘Bulbul’ lashed Khulna and adjoining southwestern part of the country today before weakening into a deep depression.

In Khulna, three people died as trees fell on them when the cyclone hit the areas today, our Khulna correspondent reports.

The deceased were identified as Promila Mandal, 52, of Dacope upazila, Alamgir Hossain, 35, of Digholia upazila, and Rahman Sheikh, 78, of Rupsha Upazila.

In Patuakhali, a man was killed under a tree as it fell on him at Mirzaganj upazila in the area during the cyclone storm but further detail including identities of the victim could not be known immediately, reports our local correspondent.

In Barguna, Halima Khatun, 65, of Banai village of the upazila was killed during the cyclone storm Bulbul, our local correspondent reports quoting Anisur Rahman, UNO of the upazila.

In Barishal, a sexagenarian woman was killed as a tree fell on her during the cyclonic storm at Ujirpur municipality in Barishal this afternoon.

The deceased Ashalata Mazumder, 60, a resident of Ward No-1 of Ujirpur municipality of the district died on the spot around 2:00pm during the cyclone, Mostaine Billah, deputy commissioner of Barishal confirmed The Daily Star.

Another person died during the cyclone storm in Satkhira, our correspondent reports. Details of the incident could not be known immediately.

Meanwhile, a child, Jawat Abdullah, son of Mashiur Rahman, drowned in a canal in Pirojpur’s Bhandaria upazila during the storm this afternoon.

Besides, at least 15 people were injured in the district, our local correspondent reports.

At least 35,000 houses were damaged, roads and low-lying lands inundated resulted in suspension of all kinds of communication to Satkhira to Shyamnagar upazila due to heavy blow of the cyclonic storm ‘Bulbul’.

Apart from these, thousands of trees were uprooted and fishes of ponds and shrimp ghers washed away during the storm.

However, total amount of the damages could not be ascertained immediately.

Army personnel along with several government officials are working to bring normalcy to the affected areas in Satkhira.

In Barishal, total 3,500 houses were damaged and low-lying areas and roads went under ankle to knee-deep water.

Launch and other vehicular movement remain suspended while electricity line and internet service remained off till filing this report.