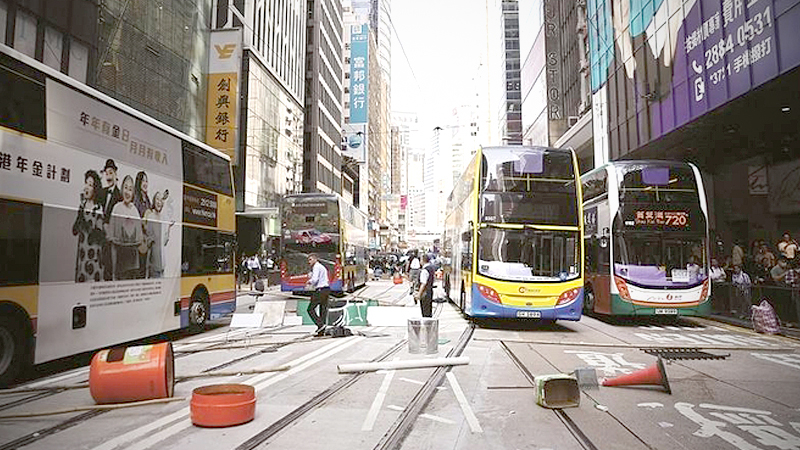 Rioters block the road in Central district. Buses and tramways are forced to stop and even a biker cannot get through. (PHOTO / CHINA DAILY)

Hong Kong stocks went into a tailspin on Monday, with the local benchmark gauge seeing its steepest single-day fall since August, as investors ran for cover amid escalating social unrest in the city and lingering Sino-US trade tensions.

He said the outlook for the hard-hit retail, hotel, catering and tourism sectors will remain bleak.

Radical protesters went on another round of rampage across Hong Kong on Monday, resorting to arson and rampant vandalism of public and private facilities and businesses as the “Extradition Bill Incident” entered its sixth consecutive month.

“We’re cautious about the situation in Hong Kong,” said Patrik Schowitz, global strategist at JP Morgan Asset Management. “It’s not an area where we, as global investors and allocators, would be looking to take a huge amount of risk,” he told Bloomberg Television.

Chris Leung Shiu-kay, executive director and chief China economist at DBS Bank Hong Kong, said the prolonged unrest has damaged Hong Kong’s economy, and the retail and tourism sectors will continue to be weak as it’s hard to predict when the chaos will end.

Singapore-based lender DBS was the first to lower its forecast of the SAR’s GDP growth for this year to zero from 2.5 percent.

The Chinese mainland’s Consumer Price Index, a main gauge of inflation, surged at a fast pace of 3.8 percent last month, driven by rising pork prices, according to official statistics released on Saturday.

The Hong Kong economy is already in a recession after having contracted 2.9 percent in the third quarter year-on-year.

The slowdown has dragged down the city’s stock benchmark, as mainland stocks account for about 50 percent of those listed on the local bourse.

On Thursday, Chinese and US officials agreed to roll back tariffs on each other’s goods as part of the first phase of a trade deal. US President Donald Trump said on Friday China “would like to have a rollback”. “But, I haven’t agreed to anything yet,” he said in remarks that unnerved the market.

Wong said it’s hard to have confidence in the market’s outlook with the uncertainties in the Sino-US trade talks and Hong Kong’s social issues.

He predicted that the Hang Seng Index, at best, would hit 28,300 by the end of the year.