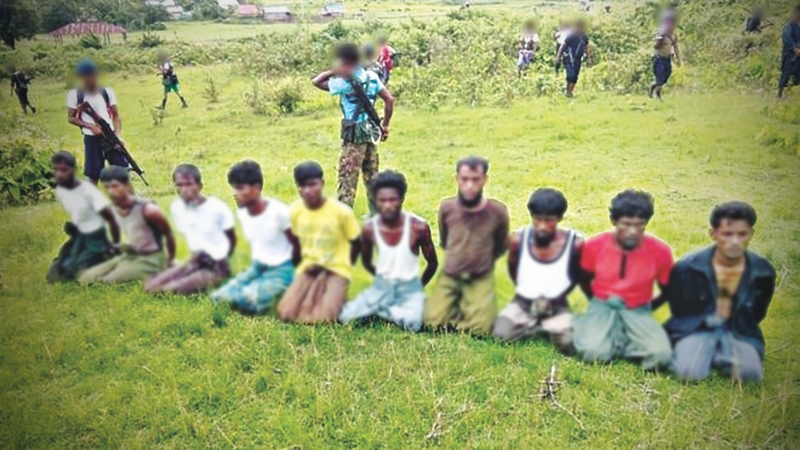 On behalf of OIC, the Gambia files the case with International Court of Justice seeking orders to stop atrocities on Rohingyas immediately

The Gambia has filed a case with the top court of the United Nations, accusing Myanmar of committing genocide against its Rohingya Muslim minority, more than two years after some 750,000 Rohingyas fled a military crackdown in the Rakhine State.

“We have just submitted our application to the ICJ under the Genocide Convention,” Gambian Justice Minister Abubacarr Tambadou said at a news conference yesterday in The Hague, where the court is based.

The International Court of Justice (ICJ), also known as the World Court, is the UN’s top legal institution that rules on disputes between states.

The West African nation, which is predominantly Muslim, has filed the case on behalf of the Organisation for Islamic Cooperation (OIC), which has held a series of meetings to encourage its 57 members to support the case.

“The aim is to get Myanmar to account for its actions against its own people: the Rohingya. It is a shame for our generation that we do nothing while genocide is unfolding right under our own eyes,” he said, reports Reuters.

Both the Gambia and Myanmar are signatories to the 1948 Genocide Convention, which not only prohibits states from committing genocide but also compels all signatory states to prevent and punish the crime.

Tambadou, who has worked for more than a decade as a lawyer at the UN tribunal that dealt with the 1994 genocide in Rwanda, assumed a position of leadership in the lawsuit because of his special expertise.

In a telephone interview, Tambadou told the New York times that he had been moved by his visit to the Rohingya refugee camps in Bangladesh.

“The world failed Rwanda when the international community did not prevent the genocide while it was unfolding,’’ he said.

“The treatment of the Rohingya is illustrative of the international community’s failure to prevent genocide in Myanmar. I thought this was not right. The world cannot stand by and do nothing.’’

Regional rights body Fortify Rights said that in October 2016 and August and September 2017 the Myanmar military deployed more than 11,000 soldiers who, along with police and civilian perpetrators, systematically massacred and raped Rohingya men, women and children, and razed several hundred villages in all three townships of northern Rakhine.

In August and September 2017 alone, some 750,000 Rohingyas fled to Bangladesh and joined some 300,000 others who had fled waves of violence since the 1980s in Rakhine, where they are denied citizenship and other basic rights.

UN investigators have said the crackdown against the Rohingyas was executed with “genocidal intent”.

The UN Independent Fact-Finding Mission reported in September this year that it has a confidential list of more than 100 names, including Myanmar officials, suspected of being involved in genocide, crimes against humanity, and war crimes, in addition to six generals it named publicly a year ago.

The civilian and military government routinely deny any wrongdoings by state security forces in the Rakhine State and reject evidence of mass atrocities on the Rohingyas. It says the crackdown targeted militant separatists in Rakhine.

Over the last two years, the UN Security Council failed to take any concrete actions against Myanmar due to opposition from China and Russia that have veto powers.

In its filing, the Gambia asked the court to grant so-called provisional measures to make sure Myanmar immediately “stops atrocities and genocide against its own Rohingya people”.

The law firm helping the Gambia, Foley Hoag, said it expected the first hearings on the provisional measures to take place next month.

Speaking to The Daily Star, Dr Imtiaz Ahmed, professor of International Relations & director of Centre for Genocide Studies at Dhaka University, said the Gambia has demonstrated its moral height when the international community has failed to take any concrete action against Myanmar.

“Myanmar will face additional pressure now. Its allies will also now come forward to help address the crisis,” he told The Daily Star.

The International Criminal Court (ICC), which also initiated an investigation into Myanmar’s crimes against Rohingyas, can hold only individuals accountable. The ICJ, however, can hold Myanmar, as a state, responsible. So, Myanmar cannot avoid replying to the ICJ, Imtiaz said.

Mofidul Hoque, trustee of the Liberation War Museum, said the filing of the case by the Gambia is an act in the right direction towards justice.

“What’s needed now is global support for the case. There is a lot to be done. The submissions to the court have to be strong. I am sure the global community will support the case,” he said.

In a statement, 10 rights bodies said the case with the ICJ will lead to the first judicial scrutiny of Myanmar’s brutal campaign against the Rohingyas.

Matthew Smith of Fortify Rights said, “All available mechanisms for international justice and accountability should be used without delay,” said.

“States should do everything in their power to ensure the case at the ICJ is well resourced and moves forward,” he added.

Meanwhile, Bangladesh welcomed the Gambia’s filing of the case.

“We welcome it. It’s OIC’s decision… this is good news that the OIC is taking some responsibility,” Foreign Minister Dr AK Abdul Momen told BSS.