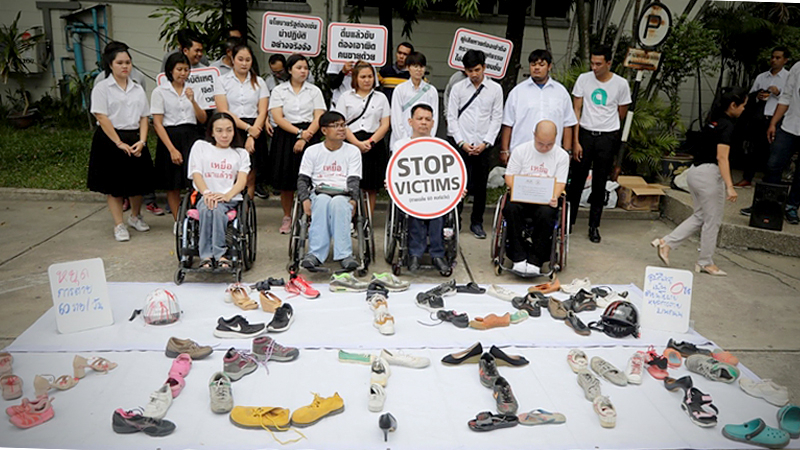 Representatives from Life Quality Improvement Network and more than 30 victims of road accidents handed in a petition to the Prime Minister at the Government House today( November 14), seeking a strengthening of traffic law and measures to reduce accidents on the roads. The letter was received by Tewan Liptapallop, Minister Attached to the Prime Minister’s Office, The visitors arranged 60 pairs of shoes into the slogan "STOP VICTIM", to raise awareness that 60 people are killed daily in traffic

Krurmads Srichan, a coordinator of the network, said it would forward four suggestions to the government, following the UN announcement designating every third Sunday in November "World Victims Day".

2. In case of drink-driving, the punishment should increase from 1-year imprisonment to 15-20 years. Stores selling alcoholic drinks to clients under 20-years old should be charged with violation of the law.

3. Increase the budget for support of road accident victims.

“Thailand ranked 9th in the world and first among Asean countries in the numbers of road accidents. I believe the government will strengthen the law and take extra measures on drink-driving, ahead of the year-end festive season ” Tewan said.