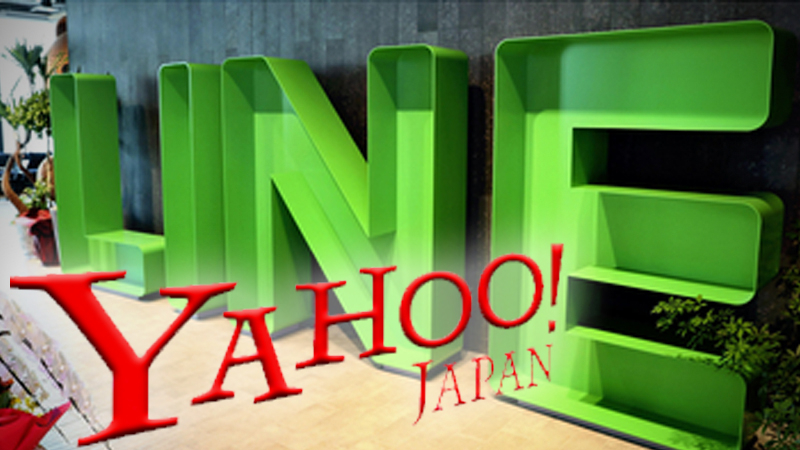 Line also stated on the day that it was pursuing the merger negotiations as part of efforts to improve its corporate value.

The merger is aimed at countering overseas IT giants’ digital platforms.

Also participating in the negotiations are ZHD and Line’s parent companies — SoftBank and major South Korean internet services firm Naver Corp. — according to sources. SoftBank holds an about 40 percent share of ZHD, while Naver owns more than 70 percent of Line’s shares. They aim to reach an agreement on the deal this month.

An option under consideration is for SoftBank and Naver to set up a joint company that would be the largest shareholder of ZHD and have Yahoo and Line under its control, the sources said. The new joint company would be a subsidiary of SoftBank.

With about 50 million users, Yahoo has been expanding its businesses through smartphone payment service provider PayPay Corp., which was set up jointly by Yahoo and SoftBank.

With the merger, Yahoo apparently hopes to shore up its entire internet business. In September, Yahoo announced its acquisition of online fashion marketplace operator Zozo Inc.

Line, which has 80 million users, is launching new businesses, such as its Line Pay cashless payment service, but it is struggling to monetize them. Judging it would be difficult to pursue growth on its own amid fierce competition, Line decided to strengthen cooperation with Yahoo and enhance its revenue base, according to sources.

In June, SoftBank increased its stake in Yahoo to 44 percent, dispatched executives and made Yahoo its consolidated subsidiary. Yahoo shifted to a holding company and changed its name to ZHD in October.

The four U.S. firms known as GAFA — Google LLC, Apple Inc., Facebook Inc. and Amazon.com Inc. — are increasing their users around the world in the area of IT platforms, the foundation of digital services. In Asia, online giants such as Alibaba.com are expanding their presence.

Yahoo Japan is strong in search services and Line in smartphone messaging services. They compete in many areas, such as smartphone payment services, but the merger will make it possible for them to expand the scale of their business and streamline their operations. They seek to secure a leading position in terms of smartphone services in Japan, preparing themselves to take on GAFA.