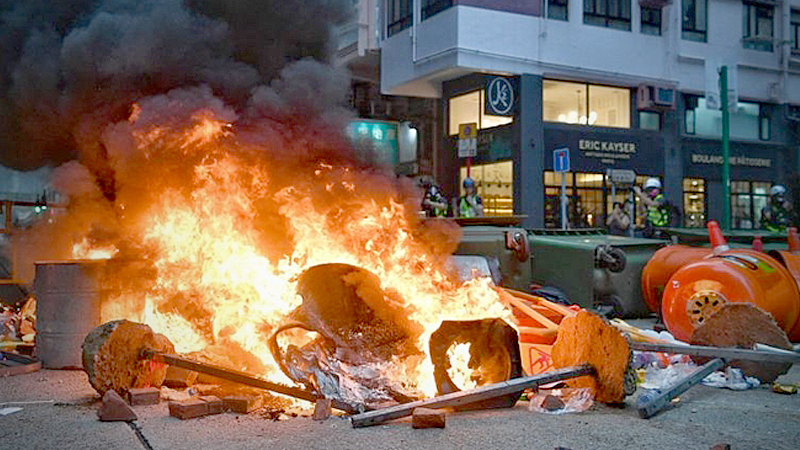 Hong Kongers on edge amid reports of evacuation of students from the mainland.

Even as the Hong Kong government dismissed intense speculation that curfew would be imposed in the city over the weekend amid mounting unrest, Chinese President Xi Jinping yesterday made clear that ending violence and restoring order was the “most urgent task for Hong Kong”.

Speaking at the Brics Summit in Brazil’s capital Brasilia yesterday, Mr Xi said: “The Chinese government’s determination to safeguard national sovereignty, security and development interests is unshakeable. The Chinese government’s determination to implement the ‘one country, two systems’ principle and oppose the interference of any outside forces in Hong Kong affairs is firm and unshakeable.”

The growing unrest has crippled the city over the past four days, with university campuses turning into the new battlegrounds between protesters and law enforcement.

Analysts said the protests, which escalated this week after a man was shot by police on Monday morning, had entered a critical phase.

The government confirmed yesterday that the police force would get reinforcements from 100 members of the Correctional Service, who will be appointed as special constables.

In a statement, the government said: “For concerted efforts to stop violence, the various disciplined services of the government… have made the greatest possible effort within their respective purview to support the police in stopping violence and curbing disorder in accordance with the law.”

Rumours of the curfew had been sparked following a late-night meeting on Wednesday called by Chief Executive Carrie Lam of top officials and advisers, which left Hong Kongers on edge.

A Chinese state-backed tabloid also tweeted, but later deleted, the possibility of a weekend lockdown.

But the Hong Kong government last night dismissed the speculation, calling it “rumours” that were “totally unfounded” in a brief and terse statement.

In an interview with the media yesterday, pro-Beijing politician Tam Yiu Chung said that, given the large resources required for an overnight curfew, the local police force of 30,000 would not be able to enforce it in a city of seven million.

The rumours of a curfew being imposed were bolstered by reports that mainland and Taiwanese students at Hong Kong universities had been evacuated over the past two days. Classes in schools have also been suspended throughout the week, adding to fears of a looming curfew.

Going into its sixth month, the unrest in Hong Kong was sparked by a since-withdrawn extradition Bill to allow fugitives to be handed over to mainland China. It has widened into a call for greater democracy and investigations of police action in quelling the protests.