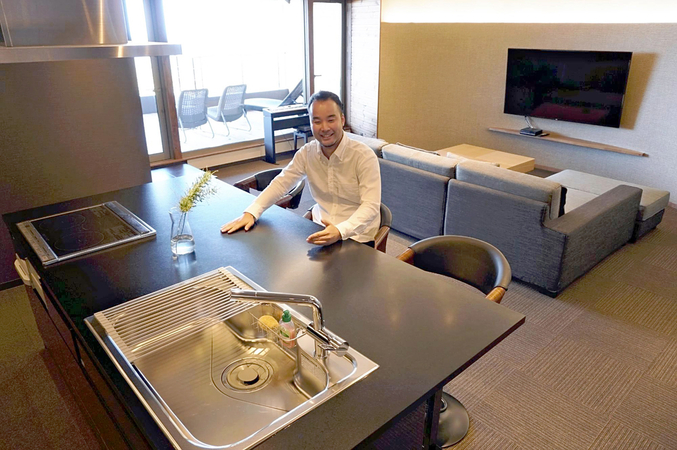 Guests at a hotel in Tottori Prefecture do not have to worry about noisy neighbours.

The hotel, which opened in October near the entrance of the pathway to Daisenji temple in the town of Daisen, has only a single room.

Equipped with a full kitchen to allow guests to cook for themselves using local ingredients, the concept of the Daisen Sando Hotel Itadaki is to give visitors an opportunity to experience the area’s charms in a way that is not possible in a typical hotel.

“We want people to fully enjoy Daisen while feeling like they’re staying at a holiday villa,” a person involved in the facility said.

The hotel opened Oct. 20 on the fourth floor of a multiuse facility called Komorebito, which has a tourist information center on the first floor and a cafe on the second floor.

The 70-square-meter room has an electric piano and a sofa in front of a large-screen television. The kitchen is equipped with a refrigerator, microwave and rice cooker, and is furnished with tableware produced at Shussaigama pottery in Izumo, Shimane Prefecture.

The wooden balcony provides a nice view of the Sea of Japan. “Guests can enjoy an extraordinary space that is different from hotels at tourist destinations, with the feel of a luxury resort condominium,” said Eisuke Kodani, 37, who came up with the idea for the hotel and is one of the representatives of Sando, the company that manages the facility.

Kodani himself is a native of the town. “I had no interest in nature, and all I thought about was leaving town as soon as I could,” he said.

He got out by attending a university in Tokyo, and hardly ever returned for a visit. However, at age 27 a chance meeting with a man who was involved in community development using local resources changed his view of his hometown.

“If you work on doing something that no one’s done before, depending on the idea, it might make the town more interesting,” he thought.

During his vacations when he returned to the town, he started planning and holding treasure hunts and other events.

In 2014, he quit the major game company he had been working for and returned home. He later joined Sando, which was established with funding from the Daisen Tourism Organization.

Hearing from hikers that Daisen lacked a place to relax and take a break, he opened the Sunset Cafe on the second floor of Komorebito in 2017. With business going well, he started planning a lodging facility on the building’s vacant fourth floor.

“The supermarkets in town are filled with cheap, tasty ingredients,” he said. “Having people actually go to stores to choose and then cook for themselves is a way of getting across what’s great about Daisen.”

Guests can choose from options such as a combination of zazen meditation and vegetarian breakfast at a pilgrims’ guesthouse, or to have a local fisherman who is also a chef come to cook fresh fish for them.

Three couples have stayed so far. The guests barbecued on the balcony or tried the vegetarian breakfast.

One said, “It was great to enjoy our meal while watching a beautiful sunset.” Another said, “It was fun to have a morning different than at a regular hotel.”

“Because it’s limited to one group a day, we can really listen to guests’ needs and provide them with the information they need, whether it’s about hot springs, shops or other things,” Kodani said. “By combining options, people can enjoy different experiences each time they come, which I hope allows them to sense the diverse attraction of Daisen.”

Rates start at ¥25,000 per person (excluding tax) based on double or triple occupancy. Reservations and other inquiries can be made on the website (https://www.komorebito.com/).