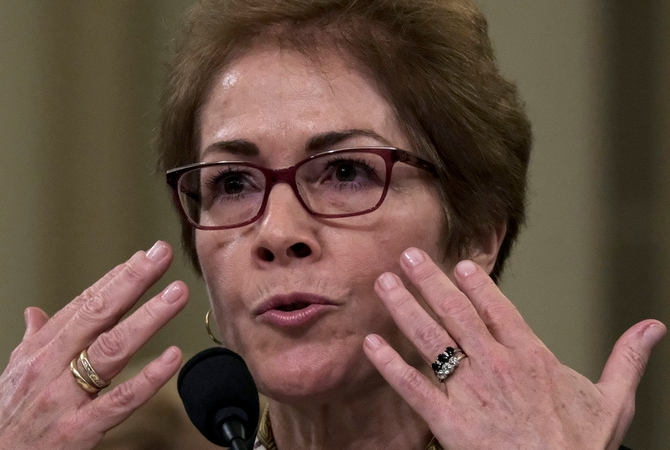 President Trump specifically inquired about political investigations he wanted carried out by Ukraine during a July phone call with a top U.S. diplomat who then told colleagues that the president was most interested in a probe into former vice president Joe Biden and his son, a State Department aide said Friday in closed-door testimony that could significantly advance House Democrats’ impeachment inquiry.

David Holmes, an embassy staffer in Kyiv, testified that he overheard a July 26 phone call in which Trump pressed U.S. Ambassador to the European Union Gordon Sondland about whether Ukrainian President Volodymyr Zelensky would “do the investigation,” according to three people who have read his opening statement and spoke on the condition of anonymity to describe its contents.

“Ambassador Sondland replied that ‘he’s gonna do it,’ adding that President Zelensky will do ‘anything you ask him to,’ ” Holmes said, according to these people.

Holmes’s testimony, first reported by CNN, directly implicates Trump in an alleged scheme at the heart of the impeachment probe, which Democrats have pursued in an attempt to prove that the president leveraged military assistance and an Oval Office meeting in exchange for investigations into Biden and a debunked theory concerning Ukrainian interference in the 2016 presidential election.

It came just hours after Marie Yovanovitch, the former U.S. ambassador to Ukraine, told the House Intelligence Committee that Trump recalled her after a “smear campaign” aimed at advancing corrupt interests in Ukraine. Yovanovitch, who said that she had felt threatened by Trump’s previous negative comments about her, was forced to respond to a fresh attack by the president while she spoke.

“It’s very intimidating,” she said after Trump took to Twitter to criticize her career during her testimony.

Holmes testified that he overheard parts of Trump’s phone call with Sondland during a lunch in Kyiv, because the president was speaking so loudly that his voice was audible through the phone to others sitting at the table nearby, according to the people familiar with the testimony.

Holmes’s testimony, which confirmed an account relayed Wednesday by acting ambassador to Ukraine William B. Taylor Jr., increases pressure on Republicans, who have dismissed other witnesses as relaying hearsay and speculation about Trump’s motives in withholding almost $400 million in aid from Ukraine. It also raises the stakes for next week’s testimony by Sondland, who will be pressed to answer questions about the call. Sondland didn’t mention the call during closed-door testimony before lawmakers last month, according to a transcript. Instead, he claimed little knowledge of any link between Biden and the investigations sought by Trump.

Holmes testified that when he asked Sondland about Trump’s views concerning Ukraine after the phone call, Sondland said Trump didn’t care about the country and was primarily interested in the investigations it could provide into allegations of corruption by Biden and his son Hunter being pushed by the president’s personal lawyer, Rudolph W. Giuliani.

During her testimony, Yovanovitch criticized Giuliani and Trump, saying “foreign and corrupt interests hijacked our Ukraine policy” with their help.

Yovanovitch said that when she first read how Trump had talked about her to his Ukrainian counterpart in a July phone call — saying ominously that “she’s going to go through some things” — the color drained from her face.

Yovanovitch’s five-hour testimony, which began with a passionate defense of American diplomacy and ended to a crescendo of applause, took a dramatic turn when Trump took to Twitter to denigrate her again as she spoke.

Trump’s attack on a widely respected Foreign Service officer — while she calmly but forcefully denounced previous attempts to smear her — drew widespread criticism, with many Democratic lawmakers calling it witness intimidation and some Republicans distancing themselves from the president’s scorched-earth tactics even as they pushed back against the Democrats’ charge.

“I can’t speak to what the president is trying to do,” she said after House Intelligence Committee Chairman Adam B. Schiff (D-Calif.) read Trump’s tweets to her. “But I think the effect is to be intimidating.”

While the second day of the House public impeachment hearings ended with both parties still firmly entrenched behind their battle lines, Yovanovitch’s highly personal testimony put Republicans on the defensive, undercutting GOP talking points with a sober account of what she called a “smear campaign” conducted by Trump’s allies in Ukraine.

While her interactions with Trump were minimal, Yovanovitch described how actions by the president and Giuliani served to undermine American interests in Ukraine. A campaign led by Giuliani and supported by corrupt officials led to her abrupt ouster from her post in Kyiv, she said.

She also methodically dismissed several Republican attempts to advance theories embraced by Trump and Giuliani, ranging from alleged Ukrainian interference in the 2016 election to the charge that Biden and his son had been involved in corruption in Ukraine.

Republicans attempted to play down Yovanovitch as irrelevant to the impeachment inquiry, pointing out just how much she didn’t know, and questioning why the Intelligence Committee was interviewing her.

“I’m not exactly sure what the ambassador is doing here today,” the panel’s ranking Republican, Rep. Devin Nunes (Calif.), said, suggesting that Yovanovitch’s predicament was little more than a personnel dispute that would be “more appropriate for the subcommittee on human resources on foreign affairs.”

Nunes and the GOP’s counsel, Steve Castor, asked Yovanovitch questions to prove her irrelevance, asking whether she was involved in preparing for the July 25 phone call between Trump and Zelensky, or whether she had taken part in plans for a White House meeting between the two heads of state, or whether she had ever spoken with Trump or his acting chief of staff, Mick Mulvaney, among other queries. Yovanovitch answered no to all of them.

“The ambassador’s not a material fact witness to any of the accusations that are being hurled at the president in this impeachment inquiry,” Nunes said.

But Trump’s tweet could ultimately make Friday’s hearing a more central part of his own impeachment.

Schiff told reporters during a break in the hearing that the nation had just seen “witness intimidation in real time by the president of the United States.” Other Democrats discussed drafting an article of impeachment related to obstruction of justice.

Some conservatives also criticized the tweet as misguided, and several Republican lawmakers contradicted Trump by praising rather than attacking Yovanovitch’s public service.

Former independent counsel Ken Starr, a frequent Trump defender, said on Fox News that the president “was not advised by counsel in deciding to do this tweet. Extraordinarily poor judgment.”

While Trump viewed the call as exculpatory, it quickly became a controversy of its own after discrepancies between the rough transcript and a previous White House readout of the call were discovered.

The White House readout, which serves as the administration’s post-call description of the conversation, said the call underscored “the unwavering support of the United States for Ukraine’s sovereignty and territorial integrity.” The readout also said Trump spoke with Zelensky about “reforms that strengthen democracy, increase prosperity and root out corruption.”

None of those topics are mentioned in the rough transcript released Friday.

The White House seemed to tacitly blame Lt. Col. Alexander Vindman, who has delivered damaging testimony against the president, for the discrepancy in the official readout offered in April and the memorandum of the phone call.

“It is standard operating procedure for the National Security Council to provide readouts of the president’s phone calls with foreign leaders. This one was prepared by the NSC’s Ukraine expert,” spokesman Hogan Gidley said Friday.

But Vindman was not responsible for making the final update to the readout, according to a person familiar with his account. The official readout was based on talking points that the president did not follow, according to a person briefed on the call who spoke on the condition of anonymity to describe internal deliberations. After the call, the White House staff did not update the readout to reflect what Trump actually said — and what he left out.

Yovanovitch’s dramatic first-person narrative of her abrupt recall this spring from Kyiv, where she had served as ambassador since 2016, dominated much of the second day of televised impeachment hearings.

In addition to criticizing the “smear campaign” that forced her to book an unexpected flight to leave Ukraine on short notice, Yovanovitch also described in detail how it felt to read a rough transcript of Trump’s July phone call with Zelensky when it was published in September — and to learn that the two world leaders had traded insults about her.

“I was shocked, absolutely shocked, and devastated frankly,” she said.

Even as she spoke, back at the White House, where aides said Trump did not plan to watch the proceedings, Trump was tweeting about the former ambassador.

“She started off in Somalia, how did that go?” Trump added, referring one of the numerous hardship postings the veteran diplomat held in her 33-year career.

“Then fast forward to Ukraine, where the new Ukrainian President spoke unfavorably about her in my second phone call with him,” Trump continued. “It is a U.S. President’s absolute right to appoint ambassadors.”

Back in the hearing room, Schiff informed Yovanovitch that the president had been tweeting about her, even as she spoke, and said he wished to give her an opportunity to respond.

She at first appeared taken aback. Schiff began to read aloud. A small smile crept onto Yovanovitch’s face, as she heard the president had blamed her for troubles in war-torn Somalia.

“I don’t think I have such powers,” she replied. “Not in Mogadishu, Somalia. Not in other places.”

She went on to say she believes she and other U.S. diplomats have made things “demonstrably better” in the nations where they have served, particularly in Ukraine, which she said has made strides in strengthening democratic institutions in recent years.

Asked later to respond to allegations that he committed witness tampering by tweeting disparagingly about Yovanovitch during her testimony, Trump pivoted and said the real tampering was done by the Democrats for not allowing the White House lawyers to ask questions or the Republicans to call their own witnesses.

“I have the right to speak. I have freedom of speech, just as other people do,” Trump told reporters at the end of a White House event on lowering prescription drug prices.

The House impeachment inquiry is expected to intensify in the days ahead, something the White House decried Friday.

“It is difficult to imagine a greater waste of time than today’s hearing, and yet unfortunately we expect more of the same partisan political theater next week from House Democrats,” White House press secretary Stephanie Grisham said in a statement.