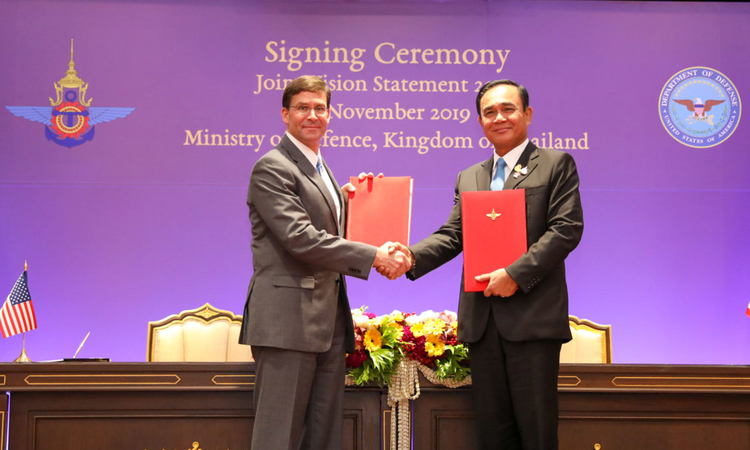 Prime Minister and Defence Minister General Prayut Chan-o-cha and US Secretary of Defence Mark Esper with the new defence alliance treaty on Sunday (November 17) in Bangkok.

Thailand and the United States have signed a defence treaty to enable stability, prosperity and sustainability in the Indo-Pacific region “in support of an inclusive and rules-based international order”.

The US-Thailand Joint Vision Statement 2020 advances the 2018 US National Defence Strategy and Thailand’s 20-Year National Strategy objectives “by reaffirming our shared commitment to the long-standing defence alliance”, according to a statement issued by the US embassy in Bangkok on Sunday. “It strengthens the special relationship with a focus on the long-term advancement of mutual interests and shared values while also promoting security cooperation capable of deterring or acting decisively to meet the shared challenges of the future”, the statement added.

Academics said the move reaffirmed US policy of putting defence, economic and other cooperation above democracy and human rights.

Titipol Phakdeewanich, dean of the Faculty of Political Science at Ubonratchathani University, said the defence alliance demonstrated that the US government does not give priority to democracy and human rights.

“It shows that the US-Thai relationship is based on mutual interests related to defence, economic and other areas of cooperation rather than promoting democracy,” he said.

Both the European Union and the US have compromised on democracy since Thailand held its general election in March even though the military still exerts considerable influence on Thai politics, he noted.

Before the election, the West did not fully engage with the former junta-backed government following the 2014 coup.

Asked if the US aimed to counter China’s influence over Thailand and Asean, Titipol said that was unlikely to be the main objective because Thailand and the US have long cooperated on defence.

The US Embassy statement said the interoperable and compatible arrangement between the US Department of Defence and the Thai Ministry of Defence would participate actively with other allies and like-minded partners to address security challenges in the Indo-Pacific region. “As demonstrated by a 65-year defence alliance, the United States and Thailand are stronger together,” the US embassy statement said.

“The defence treaty alliance, founded on the 1954 Southeast Asia Collective Defence Treaty, and later expanded under the Thanat-Rusk Communiqué of 1962, supports regional and global security by enhancing readiness, flexibility and resilience. The special relationship between the United States and Thailand, based on mutual respect and shared interests, facilitates a stable, prosperous, free, open, inclusive and sustainable Indo-Pacific region through enhanced reciprocal access and security cooperation,” the statement said. As a major non-Nato ally of the US, the two sides “recognise the importance of sustained security cooperation, including education and training, capacity-building, interoperability, and modernisation of defence and security institutions to strengthen the US-Thai defence alliance”, the statement said.

The alliance supports Thailand’s leadership role within Asean and other international security fora to advance mutual interests and reinforce the rules-based international order, the US embassy statement added.

The US and Thailand recognise and seek to maintain Asean Centrality and the important role of the Asean-led regional security architecture, including the Asean Regional Forum and the Asean Defence Ministers’ Meeting-Plus, “in promoting mutual trust and confidence-building for regional peace and stability”.

The statement said that the two sides reaffirmed the importance of a defence treaty alliance for the 21st century. “We note that defence ties complement all elements of our much broader relationship, including strong diplomatic, economic and cultural ties. We are committed to strengthening all of these important partnerships in order to achieve greater peace in the Indo-Pacific region and beyond,” the US embassy statement said.