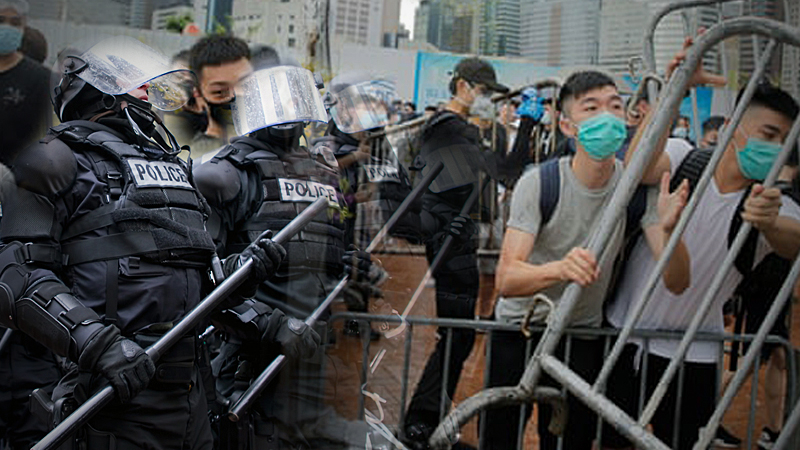 By Special To The Washington Post · Casey Quackenbush · WORLD, ASIA-PACIFIC

HONG KONG - An all day battle between police and protesters raged outside Hong Kong's Polytechnic University throughout Sunday and into the night leaving the air thick with tear gas, a police vehicle burning and official threats of mass arrest.

The standoff began early with police pummeling front line protesters at PolyU with water cannons firing irritating blue liquid and launching endless volleys of tear gas while protesters responded with barrages of molotov cocktails. At one point, a police media liaison officer was struck in the calf with an arrow.

Much of the battle centered on the bridge leading to campus from the nearby metro station which protesters had filled with barricades. As night fell, they repeatedly set it alight to prevent the police from advancing on to the university.

Police announced at 9 p.m. that the "next round of operation" was beginning, causing many to speculate that police will storm the campus. They have already threatened to arrest those involved on charges of rioting, which can incur penalties of up to 10 years in prison.

In a statement, university authorities implored its students to not engage in violence, saying it was "gravely concerned that the spiraling radical illicit activities will cause not only a tremendous safety threat on campus, but also class suspension over an indefinite period of time."The site of the university in Kowloon is next to a key cross-harbor tunnel which protesters blocked for the past few days by setting fire to the toll booths. Universities have become the latest flash points in the six months of protest that have rocked this city to its core.

In the face of an increasingly harsh police crackdown, protesters have taken up an eclectic spectrum of weapons to defend themselves, including bows and arrows and javelins - likely appropriated from campus athletic departments.

In Sunday's battles, though, protesters' key weapon appears to be petrol bombs and at one point, a police van speeding toward their barricades was set alight by a flurry of molotov cocktails and forced to retreat.

PolyU is one of the last campus strongholds after an intense week of protests centered on the semiautonomous territory's universities. After police laid siege to the Chinese University of Hong Kong last week, protesters barricaded other campuses as well as major roads, drawing the city and schools to a halt.

On Saturday, members of the People's Liberation Army, China's military, appeared on the streets to help clear up the roadblocks protesters had erected around universities, making their first appearance at the protests since the pro-democracy demonstrations erupted in June.While the PLA's presence is not unprecedented - it also appeared in September 2018 to assist with disaster relief after a severe hit from Typhoon Mangkhut - the move marks a subtle but significant development. According to Hong Kong law, which as a semiautonomous region is legally distinct from mainland China, the PLA may not interfere with local affairs unless invited by the Hong Kong government.

On Saturday, a government spokesperson denied inviting the PLA, saying it was a "voluntary community activity," according to Chinese state owned CGTN, drawing sharp criticism from pro-democracy lawmakers who said that the move was illegal and a PR stunt by Beijing to normalize the PLA's presence to the Hong Kong public.

In Hong Kong's central business district, Alex, a 35-year-old clerk at a peaceful rally said the presence of the PLA in Hong Kong was unacceptable.

"They cannot be volunteers because they are soldiers," he said, giving just his first name for fear of retribution. "They're conveying a message that they will be going out. They will take action if the situation is not getting better."

The Education Bureau, meanwhile, has announced that all classes would be canceled on Monday, following their suspension for most of last week as a strike and protesters paralyzed the city. Two university campuses have also called off classes for the rest of the semester.