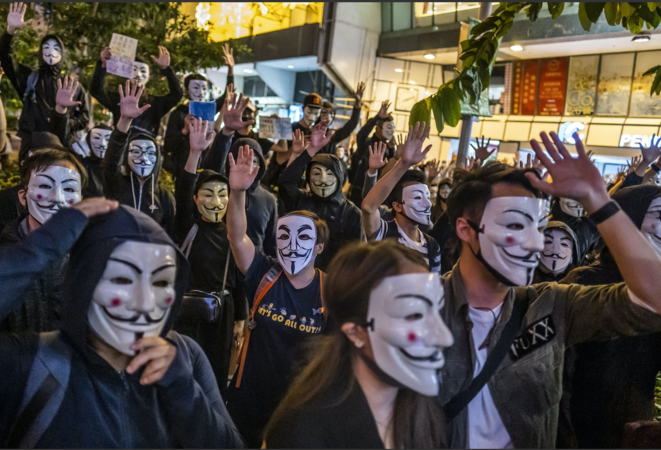 China denounced a Hong Kong court ruling that declared the government's mask ban unconstitutional, raising the specter of a direct intervention in a judicial system whose independence is often seen as a key competitive advantage of the global financial center.

The decision handed down by the High Court on Monday "seriously weakened" the power of the Hong Kong chief executive, a spokesman for the legislative affairs commission of China's Parliament said on Tuesday. The spokesman, Zang Tiewei, said the National People's Congress was the only body with the authority to interpret Hong Kong law -- a claim disputed by some in the city, including the Hong Kong Bar Association.

"No other organ has the right to make such a judgment or decision," Zang said, according to the official Xinhua News Agency. "Some NPC deputies expressed strong dissatisfaction. The legislative affairs commission of the Standing Committee of the National People's Congress expresses deep concern."

While the statement didn't say what, if anything, the NPC would do in response, the body can issue binding interpretations of Hong Kong's Basic Law -- effectively rewriting the city's rules. China's Communist Party recently indicated it would take a more assertive stance on Hong Kong, pledging in a communique to "improve" the system for deciding what the city's laws mean.

The Hong Kong Bar Association said Zang's remarks are legally incorrect and that it is the duty of the courts to "strike down unconstitutional laws," according to a statement. "Any suggestion that the NPCSC should make an interpretation or any statement, before the conclusion of the entire judicial process, that could be perceived to be intended to put pressure on the judiciary would not be helpful in maintaining respect for the rule of law."

Such a move would be controversial because it could limit the authority of the independent judiciary credited with preserving Hong Kong's role as a global business hub since the former British colony's return to Chinese rule in 1997. The government repeatedly cites an independent judiciary as a major reason more than 1,500 non-local companies have set up regional headquarters in the city.

"We'll have to wait to see what the standing committee of the NPC actually decides to do," said Ben Bland, a research fellow at Sydney-based Lowy Institute and author of "Generation HK: Seeking Identity in China's Shadow." "The rule of law has come under sustained pressure over the last few years. If they do overrule Hong Kong's courts in this case, it would be another very serious blow."

Monday's ruling came in response to a lawsuit by opposition lawmakers challenging Chief Executive Carrie Lam's Oct. 4 decision to ban face coverings during protests that have gripped Hong Kong for months. The measure -- invoked under a sweeping colonial emergency ordinance not used in more than a half century -- triggered a new wave of violent protests and has been widely ignored.

In their ruling, Judges Godfrey Lam and Anderson Chow said the ban "exceeds what is reasonably necessary to achieve the aim of law enforcement, investigation and prosecution of violent protesters even in the prevailing turbulent circumstances in Hong Kong, and that it fails to strike a reasonable balance between the societal benefits promoted and the inroads made into the protected rights."

The ruling came in the midst of a siege at a Hong Kong university with police urging pro-democracy protesters trapped inside to surrender. At a briefing on Tuesday, Lam declined to say whether the government would appeal, but police have already announced that they would stop enforcing the ban.

Although the Basic Law gives Hong Kong's courts the right to "exercise judicial power independently, free from any interference" and interpret the law while deciding cases, it includes some major caveats. Besides giving the NPC the power to issue interpretations, it also says the top parliamentary body alone can decide questions about the relationship between Hong Kong and Beijing.

The last time the NPC intervened in a Hong Kong court case in 2016, it had far-reaching consequences. At that time, the body unilaterally determined that people who advocate independence for Hong Kong can't hold public office, precipitating the removal of several elected opposition figures from the city's legislature.

Regarding the mask ban, Zang -- the spokesman for the NPC's legislative affairs commission -- argued that China's ratification of the existing British law before the handover meant the Emergency Regulations Ordinance couldn't be found unconstitutional. The NPC's statement was echoed by Yang Guang, the spokesman for the top government body overseeing the city, the Hong Kong and Macau Affairs Office.

Zhi Zhenfeng, a law professor at the state-run China Academy of Social Sciences in Beijing who follows the legislative affairs of Hong Kong, said the NPC had two choices, including waiting for an appeal to move through the courts.

"Second, the NPC may -- and actually has the power to -- make a decision at its next session to clarify that Hong Kong's High Court doesn't have the power to conduct a constitutional review, therefore their decisions are illegal," Zhi said. "So the mask ban would be effective and legalized."

"If you are coming down on a Hong Kong court like a ton of bricks and you are actually arguing that in the future, cases that involve arguments around the constitutionality of local legislation, that you have to come to China directly, what the hell are you suggesting?" Leong said. "Are you announcing to the world that this is it?"