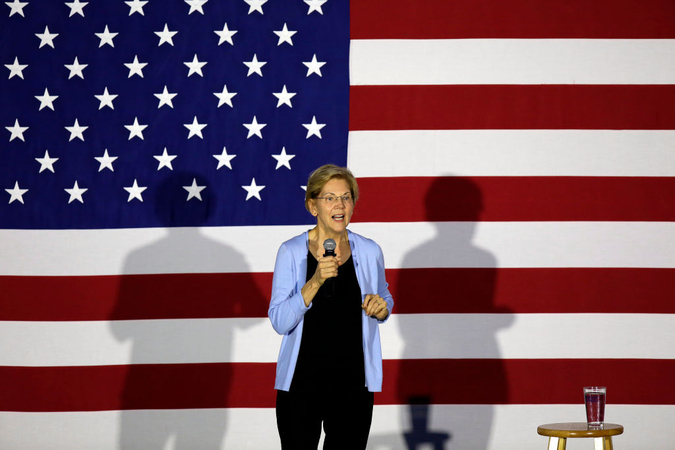 Lest anybody think that Sen. Elizabeth Warren plans to relax her offensive against Wall Street titans, the 2020 Democratic presidential hopeful now is dramatically dialing up her attacks on the private equity industry.

The Massachusetts Democrat just in the last few days has:

1. Gone after the Blackstone Group, Colony Capital, and Cerberus Capital Management for buying up foreclosed homes in the wake of the financial crisis.

2. Singled out the Carlyle Group for its role in a dispute over Taylor Swift's early recordings.

3. Accused the industry's Washington arm, the American Investment Council, of presenting a "sham study" of its contributions to economic growth.

Warren's fusillade comes as the industry takes the hot seat in a House Financial Services hearing today titled, "America for Sale? An Examination of the Practices of Private Funds." It will focus in part on the House companion to Warren's proposal, "The Stop Wall Street Looting Act," which would fundamentally remake private equity's business model.

The latest from Warren came in the form of a letter, also signed by fellow 2020 contender Sen. Bernie Sanders, I-Vt., and seven other lawmakers who have signed on to Warren's private equity proposal, to Ernst and Young. They accuse the accounting firm of cooking up an analysis with "misleading conclusions and glaring flaws" to paint a falsely rosy picture of private equity's impact on workers and wages.

"These studies are distorted and biased and misused in the regulatory and legislative and regulatory process, lending an air of legitimacy to corporate special pleading," the lawmakers write. "The new EY report, prepared with and for a trade group for the private equity industry, appears to be a picture-perfect example of such sham study."

The American Investment Council - whose CEO Drew Maloney will be testifying at the House hearing today - defended the report. "EY is a respected third-party consulting firm and their new report shows exactly how private equity supports millions of jobs across America," said Emily Schillinger, a spokeswoman for the group.

Warren's attack on Blackstone and the other firms that snapped up post-crisis real estate came in an update to her housing plan that focused on tenant protections and improved public housing conditions.

"Since the mortgage crisis, large private equity firms have become some of the country's biggest landlords - a big win for Wall Street, but a huge loss for America's renters," she writes. "Take Blackstone, one of the largest private equity firms in the world. Since 2016, more than 600 complaints have been filed against Blackstone subsidiary Invitation Homes with the Better Business Bureau, and Invitation Homes is currently facing a class action lawsuit in California for subjecting tenants to excessive and illegal late fees."

Per Bloomberg News's Misyrlena Egkolfopoulou and Heather Perlberg, Blackstone countered that it started buying homes only in 2012, once the worst of the housing crisis had ebbed. It argued that its purchases stabilized home prices in areas ravaged by the crisis.

"Though we are only a tiny percentage of the housing market, we are proud of our investments, which are helping address the housing shortage by adding high-quality, professionally managed rental housing, while contributing to local economies and creating jobs - all on behalf of our investors, which include retirement systems for millions of teachers, nurses, firefighters and other pensioners," Jen Friedman, senior vice president for global public affairs at Blackstone, told Egkolfopoulou and Perlberg.

As both sides gird for what looks like an extended fight, the truth about the industry's impact may be somewhere in the middle.

"A recent academic study by researchers from the University of Chicago, Harvard Business School and other institutions found mixed results of private equity takeovers - significant job losses following buyouts of companies traded on public stock markets but an uptick in employment after buyouts of privately held companies," Politico's Zachary Warmbrodt writes. "'This conclusion cast doubts on the efficacy of 'one-size-fits-all' policy prescriptions for private equity,' they said."