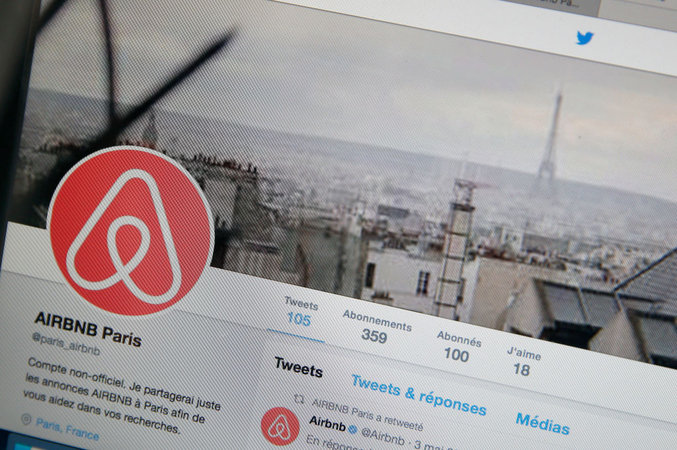 File photo:Paris City Hall Wishes To Reduce Annual Limits For Airbnb Users PARIS, FRANCE - SEPTEMBER 08: In this photo illustration, Airbnb logo is displayed on a laptop screen on September 08, 2017 Paris, France. The City of Paris wishes to reduce the maximum number of nights permitted for rental. Fixed today at 120 days a year, Paris would like to make it back down to 60, France is the second market for the Californian start-up, behind the United States.Airbnb is an online marketplace and hospitality service, enabling people to rent their flats or houses short-term. (Photo illustration by Chesnot/Getty Images)

Airbnb is partnering with the International Olympic Committee to expand accommodations in host cities through the 2028 Summer Games in Los Angeles, the two organizations announced Monday.

The short-term-rentals platform will become an official global sponsor of the Olympics in the deal, reportedly valued at $500 million, which both sides expect to be "economically empowering, socially inclusive and environmentally sustainable," they said in a joint statement.

Typically, host cities have to construct hotels, attractions and stadiums as part of sweeping infrastructure projects that routinely cost billions of dollars. When the Games are done, these new buildings often go unused, with little to no economic return; Montreal, which hosted the 1976 Summer Olympics, notably got stuck with a $1.5 billion debt that wasn't paid until 2006.

Under the Airbnb deal, cities will be able to set aside a certain number of units specifically for Olympics use. Being an official Olympics partner will boost visibility for the lodgings company and probably generate, as a result, more revenue and listings. Athletes, meanwhile, will be able to sell training sessions and other meetups with fans through what's deemed an "Airbnb Olympian Experiences" platform.

"By joining forces with the IOC and our Airbnb hosts, we're committed to providing travel experiences that benefit the global sporting community, as well as the local communities hosting the next five Olympic and Paralympic Games," the company said on its YouTube channel.

Airbnb has faced criticism in recent years as it grows into new markets and cities at an exponential pace. This month, its CEO said the company would verify each of the 7 million listings after a shooting at a California rental property, and in October, the company was the subject of a Vice investigation involving a widespread rental-listing scam.

Officials from Paris, which will host the 2024 Summer Games, are pushing back against what they're calling a "risky" deal, according to The Guardian. The city is one of Airbnb's biggest markets, with an estimated 60,000 listings.

Paris Mayor Anne Hidalgo sent a letter to the head of the IOC, expressing a desire to rein in the rentals and threatening to ban them in certain neighborhoods for "destabilising local businesses and competing harshly with traditional hotels."

"By removing a significant number of lodgings from Paris, Airbnb contributes to rising rents and worsens the shortage of apartments on the rental market, at a cost for all Parisians, in particular the middle class," Hidalgo wrote.

Airbnb has said it is working with local governments to implement new home-rental rules in an attempt to cut down on scam listings, multiple-property hosts and limits on renting when spaces violate local property rules.

In a joint news conference, the company and the committee expressed excitement and a positive vision for the venture.

"Since it was founded in 2008, Airbnb has grown to become a global household name. This partnership supports the future sustainable operations of the Olympic Movement and demonstrates the ongoing appeal of the Olympic commercial programmes to the world's leading brands," the IOC said in a statement.