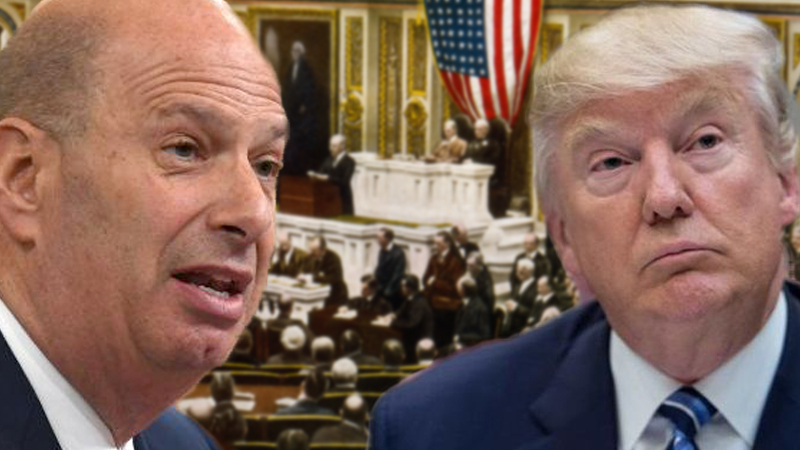 WASHINGTON - The most anticipated - and potentially most important - witness in the House's impeachment inquiry is testifying Wednesday. European Union Ambassador Gordon Sondland is the closest figure to President Donald Trump to take the stand, and in his opening statement, he directly connected Trump to the Ukraine quid pro quo.

Below are some key takeaways from his opening statement. We'll add more throughout the hearing.

1. Connecting this to the president

Pretty much every witness to date has said there was something unholy going on with regard to asking Ukraine to launch specific investigations, including one involving the Bidens. But none of them have been able to testify to the idea that Trump actually ordered U.S. aid or a White House meeting would be conditioned upon those investigations.

In his opening statement, though, Sondland walks right up to the line, if he doesn't cross over it. He also takes aim at Trump's personal lawyer, Rudy Giuliani.

"Fourth, as I testified previously, Mr. Giuliani's requests were a quid pro quo for arranging a White House visit for president ," he said. "Mr. Giuliani demanded that Ukraine make a public statement announcing investigations of the 2016 election/DNC server and Burisma. Mr. Giuliani was expressing the desires of the President of the United States, and we knew that these investigations were important to the President."

Sondland says that he testified to this previously, but it's more plainly stated here that Giuliani "was expressing the desires of the president of the United States" when he conveyed the quid pro quo.

At another point, Sondland says that in his July 26 call with Trump - the day after Trump's call with Ukraine President Volodymyr Zelensky - that he would have been surprised if Trump hadn't mentioned the investigations, "particularly given what we were hearing from Mr. Giuliani about the President's concerns."

It's tempting to say Sondland is implicating Trump. That's not completely the case in this statement. But he seems to be saying this was all something that Trump blessed, which is significant.

In many ways, Sondland's testimony is worse for Trump than Tuesday's hearing featuring former special envoy to Ukraine Kurt Volker and former White House aide Tim Morrison. And in one key respect, it contradicts it.

In his testimony on Tuesday, Volker was asked about Trump's May 23 order that he, Sondland and Energy Secretary Rick Perry were to "talk to Rudy," and he suggested it wasn't a direct order.

"I didn't take it as an instruction, I want to be clear about that," Volker said,. adding: "You know, when we were giving him our assessment about President Zelensky and where Ukraine is headed, he said, 'That's not what I hear. I hear terrible things, he's got terrible people around him. Talk to Rudy.' And I understood in that context, him just saying, that's where he hears it from. I didn't take it as an instruction.

Volker said it was just "part of the dialogue."

But Sondland is clear on this point: that it was an order.

"In response to our persistent efforts to change his views, President Trump directed us to 'talk with Rudy,' " Trump said. "We understood that 'talk with Rudy' meant talk with Mr. Rudy Giuliani, the President's personal lawyer."

"Directed us" is an order. It's an instruction. And it again connects this whole effort to Trump - in a way Volker declined to.

3. Blaming his dodgy testimony on the administration

Sondland said repeatedly in his opening statement that the State Department and the White House didn't allow him access to the things he needed to provide accurate previous testimony. Hence the inconsistencies and the clarifications, apparently.

"But, I also must acknowledge that this process has been challenging and, in many respects, less than fair," Sondland said. "I have not had access to all of my phone records, State Department emails and other State Department documents. And I was told I could not work with my EU staff to pull together the relevant files."

He added that he has never been a "note-taker," meaning the absence of this information made his recollections even more difficult.

Sondland doesn't sound at all happy that he's in this spot and seems to believe the administration and Giuliani put him in it. We'll see how that manifests itself in the rest of the hearing.