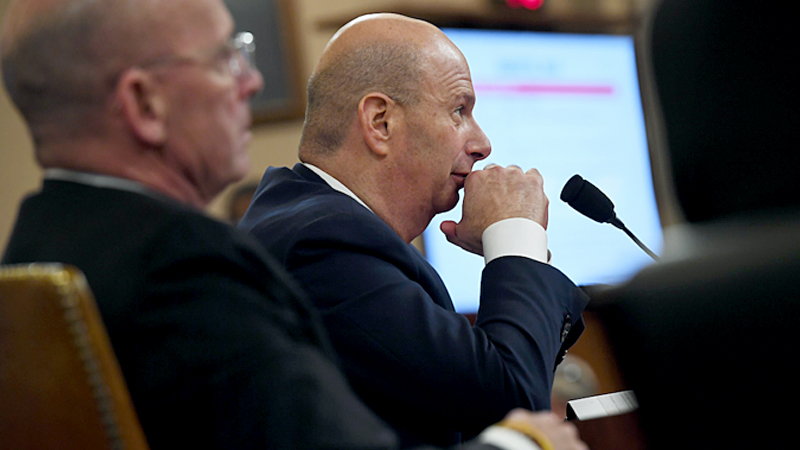 WASHINGTON - Ambassador Gordon Sondland said Wednesday that the Trump administration blocked him from accessing records, emails and other documents,adding new ammunition to Democrats' charge that the White House is trying to cover up its activities in Ukraine and potentially paving the way for an article of impeachment on obstruction.

The revelation that the State Department and White House have been keeping materials away from not just Congress, but current government employees as well, is the latest example of what Democrats argue is a concerted campaign to block their impeachment investigation.

Sondland, the U.S. ambassador to the European Union, testified Wednesday that Trump and his personal lawyer, Rudy Giuliani, sought to condition a White House invite for Ukraine's new president to demands that his country publicly launch investigations that could damage President Donald Trump's political opponents. He also testified that he believed nearly $400 million in security assistance was being held up to secure those same probes, because "two plus two equals four."

Sondland, who by his own admission is "not a note taker," blamed the omissions and memory lapses he had during a closed-door deposition last month on the fact that he couldn't review his communications - and still has not been provided records of at least one pivotal phone call with Trump.

However, Sondland was able to provide the committee with some new material, including emails that showed officials at the highest echelons of the Trump administration were aware of or involved in plans to get Ukraine to publicly commit to conduct investigations that could politically benefit Trump.

Democrats said those emails combined with what Sondland says was kept from him validates their suspicions.

"Based on a sample of the documents attached to Ambassador Sondland's statement . . . we can see why Secretary [of State Mike] Pompeo and President Trump have made such a concerted and across-the-board effort to obstruct this investigation," Intelligence Committee Chairman Adam Schiff, D-Calif., said at Wednesday's hearing. "They do so at their own peril: I remind the president that Article III of the impeachment articles drafted against President Nixon was his refusal to obey the subpoenas of Congress."

Once the Intelligence Committee completes its investigation, the House Judiciary Committee would be responsible for drafting articles of impeachment. The panel and then the full House would vote on those articles, the equivalent of charges against the president. The Republican-led Senate would hold a trial to decide Trump's fate.

Sondland produced emails showing that days before Trump and Ukrainian President Volodymyr Zelensky spoke on July 25, he discussed how Zelensky was ready to commit to investigations and "turn over every stone" with Pompeo, acting White House chief of staff Mick Mulvaney and Energy Secretary Rick Perry.

"Everyone was in the loop. It was no secret," Sondland testified, noting later that Pompeo, Mulvaney and Perry could be "key witnesses" in the House's probe.

"Gordon Sondland never told Secretary Pompeo that he believed the President was linking aid to investigations of political opponents," Ortagus said. "Any suggestion to the contrary is flat out false."

Sondland testified that he still has not been able to access all the records he sought from the White House and State Department, noting that they "cannot locate" a record of his phone call with Trump on Sept. 9 - the one in which Trump insisted there was no quid pro quo regarding military aid and Ukraine. That call occurred on the same day that House Democrats launched their probe into Trump and Ukraine. It also was the same day that Intelligence Community Inspector General Michael Atkinson alerted Congress to an "urgent concern," later revealed to be a whistleblower's complaint.

"Having access to the State Department materials would have been very helpful to me in trying to reconstruct with whom I spoke and met, when, and what was said," said Sondland. He has now twice updated the substance of his testimony since claiming he did "not recall" several details during his October deposition.

Sondland's revelations implicated senior members of the Trump administration, and he made clear there are emails, phone records and documents that could have a bearing on the House impeachment investigation. But it is not clear whether House Democrats will run down all the new leads, as doing so would likely require them to issue new subpoenas and double down on existing ones in the courts.

Democrats have repeatedly expressed a reluctance to get bogged down in legal proceedings and leaders are committed not to lose the momentum of the public impeachment hearings, which are on course to feature a dozen witnesses in less than two weeks. Senior Democrats have indicated that the House is on track to vote on impeachment next month.

Yet several members have acknowledged that there could be value in securing the testimony of holdouts like Pompeo and former national security adviser John Bolton, neither of whom have yet been subpoenaed for testimony.

Bolton's potential testimony hangs in the balance of a court case filed by his former deputy Charles Kupperman, requesting a formal ruling on whether congressional subpoenas outweigh White House orders.

Pompeo, meanwhile, has thus far flouted a subpoena to turn over State Department records in the impeachment probe, according to Schiff, raising questions about what other documents may exist in government files. His refusal to engage also raises questions about whether Pompeo would comply with a separate subpoena for his testimony. The White House said in an Oct. 8 letter that the administration would not cooperate with the impeachment probe; Mulvaney already rebuffed a subpoena for a deposition earlier this month.

But according to Sondland's emails, Pompeo not only knew but approved of the ambassador's plans. In an Aug. 22 email, Pompeo endorses Sondland's suggestion that Zelensky "look [Trump] in the eye" in Warsaw and tell him that he "should be able to move forward and with confidence on those issues of importance to Potus and the US" - meaning the investigations into 2016 and Burisma.

Sondland said the "issues of importance" to Trump were the 2016 and Burisma investigations - and that Pompeo would have understood the reference too, having listened to the president's July 25 call with Zelensky.

The 2016 investigation is a reference to the debunked theory that Ukraine, not Russia, interfered in the presidential election.

Sondland also insisted that he did not have as much insight into Trump's thinking as others regarding Ukraine. To illustrate, he pointed to Mulvaney's October news conference, in which the acting chief of staff said that aid is withheld as leverage "all the time. . . . Get over it."

Sondland said that he had not heard directly from Trump that the release of aid was "conclusively tied" to the promise to conduct investigations, he "was presuming." But Mulvaney was in a position to say with authority whether the two were linked, and "he said yes, it was," Sondland testified.