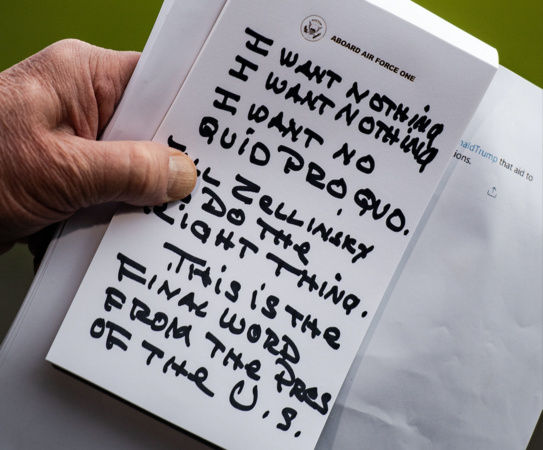 For about a week at the beginning of September, with aid to Ukraine on hold and a deadline for its release approaching, the Trump administration's diplomatic team in that country was scrambling. It wasn't clear why the aid was being held back or how it would be released.

On Sept. 1, William Taylor, the acting U.S. ambassador to Ukraine, heard through the grapevine that Gordon Sondland, the U.S. ambassador to the European Union, had explicitly linked the release of aid to the need for Ukraine to announce investigations that would benefit President Donald Trump politically, a link to which Sondland himself later admitted.

Taylor texted Sondland to ask whether it was the case that aid was predicated on the investigations Trump was seeking. Sondland asked him to call, then telling Taylor (according to Taylor) that, in essence, it was.

"As I said on the phone, I think it's crazy to withhold security assistance for help with a political campaign," he wrote, referencing the utility of the investigations to Trump's 2020 bid.

This time, Sondland didn't reply immediately; instead, he called Trump. During his testimony before the House impeachment inquiry on Wednesday, Sondland explained that his connection of aid to the investigations was his own assumption, the product of his adding two and two to get four.

"Pretty much the only logical conclusion to you that given all of these factors, that the aid was also a part of this quid pro quo?" House Intelligence Committee Chairman Adam Schiff, D-Calif., asked Sondland.

It was in that context that Sondland described calling Trump after Taylor had messaged him.

"I finally called the president. I believe it was on the 9th of September; I can't find the records and they won't provide them to me," Sondland told the House committee. "But I believe I just asked him an open-ended question, Mr. Chairman. What do you want from Ukraine? I keep hearing all these different ideas and theories and this and that. What do you want?"

Speaking to reporters outside the White House on Wednesday, Trump seized upon that testimony as exculpatory. Reading from handwritten notes, he reiterated what Sondland had said and declared the testimony the final word on the matter.

"Just a quick comment on what's going on in terms of testimony with Ambassador Sondland," Trump said. "And I just noticed one thing and I would say: that means all over."

He repeated the "what do you want" question several more times, interrupting it briefly to assert that, contrary to Sondland's testimony about his demeanor during the call, he is "always in a good mood."

"And now, here's my response that he gave. Just gave," Trump said. "Ready? You have the cameras rolling?"

Another aside, this time about how he barely knows Sondland and how Sondland supported someone else in the 2016 Republican primary.

"Thank you, folks," Trump concluded. "Have a good time." He then walked to the waiting helicopter.

"Ambassador Sondland's testimony made clear that in one of the few brief phone calls he had with President Trump, the President clearly stated that he 'wanted nothing' from Ukraine and repeated 'no quid pro quo over and over again,' " the statement said. "In fact, no quid pro quo ever occurred. The U.S. aid to Ukraine flowed, no investigation was launched, and President Trump has met and spoken with President Zelensky. Democrats keep chasing ghosts."

Far from exculpatory, that line of argument from Trump and Grisham is almost meaningless.

For one thing, Sondland's testimony explicitly and in detail outlined what he described without reservation as a quid pro quo - one focused on an effort to leverage an official White House meeting to pressure Ukraine to announce new investigations. The claim that "no quid pro quo" ever occurred is the opposite of what Sondland testified. It's just that the quid pro quo that Sondland expressly articulated isn't the one that was the subject of that call.

Also, notice who is originally denying the quid pro quo. This isn't Sondland telling House investigators that there was no quid pro quo for Ukrainian aid, it's Sondland saying that Trump said there was no quid pro quo. It's like a man on trial for arson standing up at his trial and insisting that he must be innocent because one of the witnesses described how the accused arsonist himself had denied setting the fire. Sondland is conveying Trump's own insistence of innocence. Trump doesn't get to then claim that this proves his innocence.

Especially since Sondland made clear in his testimony that he didn't necessarily buy Trump's assertions. After describing the call with Trump, he went on to explain the message he sent back to Taylor.

"So I typed out a text to Ambassador Taylor. My reason for telling him this was not to defend what the president was saying, not to opine on whether the president was being truthful or untruthful, but simply to relay, I've gone as far as I can go," Sondland said. "This is the final word that I heard from the president of the United States. If you're still concerned - you, Ambassador Taylor, are still concerned - please get a hold of [Secretary of State Mike Pompeo]. Maybe he can help."

This part of the testimony - not mentioned by Trump - makes clear that Sondland is making no representations about the accuracy of Trump's comments. In fact, he's explicitly saying he wasn't asserting that Trump's denials were true. To extend the analogy above, it's like the accused arsonist failing to mention that the witness described his denial but then added, "which may or may not be true."

It's worth noting the timing here. The whistleblower complaint that led to the Ukraine investigation was filed on Aug. 12. The White House became aware of it at some point after that. On Sept. 9, the House and Senate intelligence committees were informed about the complaint. That same day, House Democrats announced an investigation of the withholding of aid to Ukraine, perhaps in part because of a Sept. 5 Washington Post editorial in which the aid halt was tied to Trump's desire for investigations.

Again, even if Sondland were saying that Trump hadn't engaged in quid pro quo on the aid, he explicitly elsewhere in his testimony said there was a quid pro quo related to a White House meeting. That, in itself, raises questions about how Trump leveraged his position to generate something of benefit to himself.

Remember that we have Trump on record elsewhere in his own words describing what he wanted from Zelensky. In the rough transcript of the July 25 call between Trump and Zelensky, Trump asks Zelensky to investigate former vice president Joe Biden, a political opponent of Trump. If this is the "right thing" that Trump was describing when he spoke with Sondland, it's not exactly helping his case.