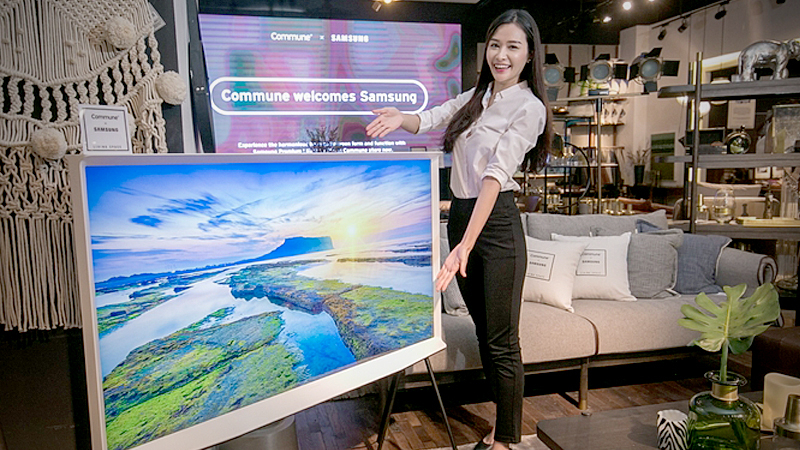 South Korean manufacturers claimed nearly half of the global TV market as of the third quarter of this year with Samsung Electronics’ solid lead in the large premium TV segment, according to market data on Wednesday.

Recent data from market researcher IHS Markit showed that Samsung and LG accounted for a combined 46.2 percent of the global market in terms of sales value in the third quarter.

The combined share of the two Korean TV makers stood at 48.1 percent in the second quarter.

Samsung topped the list with 30.3 percent in terms of sales value. The Korean electronics giant retained the top spot for the second straight quarter, according to the researcher.

In terms of shipment volume, Chinese TV providers slightly outpaced their Korean rivals at 33.5 percent, but the companies’ share of the market in terms of sales value stood at 23.2 percent -- only half of the Korean firms’.

The data showed the Chinese companies shipped out more products than their Korean competitors, but the Chinese products were cheaper.

Despite the wrangling over picture quality in September between Samsung and LG, Samsung managed to ramp up sales of its flagship premium QLED TVs in the third quarter.

Samsung is aggressively expanding its marketing and sales activities for QLED TVs across the world.

On Wednesday, the company opened a TV experience zone at lifestyle brand Commune’s shop in Millenia Walk in Singapore as it started rolling out its QLED-equipped The Serif TV in the country.

LG’s organic light-emitting diode TVs, however, showed stalled growth this year. Its OLED TV sales volume edged up 1 percent from 1.05 million units as of September 2018 to 1.06 million as of this September.