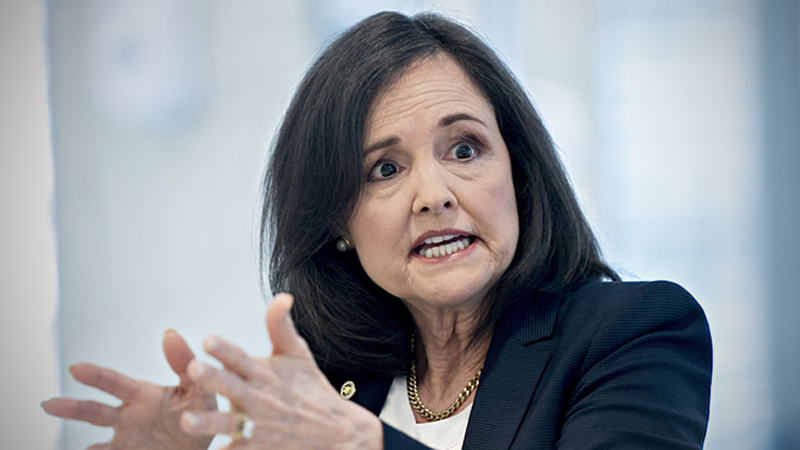 Judy Shelton speaks during a Bloomberg Television interview in Washington on May 29, 2019. MUST CREDIT: Bloomberg photo by Andrew Harrer.Photo by: Andrew Harrer — Bloomberg

Judy Shelton, one of President Donald Trump's most recent picks for the Federal Reserve board, challenged an article of faith regarding the U.S. central bank in private comments to a bank executive last month: that it should operate free of political influence.

Shelton shared her views on monetary policy and the Fed with Beat Siegenthaler, global macro adviser for UBS Group, after speaking at an event on Oct. 18 in Washington on the sidelines of the International Monetary Fund annual meetings.

"I don't see any reference to independence in the legislation that has defined the role of the Federal Reserve for the United States," Shelton told Siegenthaler, according to a transcript of the interview.

Shelton confirmed she had spoken with Siegenthaler and a UBS spokesman declined to comment. The transcript was shared with the bank's institutional clients, according to a person familiar with the matter.

If people were to read the law, "they would see that it demands that the Board of Governors of the Federal Reserve work hand-in-hand with Congress and the president to meet certain strategic economic goals for the U.S.," Shelton added.

It is unusual for someone the president intends to nominate for the Fed board to speak publicly before the Senate considers her for the post, and even rarer for a Fed nominee to question the central bank's independence. The remarks may complicate Shelton's nomination, should Trump proceed to send it to the Senate. The White House has yet to officially nominate Shelton or another person Trump has said he intends to put on the Fed board, the St. Louis Fed's director of research, Christopher Waller.

Some Republicans on the Senate Banking Committee, which would consider Shelton's nomination, have expressed concerns about her to the White House, citing her unconventional views on monetary policy, according to people familiar with the matter. Shelton and Waller's paperwork was expected to be sent to the Senate in September, but now may be delayed until next year as the White House waits for the candidates to complete ethics requirements, the people said.

They asked not to be identified discussing a personnel matter. The White House didn't immediately comment.

Shelton agreed to an interview with Siegenthaler because she had seen him conduct similar question-and-answer sessions with other notable economists, she said in an email. She was not compensated for her time with the UBS economist, she said.

Before Trump, presidents were measured in their public criticism of the Fed in order to avoid appearing as if they sought to influence the central bank's conduct of monetary policy. Fed independence is considered a given among investors who buy U.S. debt, financing the government's budget deficit, who assume the central bank will ignore political pressure to keep interest rates artificially low.

But Trump has turned that tradition on its head. He regularly criticizes the Fed and the Fed chairman he appointed, Jerome Powell, calling him an "enemy" of the U.S. and a "bonehead" in tweets for not cutting interest rates farther and faster, asserting that the central bank is braking what would otherwise be a runaway economic boom.

The president met with Powell on Nov. 18 at the White House to discuss some of his frequent complaints. Lately, he has said that the Fed should set interest rates below zero to keep up with countries that have been able to sell debt at negative rates.

In that light, Shelton's comments are in line with the philosophy of the man who would nominate her. She told Siegenthaler that the Fed "is by its nature a creation of Congress," adding that if it insists on independence it should be more transparent about its activities with lawmakers.

"It's in some ways healthier that criticism from the White House is out in the open. At least we know how the president feels," Shelton said in the UBS interview.

The Federal Reserve isn't promised independence under the Constitution, but like many American institutions it has internal checks and balances. The monetary policy committee, at full strength, has seven politically-appointed board members, but also five of the 12 regional bank presidents who are appointed by independent boards. The committee could also elect its own chairman if it wasn't happy with the president's choice.

Board members serve staggered terms which can protect political diversity. And economic researchers have long concluded that the central bank's independence is associated with better economic outcomes.

Shelton told Siegenthaler that the 1978 Humphrey-Hawkins Act was meant to bring together the Fed, Congress and the president to "pursue a sound and stable and orderly international monetary system."

Shelton's nomination would be a test of whether Congress is willing to allow an economist with unorthodox views to fill one of seven seats on the Fed's board. She has previously questioned the Fed's so-called "dual mandate" to contain inflation and maximize employment, and she has also publicly mused about returning the U.S. to the gold standard, a move that many mainstream economists believe would damage the economy and handcuff the Fed in the event of a recession or other crisis.

Since Trump said he would nominate her, Shelton has participated in numerous interviews with news organizations, sometimes publicly advocating for the Fed to cut interest rates and questioning the central bank's statutory mission, which is set by Congress.

White House officials have asked her to stop agreeing to interviews, according to people familiar with the matter, out of fear that she may say something inflammatory that could scupper her confirmation in the Senate.

Shelton said she plans to continue contributing to global discussions on monetary policy and that she encourages policy makers to be accessible and transparent.

Shelton's comments to UBS' Siegenthaler also revealed her view that the Fed is being bullied by markets. She told him that the Fed "wouldn't dare pull the monetary rug out from under market expectations, even if it wanted to discipline" them.

"Someone could say that it's the central banks that are the currency manipulators," she added.

"All it takes is an announcement by, say, the head of the ECB that we're looking at more stimulus measures" to weaken the euro against the dollar, she said, referring to the European Central Bank. "That does affect our trade outlook."

While Trump has filled four of the Federal Reserve's seven board seats and won Powell's confirmation as chairman, he has struggled to find candidates acceptable to the Senate for two remaining vacancies. Four people Trump previously said he would nominate failed to advance even as far as a confirmation hearing, raising questions about the White House's vetting procedures.