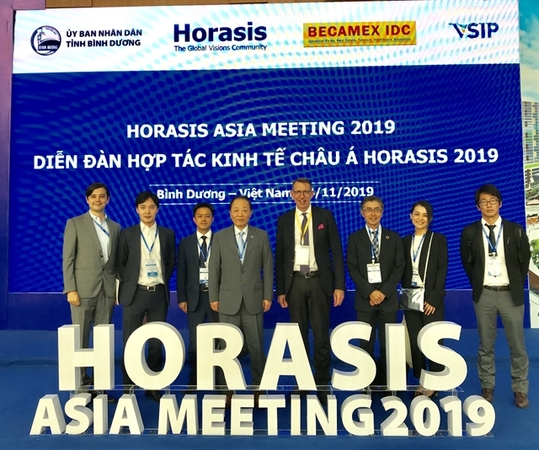 Delegates pose for photos during a break at the opening plenary session held yesterday as part of the 2019 Asia Horasis Meeting that officially begins today. VNS Photo Bồ Xuân Hiệp

BÌNH DƯƠNG — Việt Nam has emerged as a new economic star in the Southeast Asia region, with its southern province of Bình Dương poised to become a new centre for global dialogue in the near future, the chairman and founder of Horasis said yesterday at one of Asia’s largest economic forums.

More than 400 top leaders from across Asia and 500 government officials and top executives from businesses in Việt Nam are participating in the 2019 Horasis Asia Meeting that officially opens today in Bình Dương Province.

Speaking on the sidelines of the opening plenary session yesterday, Dr. Frank-Jürgen Richter, said: “We’re very impressed with the potential of the Vietnamese economy and Bình Dương Province, which is one of the country’s major economic hubs with strong industrial development. That’s why we chose Bình Dương to host the Horasis Asia Meeting again this year.”

“The province has all the conditions to become one of Asia’s most attractive investment destinations and a new financial hub in the region,” he told Việt Nam News.

“Bình Dương boasts good infrastructure with a state-of-the-art conference centre, and we have had great support from the local government as the host of our meeting,” he noted.

“The province has attracted attention from investors from all parts of Asia such as Japan, China, Indonesia, South Korea and the rest of Southeast Asia,” he said.

To lure even more foreign investment, the province should diversify its portfolio, and not only focus on manufacturing but also raise the profile of knowledge-based industries such as blockchain, AI and, IoT, Richter said.

The world is at a crossroads, and Asia with its exposure to a highly volatile geo-political and geo-economic context, is no exception, according to speakers at the meeting.

Asian economies should grasp opportunities emerging from rampant change in an era of disruption to achieve inclusive growth.

With uncertainty stemming from the US-China trade war, many businesses are looking at other production locations in the wider Asia Pacific region. Việt Nam is set to benefit the most from the trade war, according to Richter.

“I very much believe that Việt Nam, with strong economic fundamentals coupled with firm government commitment to more open trade and investment, will soon achieve a double-digit growth rate of 10-12 per cent in the near future,” he said.

According to the World Bank in Việt Nam, in the short and medium term, Việt Nam’s economic outlook is expected to be positive despite signs of cyclical moderation in growth.

After peaking at 7.1 per cent last year, real GDP growth is projected to slightly decelerate at 6.6 per cent this year, led by weaker external demand and continued tightening of credit and fiscal policies.

Annual headline inflation has been stable for seven consecutive years (at single digits), trending towards 4 per cent and below in recent years, according to the World Bank.

The country’s gross domestic product (GDP) growth, however, was expected to exceed 6.8 per cent this year, backed by robust exports and foreign investment, he said, adding that the country aims to keep inflation below 4 per cent next year.

Việt Nam’s foreign exchange reserves had reached a record high of US$73 billion.

However, the country’s pace of privatisation of state-owned enterprises and pace of budget spending on infrastructure had been slower than expected, according to Phúc.

“CEOs and investors from Southeast Asia, Japan, South Korea, India and the rest of the world have already come to seek investment opportunities in the province today,” he said.

During the two-day event, entrepreneurs from around the world will discuss Asian enterprises’ rise to global eminence.

Participants will also examine the state of the global economy and Asia’s role in shaping it.

The 2019 Horasis includes four plenary and dialogue sessions related to key issues in the current globalisation era such as new trends in economic and trade development and achievements in science and technology.

Delegates will also attend the 15th Asia International Science Conference on Urbanisation, which is expected to launch various IT projects.

Horasis is a global visions community committed to providing a platform for companies from emerging and developed markets to seek global partners.