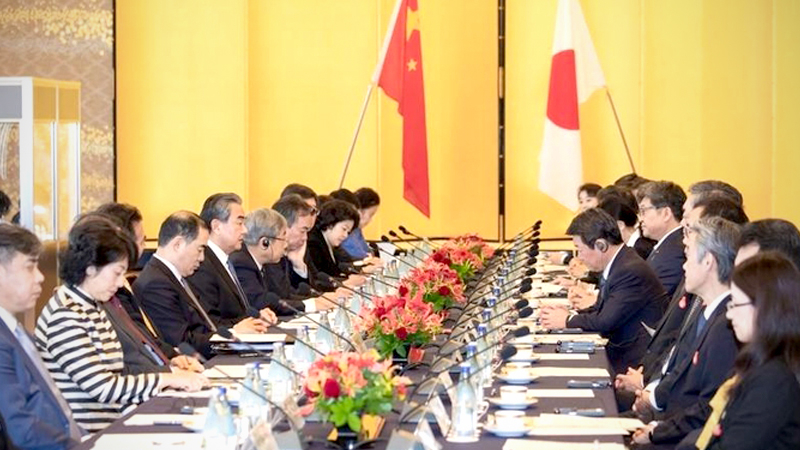 TOKYO — China and Japan launched a high-level consultation mechanism on people-to-people exchanges in Tokyo on Monday, with both sides vowing to push for greater development of people-to-people and cultural exchanges between the two countries in the new era.

Wang said the establishment of a high-level consultation mechanism on people-to-people exchanges between China and Japan is an important consensus reached by the two leaders, which represents their deep expectations.

China is ready to strengthen overall planning with Japan to further expand personnel exchanges, enrich cultural exchanges, strengthen guidance and shaping of public opinion, promote exchanges and mutual learning between civilizations, and enhance mutual understanding and friendship between the two peoples, so as to build a strong cultural bond and a solid public support for the long-term development of bilateral ties, he added.

Motegi called on the two sides to give full play to the role of the high-level consultation mechanism on people-to-people exchanges, actively carry out such exchanges and cooperation in culture, sports and tourism to push for greater development of people-to-people and cultural exchanges in the new era.

China, Japan ties back on track

During the meeting between the two foreign ministers on Monday, Wang said that with the political guidance of the two leaders and joint efforts of both sides, China-Japan relations have returned to the right track and have seen a sound momentum of improvement and development.

It is hoped and believed that with the joint efforts of both sides, the major political and diplomatic agenda of the two countries on the next stage will become a milestone for the long-term, sound and stable development of China-Japan relations, he added.

This year marks the 20th anniversary of China-Japan-ROK (Republic of Korea) cooperation. Wang noted that China and Japan should also enhance communication and coordination on major international and regional issues, which will not only promote the development of bilateral relations, but also inject more stability into world peace and stability.

Wang said after the meeting that China and Japan should jointly push forward regional cooperation, and sign the Regional Comprehensive Economic Partnership at an early date. China also hopes to speed up the negotiation on China-Japan-ROK free trade agreement, so as to facilitate Asia's economic integration.

Motegi said that the steady development of Japan-China relations is indispensable to regional peace and prosperity, and is of great positive significance in dealing with the current international situation full of turbulence. Japan is looking forward to Chinese President Xi's state visit next spring.

Japan is ready to work with China to promote economic and technological cooperation with an open mind, creating a fair and equitable business environment for companies of the two countries, he said.

Enhancing ties in all areas

The two sides also reached consensus in the fields such as culture, tourism, education, sports, media, film and television, local, youth and women, including designating the year of 2020 as the "China-Japan Cultural and Sports Exchange Promotion Year"; resuming and expanding two-way study tours; expanding personnel exchanges in a balanced way to exceed 15 million at an early date; promoting cooperation in cultural industries; and supporting each other in making the 2020 Tokyo Olympic Games and 2022 Beijing Winter Olympics a success.