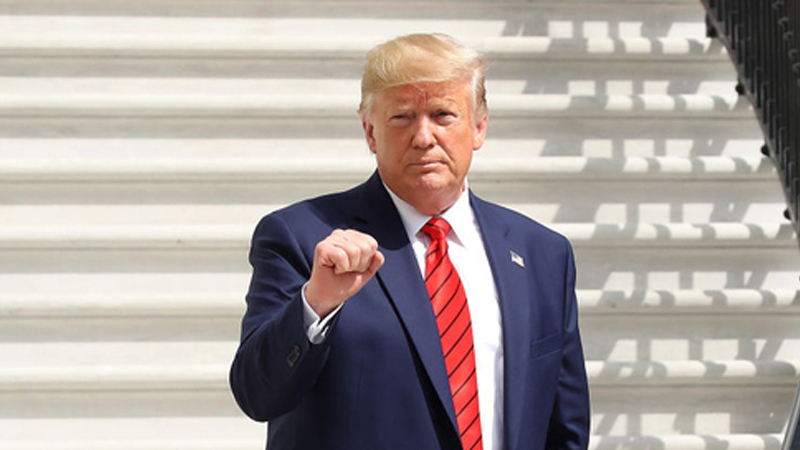 WASHINGTON - House Democrats on Tuesday took steps forward in their impeachment inquiry of President Donald Trump, with the judiciary panel scheduling its first hearing and the budget panel releasing a report alleging the White House broke the law by withholding money from Ukraine.

The moves show how the impeachment process is quickly advancing beyond the hearings held by the House intelligence committee this month to the proceedings that could lead to a formal vote on impeachment.

The House Judiciary Committee hearing on Dec. 4 is a crucial step in this process, as that panel has the power to draft the impeachment articles against Trump.

House Democrats have launched an impeachment inquiry into Trump, alleging that he withheld security funding for Ukraine and a White House meeting until that nation's new leader, Volodymyr Zelensky, agreed to launch investigations into Trump's political opponents.

A series of current and former government officials have testified that they were alarmed about the White House's decision to withhold the money, with some saying they were fearful Trump was trying to pressure the Ukrainian government for his own political gain. Trump has denied wrongdoing and decried the investigation.

In announcing the Dec. 4 hearing, House Judiciary Committee Chairman Jarrold Nadler, D-N.Y., sent a 13-page letter to Trump and asked whether he or his lawyer planned to attend and question witnesses.

"We expect to discuss the constitutional framework through which the House may analyze the evidence gathered in the present inquiry," Nadler wrote. "We will also discuss whether your alleged actions warrant the House's exercising its authority to adopt articles of impeachment."

Nadler asked Trump to notify the committee by Dec. 1 if he planned to participate in any way. Last week, Trump has said he would seriously consider responding to written questions as part of the inquiry, but he hasn't mentioned the idea since.

Trump on Tuesday gave mixed signals about whether the White House might participate with the process. In a string of Twitter posts, Trump wrote "I would actually like people to testify" but suggested he wasn't allowing his top current and former aides to testify because it would set a dangerous precedent for future presidents.

"It is a Democrat Scam that is going nowhere but, future Presidents should in no way be compromised," he wrote. "What has happened to me should never happen to another President!"

Democrats have tried to establish a timeline of events that show the Ukraine aid money was withheld around the same time Trump was ratcheting up pressure on Zelensky to investigate the Bidens. The House Budget Committee on Tuesday issued a report that it said was based on documents it obtained by the White House's Office of Management and Budget.

The House Budget Committee's report alleged that OMB engaged in a "pattern of abuse" of its authority and the law in holding up the security assistance to Ukraine. The Post has reported that a confidential White House review of the decision to block the aid turned up hundreds of documents that reveal extensive efforts to generate an after-the-fact justification for the decision. Officials also debated internally whether blocking the money was even legal.

In findings based on the documents turned over by OMB, the Democratic-led House Budget Committee cites unusual steps the agency took over the summer as it moved to hold up nearly $400 million in State Department and Pentagon funds for Ukraine that had already been approved by Congress.

The committee said that OMB put a political appointee in charge of signing off on spending, a step that was typically handled by career staff.

It also said OMB's actions limited agencies' ability to spend congressionally approved funds by the end of the fiscal year.

The latter move would be a violation of the Impoundment Control Act of 1974, which was passed in response to actions by President Richard Nixon and limits the ability of the executive branch to delay or cancel funds approved by Congress, the Budget Committee said.

In addition, the new report confirms a timeline of events related to the Ukraine aid decisions. It says, for example, that on July 18, OMB notified an interagency working group about a plan to withhold Ukraine funds.

One week later, on the morning of July 25, Trump and Zelensky spoke by phone, and Trump mentioned the possibility of Zelensky working with the U.S. government on an investigation into Biden and his son Hunter Biden, according to a transcript released by the White House. Later that day, at 6:44 p.m., according to the Budget Committee summary, an OMB career official signed a document formally withholding $250 million in Pentagon funds for Ukraine.

After this point, political appointees took over the process of approving these funds. The frozen aid was not released until Sept. 12, after House lawmakers were notified of a whistleblower report regarding the Trump-Zelensky call.

The committee's report also said that OMB released only a portion of the documents it sought in a detailed request to the agency two months ago from House Budget Chairman John Yarmuth, D-Ky., and House Appropriations Chairwoman Nita Lowey, D-N.Y.

The "apportionments" are the documents that OMB must sign off on in order for the U.S. Treasury to release or hold up funds.

OMB declined to provide an on-the-record response to the committee's findings.

The House of Representatives is controlled by Democrats, and they could impeach Trump with a majority vote. That action is equivalent to indicting the president for a crime. The process would then move to the Senate, which is controlled by Republicans, and they would then hold a trial on the House's charges. Removing the president from office would require the approval of two-thirds of senators, a threshold few think is likely to be met.

Video: President Trump took part in the Thanksgiving tradition on Nov. 26 of pardoning turkeys, joking that the birds had received subpoenas from the House Intelligence Committee.(The Washington Post)