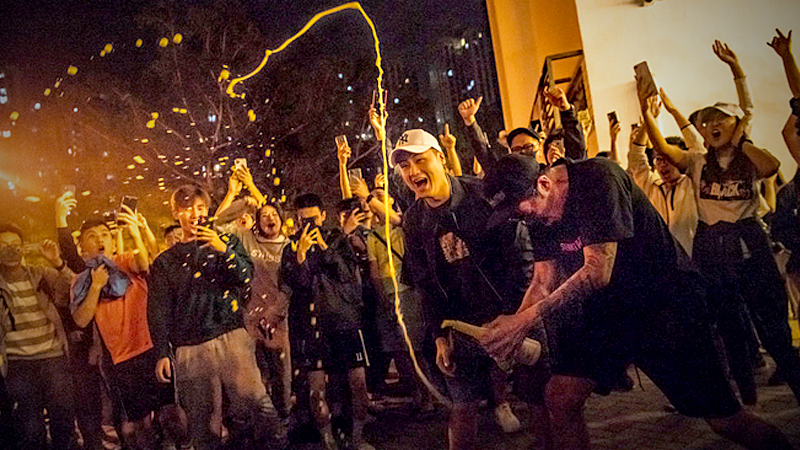 WASHINGTON - President Donald Trump on Wednesday signed legislation designed to support pro-democracy protesters in Hong Kong after previously suggesting he might veto the measure - despite its near-unanimous support in the House and Senate - to pave the way for a trade deal with China.

The legislation authorizes sanctions on Chinese and Hong Kong officials involved in human rights abuses and requires the State Department to perform an annual review of the special trade status that Washington grants Hong Kong.

China opposes the bill, but it has widespread support in Congress.

The House passed the Hong Kong Human Rights and Democracy Act by a vote of 417 to 1 on Nov. 20. The lone holdout was Rep. Thomas Massie, R-Ky. That vote came one day after the Senate had approved the measure unanimously.

Trump's decision to sign the bill puts an end to what could have been a politically uncomfortable veto showdown with members of his own party. While Trump has expressed ambivalence about how aggressively the United States should support the protesters while his administration is negotiating a trade agreement with Beijing, Republican lawmakers have been far more outspoken.

"I signed these bills out of respect for President Xi, China, and the people of Hong Kong," Trump said in a statement. "They are being enacted in the hope that Leaders and Representatives of China and Hong Kong will be able to amicably settle their differences leading to long term peace and prosperity for all."

Trump was asked Tuesday what message he had for Hong Kongers who voted for democracy parties in local elections over the weekend.

"Well, we're with them," Trump replied. He did not address the Hong Kong legislation.

"I have a very good relationship, as you know, with President Xi. We're in the final throes of a very important deal - I guess you could say, one of the most important deals in trade ever. It's going very well," Trump said. "But at the same time, we want to see it go well in Hong Kong, and I think it will. I think that President Xi can make that happen. And I know him, and I know he'd like to make it happen."

The legislation led to a diplomatic incident Monday, when China's Foreign Ministry summoned U.S. Ambassador Terry Branstad to lodge a protest over American "meddling" in China's internal affairs. China has warned that it would retaliate if Trump signed the bill.

Branstad in turn told Chinese officials that Washington remains concerned about Hong Kong and opposes intimidation tactics by the authorities.

Trump says he's asked Xi not to use the military to quell the protests.

In recent comments, Trump has suggested that he is being cautious in his approach to Hong Kong because of the sensitivity of trade talks. He has also alleged - without providing evidence - that he has personally saved the lives of thousands of people by warning Chinese leader Xi Jinping that more deaths in Hong Kong would scuttle the trade negotiations.