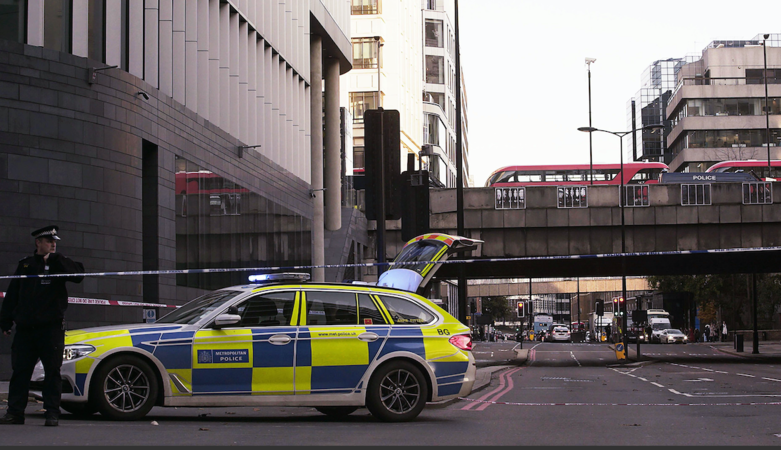 LONDON - Two people were fatally stabbed, and the knife-wielding assailant shot dead by police, in a chaotic midafternoon attack Friday on the busy London Bridge.

Police late Friday said the attacker was known to the authorities who had been previously convicted of terrorism charges.

Several victims were stabbed, two of them fatally, said Cressida Dick, commissioner of the Metropolitan Police, at a briefing at Scotland Yard late Friday.

"This is a very fast-moving, dynamic investigation," she said.

The attacker, identified by police as Usman Khan, 28, was released from prison last year.

"This individual was known to authorities, having been convicted in 2012 for terrorism offenses," Deputy Police Commissioner Neil Basu said in a statement late Friday, according to Reuters news agency. "He was released from prison in December 2018 on license and clearly, a key line of enquiry now is to establish how he came to carry out this attack."

Police said the incident started at Fishmongers' Hall, which stands beside the entrance to the London Bridge in the City of London. According to the Times of London, the attacker was a guest at a conference on prisoner rehabilitation that was being hosted at the hall by Cambridge University.

Dick said that police were working "full tilt to understand exactly what has happened and whether anyone else was involved." Detectives would also work "around the clock to identify those who lost their lives," she said.

Police said the assailant died at the scene. Witnesses described him as wearing a "suicide vest," but police said it was a "hoax explosive device."

Later Friday, Dutch police said that three people, all minors, had been wounded in a stabbing on a crowded shopping street in The Hague. Police said that they were searching for a suspect, whom they identified as a man in a jogging suit between 45 and 50 years old. They released no further information about the incident, including whether there was any connection to the attack in London.

"What's remarkable about the images we have seen is the breathtaking heroism of members of the public who literally ran towards danger, not knowing what confronted them," he said.

Khan noted that people would not have known at the time that the device worn by the attacker was fake. "They really are the best of us, another example of the bravery and heroism of ordinary Londoners," Khan said.

Police did not offer any details about the attacker's religion or nationality, or a possible motive.

Basu appealed to the public to supply any video or photographs they might have of the scene.

The bridge across the River Thames in central London is a major artery - and was the scene in June 2017 of a terrorist attack in which assailants identified as sympathizers of the Islamic State rammed pedestrians with a van, then sought out victims to stab. In that attack, the three assailants also wore fake explosive vests and were fatally shot after killing eight people and wounding 48.

A BBC reporter, John McManus, said Friday that he saw "a group of men involved in a fight on the bridge."

"There appeared to be a fight going on on the other side of the bridge, with several men attacking one man. … Police then arrived, and shots were fired," he said, according to the broadcaster.

President Donald Trump, who is headed to London next week for a meeting of NATO leaders, was briefed on the attack and was "monitoring the situation," the White House said in a statement. "The United States strongly condemns all horrific acts of violence on innocent people, and we pledge our full support to our ally, the United Kingdom," the statement said.

Amateur video showed crowds running away from London Bridge, as others leaped from their stopped automobiles into the roadway. Another clip showed police dragging a man away from another on the ground.

Amanda Hunter, an American living in London who was on a bus about to cross London Bridge, told the BBC that when she looked out the window, "I just saw these three police officers going over to a man. I believe he was carrying, maybe, it seemed like there was something in his hand. I'm not 100% sure, but then one of the police officers shot him."

From his offices at No. 10 Downing St., Prime Minister Boris Johnson vowed, "Anybody involved in this crime and these attacks will be hunted down and will be brought to justice." It was unclear whether Johnson was suggesting that the attacker had accomplices or assistance.

Johnson said Britain would "never be cowed or divided or intimidated by this sort of attack, and our British values will prevail."

Jeremy Corbyn, Labour Party leader and Johnson's challenger in upcoming December elections, said earlier: "Shocking reports from London Bridge. My thoughts are with those caught up in the incident."

Britain is in the middle of a general election, and voters go to the polls in two weeks' time. It's unclear whether or how the latest attack might affect the race. Both Johnson and Corbyn said they would briefly suspend campaigning.

During the last general election in 2017, the campaign was interrupted by two terrorist attacks, which both of the main political parties attempted to capitalize on. Labour attacked the Conservatives for cutting police numbers, and the Conservatives attacked Labour leadership for what they said were sympathies for anti-Western militants.

London Metropolitan Police said they responded to reports of a stabbing at London Bridge around 2 p.m. local time, noting that they believed "a number of people have been injured." They said that police officers had confronted the suspect five minutes after the attack started.

At that exact time, Amir Eden, 26, a lawyer, was heading to his home in Borough Market, a trendy shopping and dining area near London Bridge, when "I heard loud bangs, I didn't realize what it was at first, there was a lot of screaming and shouting. I had a feeling it was a major dangerous thing, I was saying in my head, 'Let it please, please, please not be the same as in June 2017.' "

It was not just fear he felt - it was a feeling of deja vu.

On June 3, 2017, he was walking along London Bridge when a white van smashed into railings on the bridge. "I was walking back home on my own, and I walked up and that's when the van smashed into the railings and it was all chaos," he said in an interview. He said that "the feeling" in the air today was "very much the same."

"We were always told that these things happen once, they don't happen again. I feel like, of all the incidents that have happened in the world, this is the only place that's happened twice."

Earlier this month, the government announced that the United Kingdom's terrorist threat level had been reduced from "severe," meaning that an attack is highly likely, to "substantial," a lower rating but one that still means an attack is likely. It was unclear whether the current threat level, the lowest since 2014, would be raised after Friday's attack.