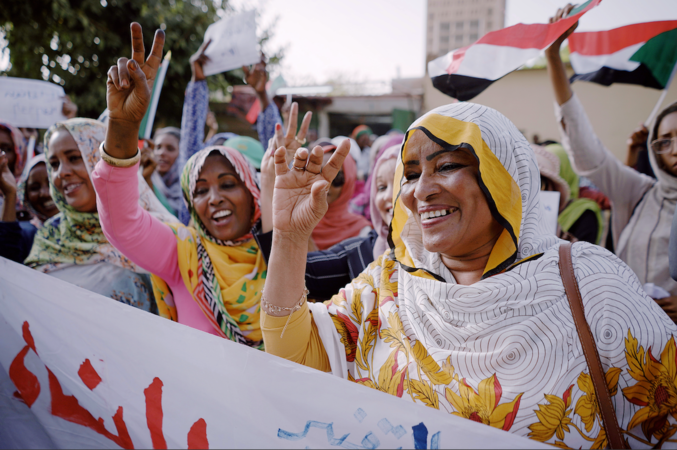 Protesters participate in a Women's March from the Ministry of Justice to a sit-in protest in front of the army's headquarters in Khartourm, Sudan, on April 20, 2019. MUST CREDIT: Photo for The Washington Post by Muhammad Salah

It's been nearly a year now since mass protests broke out in Sudan that in April culminated with the ouster of Omar al-Bashir, the African country's long-time dictator accused of war crimes.

Women were at the forefront of these protests - and they didn't stop pushing for change once Bashir resigned and the military followed by a transitional government took over. After 30 years of Bashir's repressively conservative rule based on an extreme interpretation of Islam, Sudanese women have more grievances than days in the year to demonstrate.

On Thursday night, the transitional government took a significant step in addressing Sudan's troubled past by repealing a public order law that had granted police far-reaching powers to arrest people for a litany of infractions, including women who were found dancing, wearing trousers, vending on the streets or mixing with men who weren't their relatives. Punishments included flogging, fines and, in rare cases, stoning and execution, according to the BBC.

Taken together, these laws were a tool to repress women's rights and freedoms of all kinds, from what they wore, where they went, who they associated with, what they studied and where they worked. The power of these laws also came from their vagueness and arbitrariness, which allowed police and judges to apply them in just about any way they wanted.

"The normal lay policeman could decide he doesn't like the dress a woman's wearing and immediately take her to court," where she could be flogged, said Sara Abouh, a former member of parliament and now a professor at Khartoum University. "The law doesn't respect women at all."

Sudan's transitional prime minister, Abdalla Hamdok, quickly praised the move on Twitter, saying he paid "tribute to the women and youth of my country who have endured the atrocities that resulted from the implementation of this law."

"This law is notorious for being used as a tool of exploitation, humiliation & violation of rights," he continued in another tweet. "Many have used this law for financial & psychological exploitation. Along the way, a lot of women and youth endured confiscation of their belongings and unforgettable harm."

The sentiment was shared by women's activists who had long campaigned for the law's repeal.

"These laws were used to designed to intentionally oppress women," Khartoum-based women's rights activist Yosra Faud told the Guardian. "Abolishing them means a step forward for the revolution in which masses of women have participated. It's a very victorious moment for all of us, and I'm hoping to see more from our transitional government."

Sudan's uprising began last December after Bashir imposed austerity measures that raised the price of basics like bread. But once the floodgates opened, people stood their ground and demanded that Bashir and his whole regime had to go.

Twenty-two-year-old Alaa Salah became an icon of the revolution, and the power of women in making it happen, after the scene of her poetically rallying a crowd in Khartoum went viral.

The economic grievances that sparked the protests also underscored the deep class, social and geographic divides that had grown under decades of dictatorship.

"The way the (public order) law was applied underlined the divisions and tensions within Sudanese society," James Copnall, a BBC reporter and Sudan analyst, wrote. "In recent years it was common to see rich Khartoum women wearing trousers in public - while those targeted by the morality police were often poorer women from the marginalized areas on the periphery of this vast country."

Despite the progress, other laws remain on the books that restrict what women can wear and allow for flogging, among other repressive criminal codes.

Amnesty International praised the law's appeal in a statement but also called on the transitional government to go further in amending other restrictive laws, such as those "governing so-called 'morality,' including consensual sex, dress code, and other matters on the conduct of individuals in private spaces."

Abouh called on Sudan's leaders to change the country's family status laws, which, based on an extreme interpretation of religious law, limit women's rights in marriage, divorce and child custody.

As The Washington Post's Max Bearak reported in April, "Bashir's interpretation of Islamic law was more lenient than, say, that of Saudi Arabia, where women have only recently been allowed to drive on their own. But Sudanese society is deeply conservative, and in addition to discriminatory laws, powerful societal roles such as judge or minister are entirely closed off to women."

"The authorities hope that dismantling the NCP will help stop the old regime from undermining the transitional government," Copall of the BBC wrote. The government can also now seize the NCP's assets.

Military leaders took over after they pushed out Bashir in April, but the people continued to go to the streets demanding a civilian government be instated. In June, Sudanese security forces brutally cracked down on pro-democracy protests in what Human Rights Watch said this month may have amounted to a crime against humanity. Despite the prominent voice of women in the protests, they remained largely sidelined in meetings and discussions between protest leaders and the military.

In August, after many ups and downs, those military officers and civilian leaders agreed to a power-sharing deal that formed a transitional "sovereign council" to govern until elections are held in 2022.

The agreement also instated Hamdok, a former United Nations economist who represented a coalition of civilian and protest groups, to lead the transitional administration as prime minister.

"The three-plus-year period between now and the planned elections presents a chance for a new civilian leadership to continue chipping away at three decades of military-backed rule, or for the opposite: a further entrenchment of military rule, with perhaps less pressure from relentless street protests," Bearak reported after the agreement was announced. "Many international observers remain skeptical of the prospects for a civilian-led democratic government in Sudan."

Abouh is proud of how far Sudan has come - but unflinching in her criticism of how women are being shut out.

"I am not happy with the women's participation now," she said.

Women hold just two out of the 15 seats on the Supreme Council, she said. As half the population, they should also be half the ministers: Instead, there are only four female ministers out of 18 positions.

The problem, she said, is that men continue to nominate other men for powerful positions, while sidelining women's rights.

The repeal of the public order law was "the minimum that could be done for the girls and the ladies of Sudan," she said.