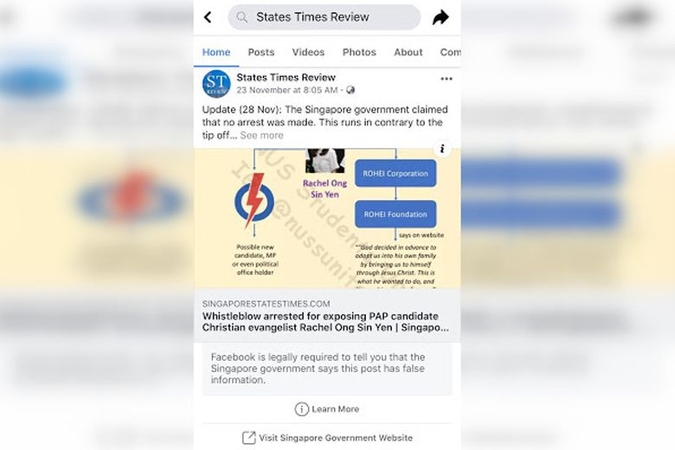 SINGAPORE - Facebook has complied with a directive under Singapore's fake news law to publish a correction notice on a post which the Government says contains false information.

On Saturday (Nov 30), Facebook put up a notice at the bottom of a post in the States Times Review page.

It read: "Facebook is legally required to tell you that the Singapore government says this post has false information."

The States Times Review website, which the Ministry of Home Affairs (MHA) says spreads "outright fabrications", is blocked in Singapore.

On Nov 23, the website posted on its Facebook page remarks concerning an earlier post on the Nussu-NUS Students United page, which parodies the National University of Singapore Students' Union or Nussu.

The States Times Review's Facebook post said one person involved in the matter was arrested and another was being investigated by the police.

The Ministry of Home Affairs said these claims were false and baseless. No one has been arrested or charged in relation to the spoof student group's post, the ministry said.

Under Protection from Online Falsehoods and Manipulation Act (Pofma), the States Times Review was required to carry a correction notice on its Facebook post stating that its article contains falsehoods.

Mr Alex Tan Zhi Xiang, the editor of States Times Review who is based in Australia, has refused to comply with the correction direction by the Pofma Office.

In a statement, a spokesman for Facebook said the company applied a label to the post as required by Singapore law. "As it is early days of the law coming into effect, we hope the Singapore Government's assurances that it will not impact free expression will lead to a measured and transparent approach to implementation," it said.