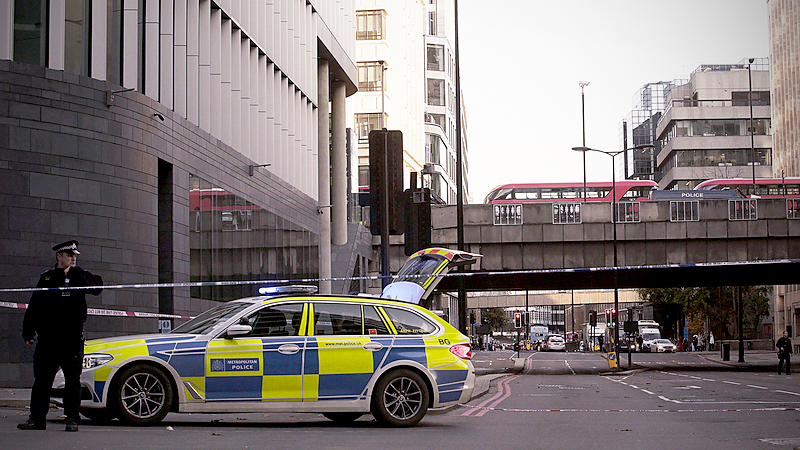 LONDON - With a general election less than two weeks away, politicians in Britain tore into each other Sunday over the early release of a convicted Islamist terrorist who stabbed two people to death in a rampage on London Bridge.

As tributes poured out for the victims of the Friday attack, leaders of the Conservative and Labour parties traded blame on the Sunday talk shows and speeches on the hustings over which side was responsible for the laws that allowed the homegrown, al-Qaida-inspired Usman Khan to be released after serving less than half his 16-year sentence for plotting to blow up the London Stock Exchange.

Khan, who was released on parole 11 months ago with an electronic tracking device on his ankle, began his attack Friday afternoon as he was entering a conference intended to rehabilitate violent offenders and terrorists for a successful return to society. He stabbed at least five people before he was tackled by members of the public and shot dead by police. The queen honored the bystanders who intervened as heroes.

Police on Sunday named the second victim of Khan's attack: Saskia Jones, 23, a volunteer with the Cambridge University program that hosted the conference in London. Police had earlier named Jack Merritt, 25, who worked for the program. Three other victims were in the hospital recovering from their wounds.

Prime Minister Boris Johnson said, appearing on a BBC political affairs show, said "the reason this killer was out on the streets was because of automatic early release, which was brought in by a lefty government." He was referring to the government of former Labour prime minister Gordon Brown, which ended in 2010.

Host Andrew Marr repeatedly challenged Johnson, reminding his guest - and viewers - that Johnson's Conservative party has been in power for nearly 10 years.

Johnson refused to concede any responsibility. Whatever the Tories failed to do in the past, he said, if he wins a majority in Dec. 12 elections, his government will fix it.

"I think it is ridiculous, I think it is repulsive, that individuals as dangerous as this man should be allowed out after serving only eight years and that's why we are going to change the law," Johnson vowed.

In a speech in York on Sunday, Corbyn took aim at the cuts to police forces since the Conservatives came into power - a deficit of some 20,000 officers compared to years before.

"A failure to recruit has left huge staffing shortfalls and staff supervising more cases than ever expected, posing again a serious risk to our security," Corbyn said. "You can't keep people safe on the cheap."

Into this febrile mix, President Donald Trump is scheduled to arrive for a meeting of NATO leaders on Tuesday and Wednesday. Trump in the past has found it irresistible to wade into British electoral politics, and all sides expect him to do so again.

As Trump's ally Johnson was swatting back blame, the Ministry of Justice revealed that 74 people convicted of terror offenses are now living, under supervision, in British society.

The Sunday Times reported that Khan "had been granted permission by his parole officer to travel to London even though he was one of 3,000 extremists" on the MI5 "watch list." The MI5 is Britain's domestic intelligence service.

Ian Acheson, a former top counterterrorism official, wrote that he had warned Conservative officials for years that they were treating released terrorists with "jaw-dropping naivete."

Corbyn, who has long spoken out against military action, said Britain's foreign interventions have fueled conflict and brought terror to Britain.

He told supporters he had warned against the 2003 invasion of Iraq, and "we are still living with the consequences today."

"The war on terror has manifestly failed," Corbyn said. "Britain's repeated military interventions in North Africa and the wider Middle East, including Afghanistan, have exacerbated rather than resolved the problems."

Johnson has often accused Corbyn of siding with terror groups, such as Hamas and Hezbollah.

Opinion surveys of voting intent for the coming election have consistently shown Johnson's Conservatives with a solid lead and clear path to majority government. But pollsters warn the electorate is still making up its mind - divided not only over parties and ideologies but Brexit - and they note that former Prime Minister Theresa May squandered her 20-point lead in days in the 2017 election.

Jo Swinson, the leader of the Liberal Democrats, accused Johnson of "politicizing" the terrorist attack, of turning it into a "distasteful" election issue.

Johnson said he would seek much tougher sentences for convicted terrorists.

"The suggestion that there's some immediate law change, that you can do this with some tough rhetoric and, as he has done, link majority government to success in tackling terror, I just think it leaves a nasty taste in the mouth," Swinson told the BBC.

Khan killed two of the very people who were tasked with helping him and other prisoners return to society as peaceful, productive citizens. Jones and Merritt were Cambridge graduates.

"What should have been a joyous opportunity to celebrate the achievements of this unique and socially transformative programme, hosted by our Institute of Criminology, was instead disrupted by an unspeakable criminal act," university Vice Chancellor Stephen Toope said in a statement.

David Merritt, Jack's father, described his son as a "beautiful spirit" who "always took the side of the underdog."

He said his son would "not wish his death to be used as the pretext for more draconian sentences or for detaining people unnecessarily."

Shami Chakrabarti, a top member of the Labour Party and an attorney, told the BBC, "I'm not prepared to say that any political party could have prevented what happened on Friday."