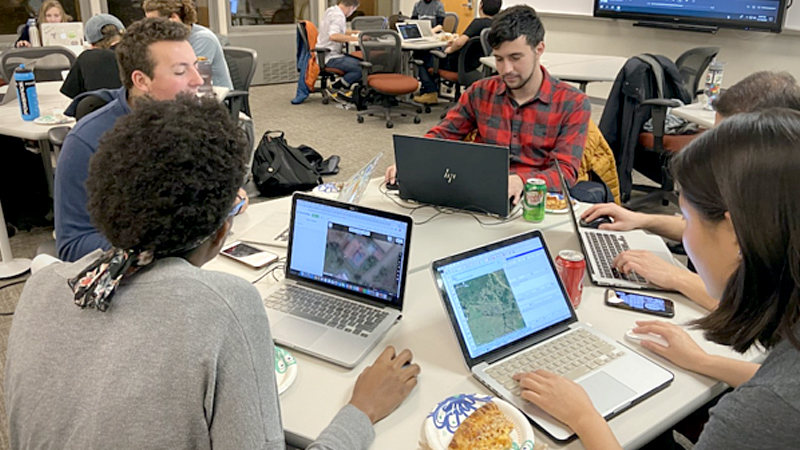 Students at George Washington University use OpenStreetMap to create a digital map of a rural area in the Philippines on Nov. 15, 2019. MUST CREDIT: Washington Post photo by Lauren Lumpkin

WASHINGTON - With Queen's "Bohemian Rhapsody" humming in the background, about two dozen students at George Washington University traced skinny lines and square-shape landmarks on a satellite image of a rural chunk of Mindanao, the second-largest island in the Philippines.

They are in the early stages of piecing together a map of the region where half of the country's food is grown but where most people live in poverty.

The students carefully scanned the photos to scope out buildings and roads tucked between thick trees. The task is painstaking but necessary to create an up-to-date map. This corner of the Philippines - like large swaths of the planet - does not have any recent digital maps.

To complete the project, the students used a Wikipedia-meets-Google-Maps platform called OpenStreetMap. One million people worldwide are using it to create a free, editable map of the world.

And humanitarian organizations, such as the U.S. Agency for International Development, rely on the information to plan infrastructure projects, deliver aid and respond to natural disasters.

"That helps us, as an agency, understand where we should be putting our resources," said Carrie Stokes, chief geographer and GeoCenter director at USAID. "Once you're on a map, now your community can no longer be ignored."

GWU has two student organizations that work on mapping projects every month. The Humanitarian Mapping Society is a school-affiliated group. YouthMappers, founded in 2015, is a network of 175 colleges and universities in 45 countries.

Computer mouse in hand, Juan Pablo Cortés, 21, president of the Humanitarian Mapping Society, outlined a building on a satellite image. People on the ground in the Philippines will eventually identify the building - be it a hospital, school or home.

"[Mapping] really helps a lot of people at once, and that's what people really like about it," Cortés said.

Since Cortés started attending mapping events - called mapathons - three years ago, he said he has helped build maps for 25 countries. Most of those projects started with partnerships students forged with relief organizations, including a collaboration with the Pan American Development Foundation that resulted in students creating maps for a flood relief effort in Belize.

Richard Hinton, an adjunct professor who manages the university's Spatial Analysis Laboratory, called his students "armchair mappers." In the past month, they mapped more than 4,200 buildings and 88 highways in Peru, Belize, Kenya, Colombia, Guatemala and the Philippines.

"We're supporting missions that are going to be taking place very soon," Hinton said. "We're tracing the buildings and roads that we see and naming them the best we can. So when first-responders get there, they know where to go."

The number of mappers on college campuses is growing. When YouthMappers was founded by USAID's GeoCenter and geography experts at George Washington, Texas Tech and West Virginia universities, the organization had a few dozen members. Now, there are 5,000.

Graduate students Lidia Awad and Sidney Larsen started a chapter at American University this semester and held their first mapathon in November.

"The cool thing about mapping is that, with YouthMappers, we give people the skills to know how to map. Then they can do it on their own, at home watching TV," Larsen said.

In a world where natural disasters are becoming more frequent and hundreds of millions of people live in extreme poverty, students say mapping makes them feel like they're making a difference.

"It's empowering," Awad said. "It's not just us helping other people, it's people helping themselves."

Grace Donovan, a junior majoring in environmental studies and geography at GWU, started mapping as a way to log volunteer hours for her service fraternity.

"It's working together with people all over," she said. "It's not just us sitting in the United States and mapping."

Donovan is a YouthMappers member and "validator." As a more experienced mapper, she reviews projects to weed out mistakes or nefarious mappers who might purposely botch the data.

The 20-year-old toiled with the other students who munched on pizza and guzzled cans of Coke. Energy can wane after spending hours staring at satellite pictures.

"Do you think these are buildings?" one student asked another.

Esmy Vergel, 21, studies international affairs and worked on the mapping project for class credit. She hovered her mouse over a square-ish shape on her laptop screen and traced it until it glowed red.

"It can be difficult. You can't tell if it's a building, or a rock, or trash," she said.

OpenStreetMap launched in 2004, and people started using it for humanitarian purposes after the earthquake that devastated Haiti in 2010. A 30-second video shows how quickly volunteers edited maps of the country's capital, Port-au-Prince.

"We needed a new generation of mapping data that would be in digital form that would be accessible to us via the Internet so we can collect it, use it and share it," Stokes said, adding that nearly half of YouthMappers are women. "It's easy to target students who have a curiosity, who are not afraid of technology."

Stokes said she saw YouthMappers' impact about three years ago when USAID partnered with college students to map malaria-plagued communities in Mozambique. Relief workers needed accurate maps of the African country to know how many people were affected and where to spray insecticides. It used to be difficult to determine how much of the chemical they needed.

"We were able to provide a source of mapping data for the spray campaign they'd never had before," Stokes said.

Bands of other mappers are spread throughout the world. Many aren't professional cartographers, but they volunteer by contributing to the growing repository of geographic data on OpenStreetMap. Anyone with an account can do it.

Many people are used to having maps in their pockets, courtesy of their cellphone. Google and Apple are constantly updating their maps. But they haven't been everywhere, Cortés said. Some areas in his home country, Guatemala, can't be found on maps.

Young mappers want to fill in those gaps.

"That's the beauty of this open platform," Stokes said.

Tags:
maps for the Philippines