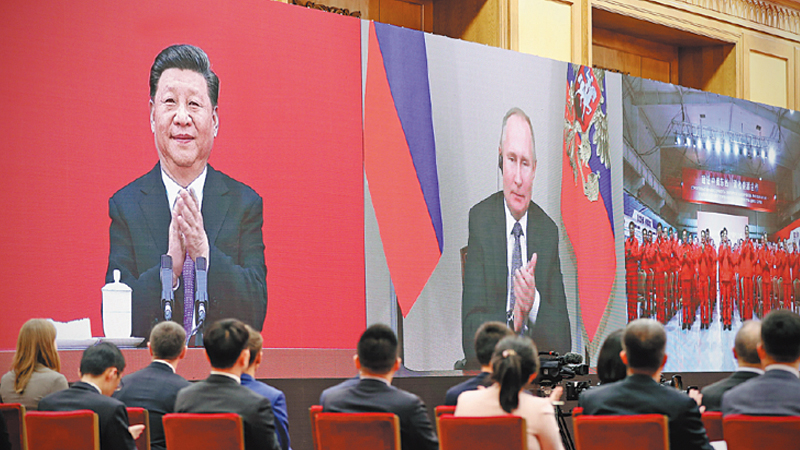 By AN BAIJIE and REN QI
China Daily/Asia News Network

President Xi Jinping and his Russian counterpart Vladimir Putin witnessed via video link on Monday the opening ceremony of the China-Russia east-route natural gas pipeline, a landmark project that will transport natural gas from eastern Siberia through Northeast China to Shanghai.

The two presidents, Xi in Beijing and Putin in Sochi, Russia, greeted each other, and Xi expressed gratitude toward the workers building the pipeline.

Xi mentioned that he and Putin witnessed the signing of the document on the pipeline project in 2014. The construction workers overcame difficulties in freezing weather in the past five years to complete the project, which shows the fine technologies of workers in major countries and the fruitful outcomes of China-Russia cooperation, Xi said.

The project's completion is not only an outcome but also a new starting point for cooperation, Xi said, adding that the two nations should work together to build a safe, green, developing and friendly pipeline, make all efforts to ensure its safe construction and operation and promote the sustainable economic and social development of regions along the route.

Noting that this year marks the 70th anniversary of China-Russia diplomatic relations, Xi said the two countries should make further efforts to build more projects like the pipeline to bring more benefits to the people of both sides.

Putin said that the opening of the pipeline has great significance at a time when the two countries are celebrating the 70th anniversary of diplomatic relations.

In the next 30 years, Russia will supply 1 trillion cubic meters of natural gas to China, which will be helpful in implementing the two presidents' consensus of advancing Russia-China trade volume to $200 billion in 2024, Putin said.

Russia would like to make joint efforts with China to ensure the smooth implementation of the flagship project, he added.

Under a 30-year agreement between Russian company Gazprom and China National Petroleum Corp signed in May 2014, the China-Russia east-route pipeline project is expected to pump some 38 billion cubic meters of natural gas from Russia to China annually.

That is equal to about 13.6 percent of China's gas consumption in 2018 of 280.3 billion cubic meters, according to the National Development and Reform Commission.

The pipeline stretches 5,111 kilometers in China and 3,000 km in Russia. Its Chinese section covers six provinces, one autonomous region and two municipalities from Heilongjiang province to Shanghai.

Yana Leksyutina, a professor at the Russian Academy of Sciences, said China has been the largest trade partner for Russia since 2010, and Sino-Russian trade and economic ties have maintained good momentum.

Their cooperation is mainly focused on energy, Leksyutina said, saying some Russian energy megaprojects are being implemented, or are to be launched with Chinese investments, including the Yamal LNG and Arctic LNG 2 liquefied natural gas projects.

She said the first ever Russian-Chinese gas pipeline has tremendous meaning for both countries, as the volume of Russian energy exports to China is expected to grow rapidly. Russia has high hopes for extending cooperation to other fields, such as agriculture, Arctic development, cross-border e-commerce and currency settlements.