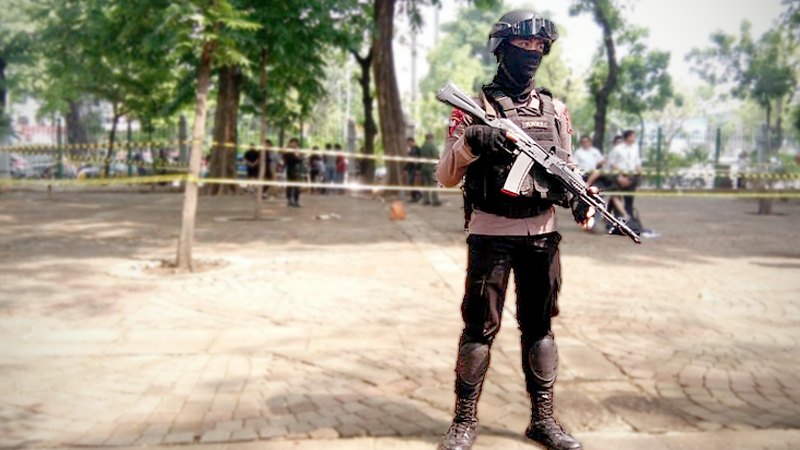 A police officer guards the scene of the minor explosion that occurred on the morning of Dec. 3 at National Monument Park in Central Jakarta. Police have confirmed that the device was a smoke grenade, stressing that it was an "ordinary" accident. (JP/Vela Andapita)

Police have confirmed that a smoke grenade was the cause of the minor explosion that occurred on Tuesday morning at National Monument Park in Central Jakarta.

Two Indonesian Military (TNI) personnel were injured in the incident.

“Our team at the crime scene discovered that the explosion was allegedly caused by a smoke grenade,” Jakarta Police chief Insp. Gen. Gatot Eddy Pramono told a press briefing.

He said the device exploded at around 7:15 a.m. along the northern end of the monument park across the Home Ministry on Jl. Medan Merdeka Utara.

The ministry is located around 400 meters from the State Palace.

Teams from the police's Gegana bomb squad and the Indonesia Automatic Fingerprint Identification System (Inafis) were still investigating the site of the explosion to determine how the smoke grenade came to be at the park.

Gatot said that members of the public could continue with their daily activities in the area, which the police had already cleared during an initial sweep.

“This is just a smoke grenade, don’t exaggerate this. The grenade could belong to our [security] personnel, [who] left it there,” Gatot said, stressing that it was an “ordinary" accident.

The two TNI personnel injured in the blast were identified as Sgt. Maj. Fajar and Chief Pvt. Gunawan, who have been taken to the Gatot Subroto Central Army Hospital for treatment.

“Fajar sustained injuries to his left hand, because he was holding the smoke grenade when it went off. Meanwhile, Gunawan’s injuries were lighter, [and] he was able to call for help,” said Jayakarta Military District Commander Maj. Gen. Eko Margiyono.

Eko added that the two victims were at morning exercises with other TNI personnel when the incident occurred, adding that some units held regular exercises at the park on Tuesday mornings.

“This [incident] is nothing out of the ordinary,” he said. (kuk)