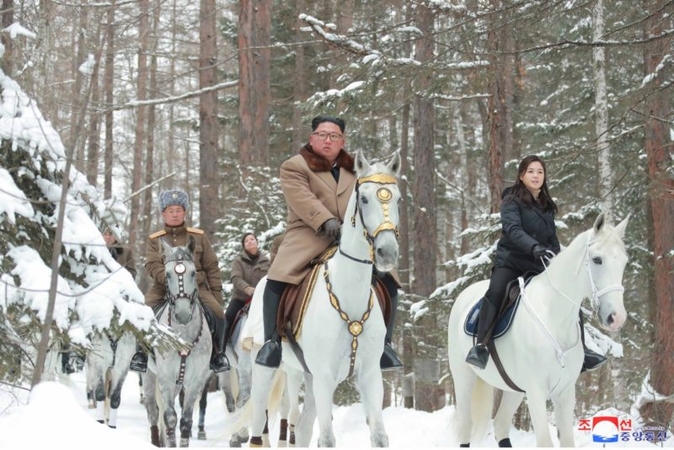 North Korea will hold a plenary meeting around the end of December to decide on “crucial issues,” its state-run news agency said Wednesday.

On the same day, the Korean Central News Agency reported that North Korean leader Kim Jong-un rode up Paektusan on a white horse accompanied by military commanders, raising speculation that the communist regime may take more provocative military actions as the year-end deadline it set for denuclearization talks with the US quickly approaches.

North Korea’s Workers’ Party of Korea announced Tuesday that the 5th Plenary Meeting of the 7th Central Committee of the WPK would convene around the end of December, Korea Central News Agency reported, “in order to discuss and decide on crucial issues in line with the needs of the development of the Korean revolution and the changed situation at home and abroad.”

The last plenary meeting was held in April, where the North Korean leader urged the US to come up with a new proposal for denuclearization negotiations and set a year-end deadline. Kim also warned that he would take a “new way” if Washington fails to offer an acceptable proposal.

The announcement of the meeting comes as the North Korean leader was reported to have ridden up Paektusan on a white horse.

Accompanied by commanding officers, Kim recollected the “bloody history of guerrillas who recorded dignity on the first page of the history of the Korean revolution by shedding their blood in the vast plain of Mt. Paektu,” the KCNA said.

Choe Ryong-hae, the president of the Presidium of the Supreme People’s Assembly and Pyongyang’s second in command, and Gen. Park Jong-chon, the chief of the Korean People’s Army, were among Kim’s retinue, according to the KCNA.

Kim’s visit to Paektusan marks the second time this year. On Oct. 16, the North Korean leader was photographed riding a white horse on the mountain, where he reportedly stressed the importance of self-reliance against outside forces, including the US. The mountain holds symbolic importance for the regime, which claims it as the birthplace of the late former leader Kim Jong-il, the father of Kim Jong-un, as part of the mythology surrounding the Kim regime.

The Unification Ministry said it is not unusual for Pyongyang to convene the meeting.

“And Pyongyang has been seen holding the meeting twice a year, or even four times in a year in the past. So I don’t think convening the meeting is unusual.”

As the meeting is held just before the New Year’s speech by Kim Jong-un, Lee said the ministry will closely watch the situation.

As the year-end deadline approaches, both Washington and Pyongyang are seen to ramp up pressure against each other. US President Donald Trump hinted that the US can use military force against the North as necessary, though he reiterated that his personal relationship with the North Korean leader remains good.

“Now we have the most powerful military we’ve ever had and we’re by far the most powerful country in the world,” Trump told reporters in London, where he is attending a meeting of North Atlantic Treaty Organization leaders.

Earlier on the same day, the North’s Vice Foreign Minister Ri Thae-song issued a statement warning the US against using their denuclearization negotiations to influence domestic politics. He also said it is entirely up to the US to select what “Christmas gift” it will get.

Kim Dong-yub, a professor at Kyungnam University’s North Korean Studies School, said North Korea may possibly break away from the negotiations with the US and choose a “new way.”

“The North Korean party’s plenary meeting is a very important event for the regime. In the New Year’s speech, I believe Pyongyang will reconfirm its status as a nuclear power and highlight reinforcing its self-defense capabilities,” Kim said.

“Domestically, Kim will announce a new strategy encouraging self-rehabilitation for economic development. Externally, North Korea will break away from negotiating with the US and seek for a new way of cooperating with China and Russia,” Kim said.