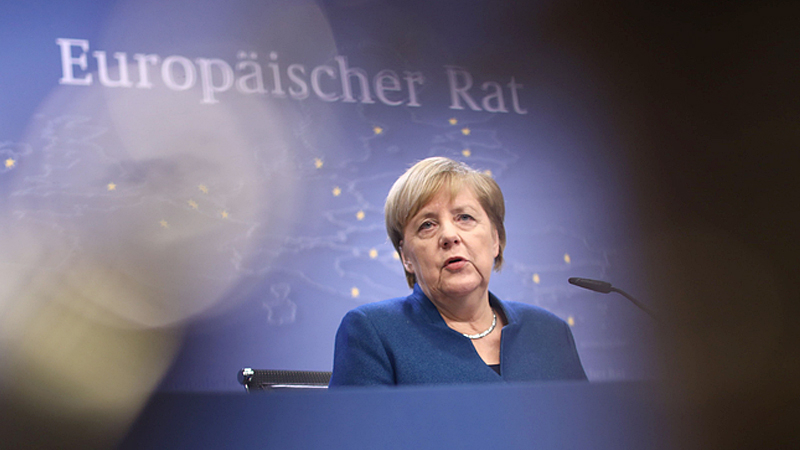 BERLIN - German Chancellor Angela Merkel made a symbolic official visit to the former Nazi concentration camp of Auschwitz on Friday, for the first time in her 14 years as premier.

After walking through the infamous wrought-iron gates topped with the German words "Arbeit Macht Frei" (Work sets you free), Merkel listened to the account of a camp survivor before giving a speech in which she warned about growing anti-Semitism in Europe and "dangerous historical revisionism."

Nazi Germany executed more than 1.1 million people at Auschwitz-Birkenau during the Holocaust, the vast majority of whom were Jews. The gas chambers at the site near Krakow, Poland, were key in the Nazi campaign to wipe out Europe's Jewish population. More than 6 million Jews were killed.

Merkel's trip, the first by a German chancellor in almost a quarter-century, comes just two months after a deadly shooting at a synagogue in Halle, and as Germany once again grapples with rising anti-Semitism. In the attack on Yom Kippur, the holiest day on the Jewish calendar, a 27-year-old far-right gunman fatally shot two people near the synagogue after failing to break inside, police said.

Josef Schuster, president of the Central Council of Jews in Germany, described the trip as "extremely positive." Given Merkel's "very clear attitude" toward the crimes of the Nazis, it should not be a cause for criticism that she has not made an official visit to the site until now, he told Die Zeit newspaper.

Merkel has visited other concentration camps, including Dachau and Buchenwald in Germany. She is the third German chancellor to visit Auschwitz. Helmut Schmidt visited in 1977, and Helmut Kohl in 1989 and 1995.

She was invited to attend the ceremony for the 10th anniversary of the Auschwitz-Birkenau Foundation, which oversees the site. The German government announced that it would donate 60 million euros, or about $67 million, to the foundation.

Larger commemorations are planned for the 75th anniversary of the liberation of Auschwitz next month, but Merkel had been keen to ensure that she was able to visit before her term ends, according to German press reports. New leadership in her party's coalition partner has added uncertainty to the future of her ruling alliance in recent weeks.

Merkel is attended alongside Polish Prime Minister Mateusz Morawiecki and paused for a minute's silence at the "Black Wall" where Nazi SS officers carried out executions by firing squad.