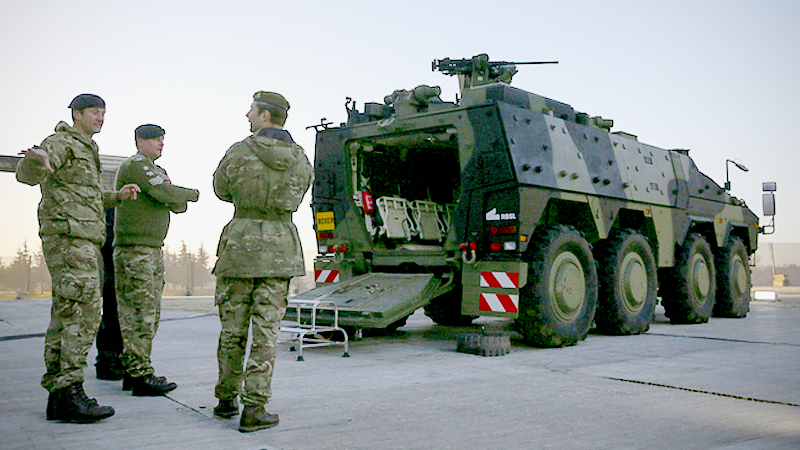 Soldiers stand guard near an armored vehicle on the perimeter of the NATO leaders' meeting near Watford, England, on Dec. 4, 2019. MUST CREDIT: Bloomberg photo by Hollie Adams.

NATO's 70th turned out to be less like a birthday party and more a Thanksgiving dinner for a large dysfunctional family: Not all of them got on, a few snide remarks were made, but in the end everyone seemed to accept they're stuck with each other.

After a tumultuous build-up in which French President Emmanuel Macron had warned that the alliance might not reach its 75th anniversary intact, and Turkey threatened to hold a key planning document hostage, even President Donald Trump came to NATO's defense.

"We had a very successful meeting," said an evidently relieved Chancellor Angela Merkel of Germany, citing the unity she had seen among the alliance's 29 leaders. "So I'm very pleased."

The brief final declaration made few concessions to Macron's demands for upending NATO's priorities and focus, or his call for re-engagement with Russia. The alliance was open to dialogue with Moscow, according to the communique, but only "when Russia's actions make that possible." Erdogan's threat to block the planning document didn't materialize.

There were multiple opportunities for the two-day meeting to go awry, starting with Trump's Twitter account. But absorbed by impeachment proceedings back home, the president mainly celebrated his own success in helping to make NATO stronger by driving up European defense budgets. He also joined in rebuffing Macron's pre-summit description of the alliance as 'brain dead.'

Wednesday's round table discussion passed without the brawl some had feared over NATO's future and purpose, 30 years after the end of the Cold War that it was created to counter. The declaration set out a focus on new technological and cyber threats, while for the first time mentioning China as a challenge and extending the alliance's remit into space.

"In like a lion, out like a lamb," Alexander Vershbow, a former NATO deputy secretary general and U.S. Ambassador to Russia, said of the two-day meeting.Macron's concerns were really about the reliability of U.S. leadership, following Trump's October decision to greenlight Turkey's military incursion into Syria without consulting allies, according to Vershow.

Speaking on a call from the Atlantic Council think tank he added that these concerns were shared by others, too, but that they concluded NATO unity "was too important to put at risk."

At times leaders did clash in public, including during a testy exchange between Trump and Macron. The U.S. president also called Justin Trudeau "two-faced," when reporters drew his attention to a moment when the Canadian prime minister was overheard making fun of Trump, for holding lengthy impromptu press conferences.

Perhaps the most dangerous moment passed already on Tuesday afternoon, when the U.K.'s Prime Minister Boris Johnson and his French and German counterparts met in Downing Street with the main target of Macron's attacks, President Recep Tayyip Erdogan of Turkey. The four leaders had what all sides said was a good and civilized, if brief, discussion on Syria.

That meeting appeared to follow the same pattern as the wider NATO event. Despite substantial differences ranging from Turkey's human rights record to whether to treat Syria's Kurdish People's Protection Units as terrorists (the U.S., France and U.K. treat them as allies against Islamic State), the pressure to stay engaged was stronger.

Policymakers in Ankara have tried to shape a public message that Turkey remains indispensable as the frontier between its Western neighbors and the Middle East's extremists, as well as the refugees who flee them. At times, Erdogan backed that message up with threats to send the more than 3.6 million refugees Turkey already hosts to the European Union.

That's a threat to which Merkel is particularly sensitive, after politics in Germany was upset by the arrival of about 1 million refugees in 2015-2016. Though not in the room on Tuesday, Europe's East European leaders have pushed hard to avoid triggering a breakdown in relations with Ankara. Bulgaria led the charge to water down EU sanctions on arms sales to Turkey, after its troops crossed the Syrian border in October.

For its part, Turkey needs the EU's financial aid and markets, as well as a political buffer to relieve Erdogan's increasingly close, but also one-sided, relationship with Russia's President Vladimir Putin. According to Turkish and German officials familiar with Tuesday's meeting, the EU-3 agreed to discuss Erdogan's request for help in turning the buffer zone it controls in north eastern Syria into a safe haven for returning refugees - so long as the United Nations controls resettlement.

If NATO survived the Wednesday's meeting unscathed, the underlying tensions are unlikely to vanish. Macron's focus on building up the EU as a security force of its own, rebalancing with Russia to survive a more serious rivalry between the U.S. and China will not go away, said Thomas Gomart, director of the French Institute for International Relations, a Paris-based think tank.

"Macron really believes that if Europe stays on its current path, it will disappear as a geopolitical entity," its markets left at the mercy of leaders in Washington and Beijing, Gomart said in an interview at NATO Engages, a conference held on the margins of the leaders meeting. "He won't drop it."

On Wednesday, Trump canceled a planned press post-summit conference to fly home, saying he'd already held enough and had nothing left to say. It wasn't clear how long his new-found love for NATO allies would last. At a leaders' lunch on Wednesday, he let it be known he wasn't done with getting alliance members to shoulder more of the alliance's defense burden."If they don't, we'll get them on trade. One way or the other, they're paying, folks," Trump said. "That I can tell you."