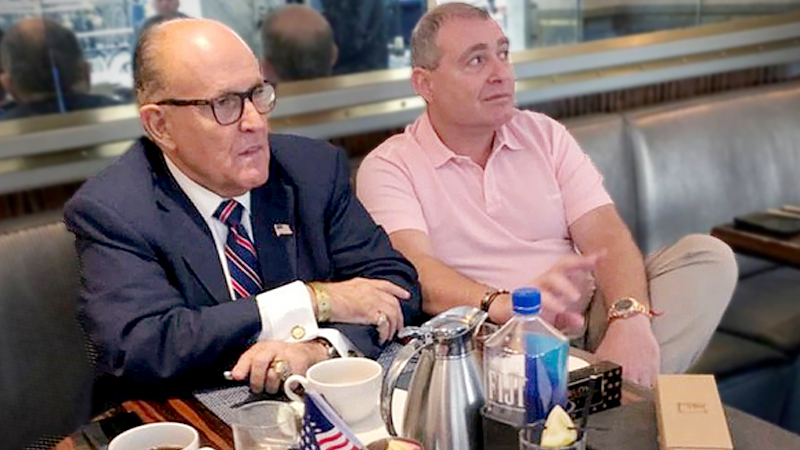 WASHINGTON - Phone logs subpoenaed from Verizon and AT&T put a spotlight on the powerful tools at lawmakers' disposal as they seek to investigate President Donald Trump in the impeachment inquiry.

The records were some of the strongest circumstantial evidence included in the House Intelligence Committee's impeachment report this week, revealing extensive contact between Trump's personal attorney, Rudy Giuliani, and the Trump administration during critical points of the Ukraine saga. They also exposed calls between a Giuliani associate who has been indicted in New York, Lev Parnas, and the ranking Republican on the House Intelligence Committee, Rep. Devin Nunes of California.

Republican lawmakers are blasting Democrats' decision to publish the records of Nunes' calls, as well as call records from John Solomon, a conservative columnist formerly at The Hill. Nunes said in a Fox News interview the inclusion of the phone records in the impeachment report is an infraction of his "civil rights" and promised to explore "whatever legal remedies I have."

"They have now set a precedent where Adam Schiff can go get any phone number he has to AT&T and AT&T is going to comply," Nunes said.

But Democrats deny legally asking the telecom companies for any phone records belonging to members of Congress or journalists. The report doesn't say whose records the committee subpoenaed, but the records suggest they targeted the calls of Giuliani and Parnas.

"The Republican Minority of the three committees has had access to these subpoenaed records and the subpoenas themselves, and knows full well that neither Mr. Nunes nor Mr. Solomon were subpoenaed, nor were their call records," a committee official said in a statement.

AT&T said that it ensures the requests it complies with are valid.

"Like all companies, we are required by law to provide information to government and law enforcement agencies," AT&T said in a statement. "In all cases, we ensure that requests for assistance are valid and that we act in compliance with the law."

Verizon did not respond to a request for comment.

The entire saga has set off perhaps the most heated debate about phone metadata in Washington since former government contractor Edward Snowden's 2013 revelations of the intelligence community's broad collection of such records. The intelligence community and law enforcement's use of phone records has been heavily scrutinized in the intervening years. But the impeachment inquiry report highlighted that congressional investigators target companies with subpoenas for communications records, too.

"It's not all that unusual for Congress to obtain and publish communications (texts, emails, phone records, etc.) under their investigatory and subpoena powers," said Casey Burgat, a resident senior fellow at the think tank R Street Institute, in an email.

It's rarer for one member of Congress to target another with subpoenas, but not entirely unheard of, experts say. Daniel Schuman, the policy director at the progressive organization Demand Progress, said such a subpoena might be issued during an ethics investigation into lawmakers for alleged behavior like harassment. The committee might start by obtaining records from the individuals involved, but could ultimately turn to phone companies for the full record.

"They will often ask the providers for this information," he told me.

Republicans are also turning up the pressure on the companies for complying with the subpoenas in the impeachment inquiry. Nunes said on Fox News that AT&T should have fought the request from the Democrats.

"AT&T should have at least went to court to see if what they were going to do was the right thing," Nunes said.

Jim Baker, a former FBI general counsel who previously worked for Verizon, said the companies "have a rigorous legal process for assessing these requests."

"They don't just hand over this stuff willy nilly," Baker, who now serves as the R Street Institute director of national security and cybersecurity, told me.

Paul, the senator who emerged as a key advocate for privacy during the debate sparked by Snowden, said Schiff's ability to obtain the records "may not have been illegal" but "it certainly was wrong." He's calling on the House to formally censure Schiff for his conduct. In the same op-ed, Paul urged an overhaul of privacy laws to ensure that members of Congress aren't subpoenaing records from companies about people's communications without their knowledge.

"Part of the problem lies with Congress writing its own rules for subpoenas and investigations, without any thought of due process," Paul wrote.