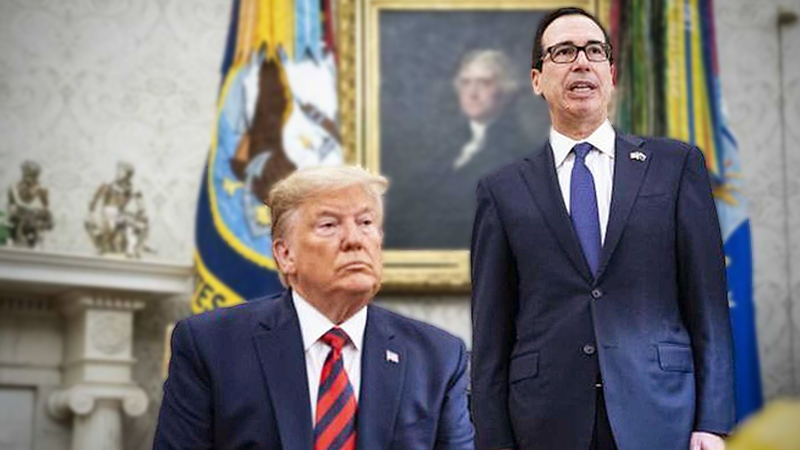 President Donald Trump's pro-Wall Street record will leave him little room on the campaign trail next year to reprise the anti-industry pose he struck in 2016.

That was in fresh evidence as Treasury Secretary Steven Mnuchin, the onetime Goldman Sachs executive, appeared on Capitol Hill to defend the Trump administration's deregulation of the financial services industry and criticize Democratic proposals to tax and scrutinize it.

Mnuchin spent most of his time before the House Financial Services Committee in the weeds of financial oversight. But the hearing also offered a preview of what Democratic strategists believe will be a potent line of attack to press against Trump on the campaign trail.

And at least one former Trump official agrees the president is vulnerable on this front. "There's some truth to the idea that it would be smart for a Democrat nominee to focus on the closeness between the Trump White House and Goldman Sachs," the former White House official tells me, speaking on the condition of anonymity to offer a candid assessment. "That would be some inherently good messaging for Democrats to use."

Mnuchin in his appearance offered a full-throated critique of a tax on financial transactions embraced by some Democratic presidential candidates, including Sens. Bernie Sanders, I-Vt., and Elizabeth Warren, D-Mass., and entrepreneur Andrew Yang. And the Treasury secretary faced sharp questions from Democrats about the administration's moves to shrink the Financial Stability Oversight Council, the post-crisis board charged with coordinating the federal government's regulation of the financial system.

Mnuchin said the Treasury Department is working to study the impact of the potential financial transactions tax. "I am very concerned that that would destroy our capital markets, and the cost to American holders of mutual funds would bear the majority of the cost," Mnuchin said.

But it likely will remain a popular concept on the campaign trail: A version introduced by congressional Democrats would raise an estimated $777 billion over a decade, a considerable sum for the party's White House hopefuls looking to fund pricey social welfare expansions while reining in the industry.

To be sure, not all Democratic presidential candidates are embracing a financial transactions tax. But even former vice president Joe Biden, arguably the field's moderate pacesetter, is pushing a tax plan that would mean a significantly higher burden for big banks. His plan, released this week, would bump the corporate rate up from 21% to 28 percent, effectively halving the windfall the industry reaped from Trump's tax cuts.

Democratic pollster Celinda Lake says the Trump cuts, whose second anniversary arrives this month, present a ripe target for Democrats to make the case the president has betrayed the populist pitch he made in 2016. She said focus groups she's conducted with disaffected Trump voters reveal they are "really, really mad" about the corporate windfall the cuts yielded, "and a remarkable number of people know about companies like Amazon that aren't paying any taxes." (To that end, Biden is proposing a 15 % minimum corporate tax.)

Lake says going after the failed promise of the tax cuts could become "a very powerful component" of a broader case against the president's coziness with corporate interests. Another focus group of Trump voters - conducted in Michigan's swing Macomb County by Democracy Corps, a project by Democratic strategists James Carville and Stanley Greenberg - struck on the framing back in March 2017. From that report:

"When his cabinet is described as full of campaign donors, Goldman Sachs bankers (bailed out by the taxpayers) and people who use undocumented workers in their homes, they question whether this is the Donald Trump they voted for."

But the former White House official argued not all Democratic candidates are on the same footing when it comes to challenging Trump's Wall Street advocacy. Trump, he said, can lean into his trade wars - anathema to C-suites and Wall Street - to argue his populist credentials are intact if he's running against a more moderate, trade-friendly Democrat. "Both sides are going to attempt versions of the same argument against the other," he said. But "Sanders will have a better time making the argument against Trump than a Biden or [South Bend, Indiana, Mayor Pete] Buttigieg."