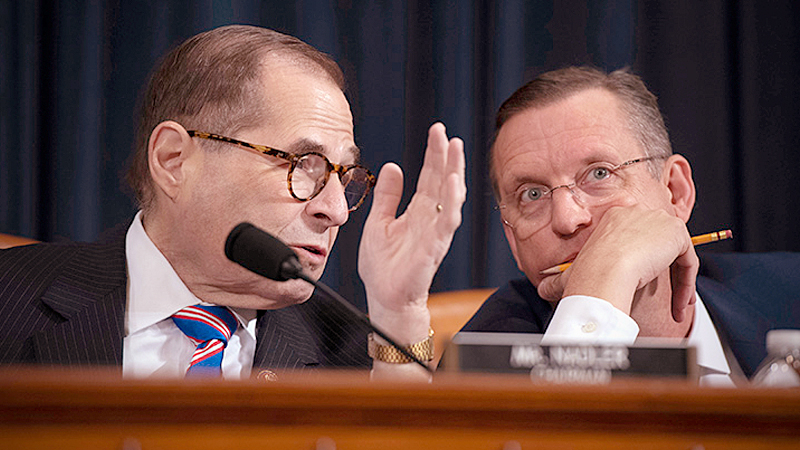 WASHINGTON - President Donald Trump faces a 5 p.m. deadline Friday to announce whether he intends to have a lawyer participate in the remaining impeachment proceedings before the House Judiciary Committee, as Democrats accelerate their attempt to remove him from office.

The White House declined to participate this week in the committee's first hearing, during which four law professors testified about whether Trump's conduct toward Ukraine amounts to an impeachable offense.

House Judiciary Committee Chairman Jerrold Nadler, D-N.Y., gave Trump an ultimatum about participating in a letter addressed to him a week ago.

"In particular, please provide the Committee with notice of whether your counsel intends to participate, specifying which of the privileges your counsel seeks to exercise, no later than 5:00 pm on December 6, 2019," Nadler wrote. "I look forward to your prompt response."

Democrats have said Trump's decision on whether to participate could affect the timing of a full House vote on impeachment. If he does participate, the proceedings could be extended.

House Speaker Nancy Pelosi, D-Calif., directed committee chairmen Thursday to begin the process of drafting articles of impeachment against Trump, with many Democrats anticipating that a full House vote could come before Christmas.

"His actions are in defiance of the vision of our founders and the oath of office that he takes to preserve, protect and defend the Constitution of the United States," Pelosi said Thursday. She also praised her ranks' "somber approach to actions, which I wish the president had not made necessary."

At the heart of the Democrats' case is the allegation that Trump tried to leverage a White House meeting and military aid, sought by Ukraine in the face of Russian military aggression, to pressure President Volodymyr Zelensky to launch an investigation of former vice president Joe Biden and his son Hunter Biden, as well as a probe of an unfounded theory that Kyiv conspired with Democrats to interfere in the 2016 presidential election.

He added that he found it "somewhat interesting" that Pelosi had announced plans to move forward with articles of impeachment before hearing if a Trump lawyer would participate in the Judiciary Committee proceedings.

"Anything they have that is exculpatory, this is their moment," she told reporters at the Capitol. "But they have a consciousness of guilt, and that's why they may not show up. We'll see. Maybe they will. They have till 5 o'clock today."

The Judiciary Committee has another hearing scheduled on Monday, during which lawyers for the House Intelligence Committee are slated to present findings from a 300-page report that concluded Trump put his personal political interest above the national interest.

In tweets Thursday, Trump urged the House to impeach him quickly, if Democrats intend to do so, saying he was eager to participate in a trial in the Republican-led Senate.

Trump returned to Twitter Friday morning to retweet a half-dozen tweets from allies taking issue with the impeachment process.

Among them was one from his campaign manager, Brad Parscale, who wrote: "The Democrats are right about one thing - someone did abuse their power. But it's not @RealDonaldTrump. It's THEM."

House Majority Whip James Clyburn, D-S.C., said during a television appearance Friday that Democrats would be free to vote as they choose on articles of impeachment without pressure from party leadership.

"I think it would be a bit unseemly for us to go out whipping up a vote on something like this," Clyburn said during a CNN interview. "This is too serious. This is too much about preserving this great republic, and I think we ought to leave it up to each member to decide how he or she would like to vote."

Clyburn said lawmakers should consider "their own constituents and what they think is in the best interests of their love for country." He acknowledged that Democrats could lose some votes but would not predict how many.

"I have not counted," Clyburn said. "I do know we'll have some voting against impeachment."

More than 500 legal scholars have signed an open letter asserting that Trump committed "impeachable conduct" and that lawmakers would be acting well within their rights if they ultimately voted to remove him from office.

The signers are law professors and other academics from universities across the country, including Harvard, Yale, Columbia, the University of California at Berkeley, the University of Michigan and many others. The open letter was published online Friday by the nonprofit advocacy group Protect Democracy.

"There is overwhelming evidence that President Trump betrayed his oath of office by seeking to use presidential power to pressure a foreign government to help him distort an American election, for his personal and political benefit, at the direct expense of national security interests as determined by Congress," the group of professors wrote. "His conduct is precisely the type of threat to our democracy that the Founders feared when they included the remedy of impeachment in the Constitution."

Also Friday, a new report by a watchdog group says that 50 members of Congress have visited a Trump property since the beginning of the House impeachment inquiry.

"While Congress is charged with providing unbiased checks and balances on the president, including President Trump's conflicts of interest related to his businesses, many members have chosen to forgo these responsibilities while enjoying the political benefits that visiting and spending money at Trump properties provides," says the report by Citizens for Responsibility and Ethics in Washington.

"That's especially problematic now, as members of Congress are tasked with considering how to perform their constitutional duty as the impeachment process moves forward," the report said.

According to the group, more than 100 members of Congress have visited a Trump property since he took office. Of those, five are Republican members of the House Judiciary Committee, the panel tasked with drafting articles of impeachment.

They include Reps. Matt Gaetz, R-Fla., Tom McClintock, R-Calif., Andy Biggs, R-Ariz., Louie Gohmert, R-Texas, and Jim Jordan, R-Ohio. The campaign committees of Biggs, Gohmert and Jordan have also spent money at a Trump property, according to the group.

Meanwhile,three Republican Senate committee chairmen announced Friday that they are seeking records and transcribed interviews from two people who, they claim, could bolster an advanced by Trump that "elements of the Ukrainian government were actively working to undermine" his prospects against Democrat Hillary Clinton.

"Contrary to the popular narrative in the 'main stream media' that Ukrainian involvement in the 2016 election has been debunked, or 'no evidence exists,' there are many unanswered questions that have festered for years," Homeland Security Chairman Ron Johnson, R-Wis., said in a statement.

In a statement, Graham said that the hacking of Democratic National Committee servers in advance of the 2016 election was done "by the Russians and no one else." But, he added, "[w]hether there's a connection between Democratic operatives and Ukrainian officials during the 2016 election has yet to be determined. It will only be found by looking. We intend to look."