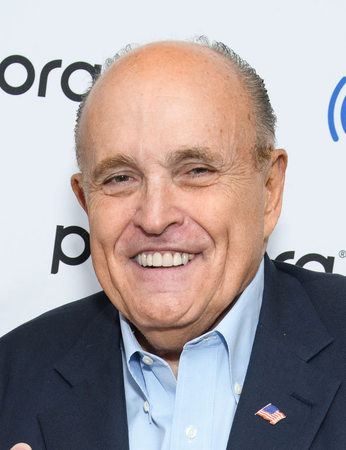 WASHINGTON - President Donald Trump said his personal attorney Rudy Giuliani planned to issue a report to the Justice Department and Congress detailing what he'd learned from his investigations in Ukraine.

Trump claimed not to know what Giuliani was doing in Ukraine this week or what he found out while there, but he asserted that Giuliani says "he has a lot of good information."

"He's going to make a report, I think to the attorney general and to Congress," Trump told reporters Saturday outside the White House. "He says he has a lot of good information. I have not spoken to him about that information yet."

"I hear he has found plenty," Trump added.

During Giuliani's trip to Ukraine, the country at the center of the impeachment inquiry against Trump, the former New York mayor met with Ukrainians who have peddled unsubstantiated allegations of misdeeds by former vice president Joe Biden in Ukraine and claims that Ukraine, not Russia, interfered in the 2016 election.

While in Kyiv, Giuliani tweeted that he had "compelling evidence of criminal conduct" by Biden. He also suggested that until a corruption probe in Ukraine is resolved, "it will be a major obstacle to the U.S. assisting Ukraine with its anti-corruption reforms."

The crux of the impeachment probe is whether Trump withheld military assistance to Ukraine to pressure the government to launch a public investigation into a possible political foe. Career State Department officials have testified that Giuliani was operating a shadow foreign policy in Ukraine to dig up dirt on Biden, his son Hunter and the Ukrainian natural gas company Burisma, where Hunter Biden held a seat on the board.

The House Judiciary Committee is beginning to draft articles of impeachment against Trump and hoping to hold a vote before Christmas. On Saturday, the Democrats released a report detailing the constitutional justifications for impeaching Trump.

Trump told reporters Saturday that "nothing came out of the conversation" he had on July 25 with Ukrainian President Volodymyr Zelensky, during which he asked the foreign leader to look into the Bidens and again dismissed the Democrats' probe.

"Nothing came out of the conversation, except for the relationship with Ukraine," Trump said. "And the people see that it's just a continuation of this three-year witch hunt."