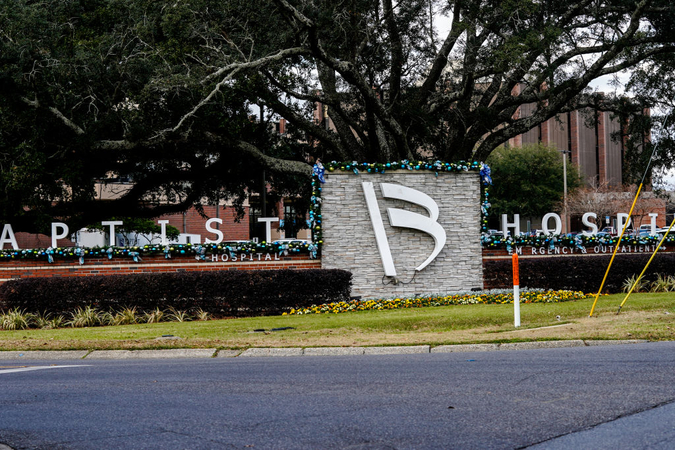 Shooting On Naval Air Station Pensacola Leaves Multiple Dead And Injured PENSACOLA, FLORIDA - DECEMBER 06: A general view of the atmosphere at Baptist Hospital following a shooting at the Naval Air Station on December 06, 2019 in Pensacola, Florida. The second shooting on a U.S. Naval Base in a week has left three dead plus the suspect and seven people wounded. (Photo by Josh Brasted/Getty Images)

PENSACOLA, Fla. - FBI officials broadened their probe Saturday into the deadly shooting rampage at a Navy flight school here amid reports that several of the gunman's Saudi compatriots took video footage as the attack was underway.

The shooting at Naval Air Station Pensacola was labeled an act of terrorism by congressional officials, even as investigators continued to explore why a Saudi military student blasted his way through a classroom building early Friday, killing three people and wounding eight. The gunman, identified as Ahmed Mohammed al-Shamrani, was shot dead by a sheriff's deputy.

Law enforcement officials combed through the shooter's belongings and social media accounts on Saturday while questioning six other Saudi nationals, at least some of them fellow students in the same Navy flight training program. Three of the Saudis were said to have taken cellphone video at the scene, according to a U.S. official familiar with investigation. The official spoke on the condition of anonymity to discuss an ongoing probe.

The FBI declined to offer a motive for the attack, and it was unclear Saturday whether any of the Saudis questioned knew of the gunman's plans. Officials said they were investigating claims, first reported by the Associated Press, that Shamrani showed videos of previous mass shootings at a dinner party he hosted in the days before the attack.

There also was no official confirmation of a possible link between Shamrani and a Twitter account that surfaced Friday bearing the same name and containing a note in English criticizing U.S. support for Israel and accusing Washington of "funding crimes against Muslims."

The user of the account, which Twitter suspended Friday, did not express an allegiance to any particular extremist group. Law enforcement officials were investigating the possibility that Shamrani was self-radicalized.

Several members of Congress said the attack was terrorism and demanded stricter screening of the hundreds of foreign nationals who travel to the United States every year for military training.

"This was a planned terrorist attack, and the shooter wasn't alone," Rep. Matt Gaetz, R-Fla., whose district includes Pensacola, said on Twitter. Gaetz said he received a call of condolence from the Saudi ambassador to the United States, Reema bint Bandar al-Saud, and had "expressed in the strongest possible terms that we expect to conduct our investigation w full cooperation and no interference from the Kingdom."

The incident - with its eerie echoes of Sept. 11, 2001, when a mostly Saudi team of al-Qaida operatives received flight training in the United States and then crashed planes into the World Trade Center and Pentagon - threatened to further erode U.S. relations with Saudi Arabia, which have been under exceptional strain since the killing of Saudi national and Washington Post columnist Jamal Khashoggi in Istanbul last year. But White House and Defense Department officials stressed Saturday that they did not think the attack would harm ties between Riyadh and Washington. In remarks to reporters on Saturday, President Donald Trump described Saudi leaders as "devastated" by the killings in Florida.

The FBI has taken the lead in the case as authorities look into Shamrani's past and possible motives. The bureau's Jacksonville branch said the inquiry remains "active and still very fluid." A formal determination of whether to classify the attack as terrorism was being reviewed, said a U.S. official, who spoke on the condition of anonymity to discuss an ongoing investigation.

An initial survey found no apparent connection to a foreign terrorist group, though the official cautioned that the investigation is in its early stages. There also were no firm indications so far of a conspiracy, the official said, adding that the shooter may have been self-radicalized.

As the probe progressed, family members and local officials provided initial accounts of the dead and wounded, as well as details of how the gunman was confronted and killed.

"Joshua Kaleb Watson saved countless lives today with his own," his brother wrote. "After being shot multiple times he made it outside and told the first response team where the shooter was and those details were invaluable. He died a hero and we are beyond proud."

Among the wounded were two of the sheriff's deputies who charged into the classroom building within minutes of when the shooting began. One was released from a hospital, while another is recovering after undergoing surgery, Escambia County Sheriff's Office spokesman Major Andrew Hobbs said Saturday. Deputies arrived on the scene within three to four minutes, fatally shooting the gunman, he said.

Details of the conditions of the six other wounded were not available.

Investigators spent part of Saturday trying to piece together Shamrani's movements in the United States. Pentagon officials said that his training with the U.S. military began in August 2017 and that he was to finish in August 2020. According to a U.S. official familiar with the case, Shamrani attended language school at Lackland Air Force Base in San Antonio for six months and was assigned to the training program in Pensacola only in the past week, although he had been staying in the area for some time. His coursework at the Navy school was to include basic aviation and initial aviation training, officials said.

Three of the Saudis questioned by FBI officials had flown to the United States with Shamrani and then went to different training locations in Louisiana and Oklahoma, the officials said.

The FBI declined to answer questions about how the gunman obtained his weapon, described as a handgun. "Non-immigrant aliens" admitted to the United States for a specific period of time are generally banned from transporting or possessing firearms, but there are exceptions, including for law enforcement from "a friendly foreign government entering the United States on official law enforcement business," according to the Bureau of Alcohol, Tobacco, Firearms and Explosives.

Gun use is tightly restricted on military bases, and officials said only members of "security forces" are able to bring a weapon on to the Pensacola installation. It was not immediately clear how the shooter was able to take a gun into the classroom.

The Defense Department operates a robust effort to train foreign military officers, with more than 5,000 such foreign students from 153 countries in the United States, officials said. Those foreign nationals are vetted in a process that includes searching databases for evidence of drug trafficking, support for terrorist activity, corruption and criminal conduct, officials said.

Several members of Congress called Saturday for canceling or suspending training programs until better screening procedures could be adopted. But current and former defense and counterterrorism officials described the programs as vital for U.S. national security, saying they promote good relations between U.S. and foreign militaries and are crucial in fostering seamless deployments with U.S. troops fighting and training overseas. Violent incidents among participants are extremely rare, the officials said.

"We've been having individuals from Arab militaries studying and working here for decades - not just from Saudi Arabia but from across the Arab world," said Nicholas Rasmussen, a former intelligence official who directed the National Counterterrorism Center. "When something like this happens you have to go back and look at whatever vetting procedures you have and check carefully to make sure that you are doing everything you can to get a full picture of those entering the United States for this purpose. But it doesn't invalidate the utility of the actual programs."

Trump's response to the shooting has been conspicuously restrained in comparison with his reactions to other violence by people from predominantly Muslim countries. After speaking by phone with Saudi King Salman, he tweeted that the monarch and his people are "greatly angered by the barbaric actions of the shooter, and that this person in no way shape or form represents the feelings of the Saudi people who love the American people."

"I just spoke with Foreign Minister Al-Saud of Saudi Arabia who expressed his condolences and sadness at the loss of life in the horrific attack in Pensacola, Florida yesterday," Pompeo said in a Twitter posting.