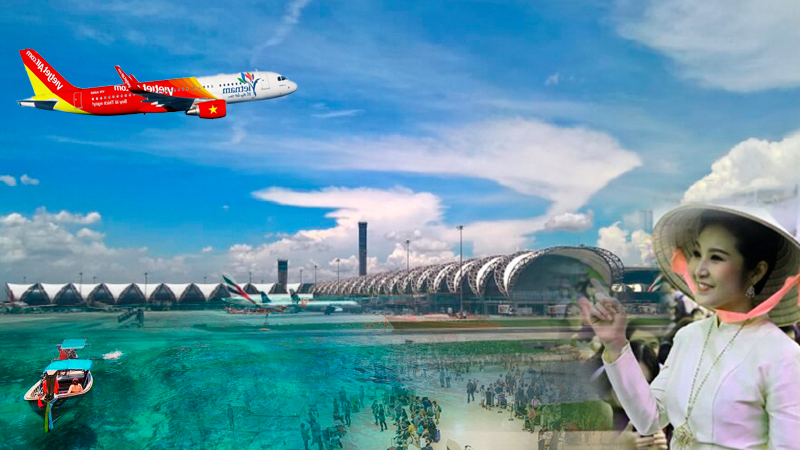 The Tourism Authority of Thailand (TAT) is looking to fast growth in tourist arrivals from Vietnam following the expansion of direct flights between the two countries by several carriers.

Napasorn Kakai, director of TAT office in Ho Chi Minh city, said today (December 9) that it will benefit the first-time visitor market, especially from secondary cities in Vietnam, such as Hai Phong, Nha Trang, Da Lat, and Can Tho.

After Thai Vietjet, Thai AirAsia, Bangkok Airways, and Vietnam Airline have all launched new direct routes and added flights from Vietnam to Thailand’s tourist destinations, such as Bangkok, Chiang Mai, and Phuket.

The total number of direct flights has now risen to 301 per week, from 288 last year.

Moreover, Thai Vietjet is set to inaugurate a new service from Ho Chi Minh city to U-Tapao on December 23 with one flight a day.

“Vietnam has a population of 97 million people, there is still room for growth in first time tourists,” said Napasorn.

“According to the marketing base of Vietnamese tourists traveling abroad in 2018, 1.07 million people from almost 9 million chose Thailand as the first tourist destination for two consecutive years since 2017.”

“We expected continuous growth of 2-3 per cent a year in the number of Vietnamese tourist, while growth of the country's tourism market is forecast to reach 8 per cent next year.”

The main competitor of Thailand in the Vietnam market is South Korea with the country's airlines having launched new routes and added flights to more than 403 flights a week. In addition, South Korea has been successful in promoting its products and tourist attractions such as K-Pop and cosmetic surgery services.

In the first ten months of this year, Vietnamese tourist arrivals in South Korea rose to about 500,000.

“Competition with other countries is not a major factor because the Vietnamese economy has been growing well,” said Napasorn.

“Besides South Korea, Japan and Indonesia are also strong competitors of Thailand in the Vietnamese market, but TAT is still confident of Thailand's products and tourist attractions, especially the retail shops in Pratunam, Ratchaprasong and Ratchadaphisek areas”.