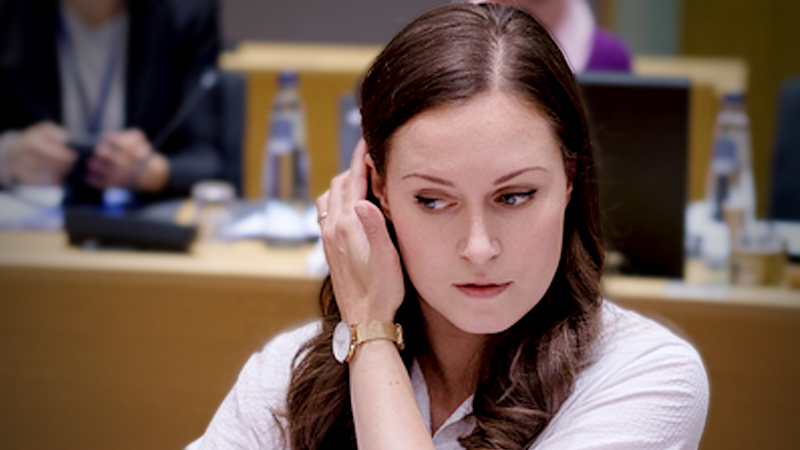 File Photo: EU Transport Ministers Meeting BRUSSELS, BELGIUM - SEPTEMBER 20, 2019: Finish Minister of Transport and Communications, President of the Council Sanna Mirella Marin is waiting prior an EU transport Ministers meeting in the Europa, the EU Council headquarter on September 20, 2019 in Brussels, Belgium. The Council will hold an extensive policy debate on transport aspects of the EU's long-term strategic vision for reducing greenhouse gas emissions and meeting its climate commitments under the Paris Agreement. The discussion will be organised in three rounds: land transport (road,rail and inland navigation), aviation and shipping. (Photo by Thierry Monasse/Getty Images)

At just 34 years old, Sanna Marin is about to make history as she becomes the world's youngest serving prime minister.

The Finnish Social Democrat won her party's backing over the weekend, and is set to be confirmed on Tuesday. Marin will need to govern a five-party coalition that just ousted her predecessor, Antti Rinne, after he stumbled on a number of key issues. In the end, he was toppled in a dispute centering on pay at the state postal company.

Marin will lead a government at a younger age even than New Zealand's Premier Jacinda Ardern, who was 37 at the time of her appointment. North Korea's Kim Jong Un was under 30 years old when he became Supreme Leader in 2011. In Austria, former Chancellor Sebastian Kurz was 31 when he assumed office in 2017. Going further back in history, William Pitt the Younger stands out, becoming Britain's prime minister at just 24 in 1783.

Finland's new leader -- the third woman to hold the position -- will take over after the ruling coalition on Sunday agreed to keep working together to advance its existing policy program. But she faces a tough start after Rinne's ouster just six months into his first term left rifts across the government.

Marin had a chance to demonstrate her leadership skills earlier this year, when she stood in for Rinne while he was recovering from a serious illness.

The peculiarities of Finland's parliamentary system led to about 60 Social Democrats being in a position to pick the country's next premier. Snap elections are a distant possibility and not automatically triggered by the government's resignation. What's more, parties have considerable leeway in selecting their own ministers.

The Center Party on Monday announced a partial reshuffle, with its leader Katri Kulmuni becoming finance minister in a swap with Mika Lintila, who takes on the economy minister's role.

Marin says her first task will be to rebuild confidence across party lines within her coalition.

"There's a lot of work to be done to rebuild trust," she told reporters after the party vote. "We are still committed to a common policy program, and that's the glue that unifies us as the government."

Meanwhile, the cabinet is losing support in the polls. Almost a quarter of Finns would now vote for the opposition anti-immigration Finns Party, making it the country's most popular. The Social Democrats and its main government ally the Center Party were each backed by just over 10% of the population in the latest survey by YLE.

The Social Democrats are particularly hampered by the country's aging population, with pensioners making up a huge chunk of its backing. With public finances under pressure as the number of working-age people drops, the party's traditional platform -- a generous welfare society -- is increasingly under threat.

The government hopes to create at least 60,000 jobs to underpin its fiscal policy. But that pledge coincides with a cooling down in Finland's economy. Further headwinds loom as trade unions demand pay increases, which risks undermining the competitiveness of Finnish exports.