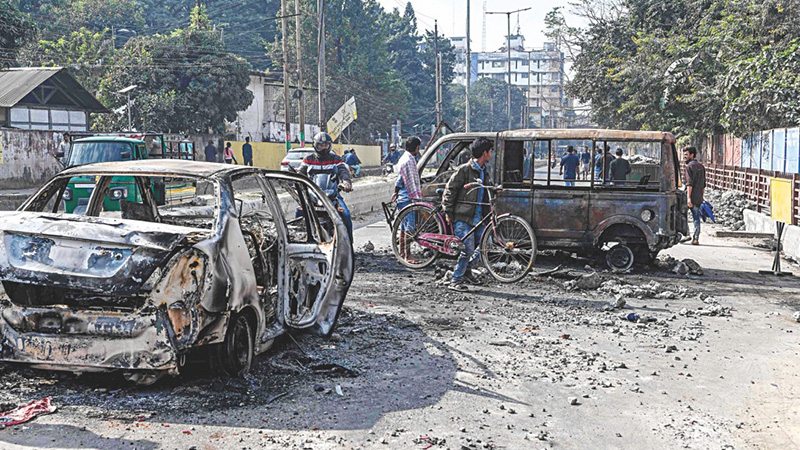 Says UN, calls on India to review it; Japan PM’s visit postponed as protests spread outside northeast; CMs of 5 states vow to prevent implementation of the act

The United Nations human rights office yesterday voiced concern that India’s new citizenship law is “fundamentally discriminatory in nature” and called for it to be reviewed.

The call came as violent protests, which paralysed India’s northeast states for days, spread outside the region, prompting Japanese Prime Minister Shinzo Abe to postpone a visit to India.

Thousands of protesters in northeast staged fresh demonstrations yesterday following several days of running battles with riot police that have left the streets of the region littered with burnt-out vehicles, rocks and other debris.

On Thursday two people were killed and around 20 were being treated in hospital after police fired live and blank rounds, medical staff said.

However protests there were more peaceful yesterday, reported our New Delhi correspondent. Curfew was relaxed in Assam’s Dibrugarh and Meghalaya capital Shillong. Despite the relative calm, more army and paramilitary forces were deployed yesterday in Assam to restore normalcy in the epicenter of protests.

But protests seemed to gain momentum across the country.

While police used batons and tear gas shells to quell an unruly mob at Shillong, protesters set fire to a railway station complex in West Bengal’s Murshidabad district. Even the national capital New Delhi witnessed violent protests, with students of the Jamia Millia Islamia University clashing with the police. At least fifty students were detained following the clashes.

Other smaller demonstrations took place elsewhere including in Prime Minister Narendra Modi’s home state of Gujarat, in Maharashtra in central India, in Kerala and Karnataka in the south and northern Punjab, reported AFP.

Modi and his Abe had reportedly been due to meet in Guwahati, the main city in the state of Assam and the epicentre of the protests, from tomorrow.

Without saying why, India said that both sides had “decided to defer the visit”, while Tokyo said the move followed “a report from the Indian side about the situation there.”

The postponement of Abe’s visit came a day after Bangladesh Foreign Minister A K Abdul Momen and Home Minister Asaduzzaman Khan called off their visits to India in the midst of the agitations in the northeast.

West Bengal Mamata Banerjee told reporters in Kolkata that the cancellation of visits by the Japanese PM and two Bangladesh ministers’ does not add to India’s image, reported our correspondent.

Many people in India’s far-flung northeast, long a seething melting pot of different ethnic groups and religions, fear that the new legislation will grant citizenship to large numbers of non-Muslim “immigrants” from neighboring nations.

The new law does not extend the same protection to Muslim migrants as to six other religious minorities fleeing persecution, thereby undermining India’s commitment to equality before the law, enshrined in its constitution, he said.

“We understand the new law will be reviewed by the Supreme Court of India and hope it will consider carefully the compatibility of the law with India’s international human rights obligations,” Laurence said.

He also called on India “to respect the right to peaceful assembly, and to abide by international norms and standards on the use of force when responding to protests.”

The passage of the law sparked angry scenes in both houses of parliament this week, with one lawmaker likening it to anti-Jewish legislation by the Nazis in 1930s Germany.

The chief ministers of at least five Indian states have said they will not implement the law, including Mamata who has called for major protests in Kolkata on Monday.

CMs of Kerala, Punjab, Madhya Pradesh and Chhattisgarh, terming the law as discriminatory and unconstitutional, declared that they would not implement the law in their respective states.

The internet has been cut in parts of Guwahati -- activists say India is already the world’s leading country when it comes to snapping online access -- and many areas have been put under curfew.

The Meghalaya state government has also cut off mobile internet, with parts of the capital Shillong under curfew since Thursday evening.

Security was increased at the Bangladeshi consulate in Guwahati after a vehicle in the consul’s convoy was attacked Wednesday by mobs, the foreign ministry in Dhaka said.

The Citizenship Amendment Bill (CAB) -- approved this week -- allows for the fast-tracking of applications from religious minorities from Pakistan, Afghanistan and Bangladesh, but not Muslims.

For Islamic groups, the opposition and rights organisations, it is part of Modi’s Hindu nationalist agenda to marginalise India’s 200 million Muslims. He denies this.

The US State Department on Thursday urged India to “protect the rights of its religious minorities”, according to Bloomberg.