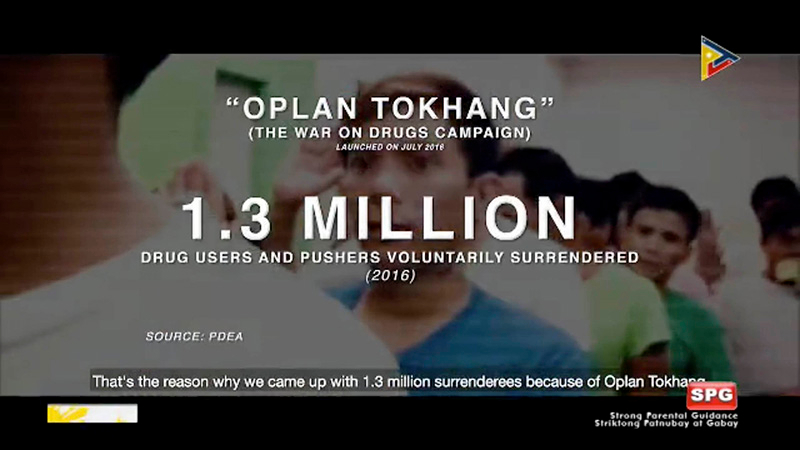 Barely two months after the movie “On the President’s Orders” made the rounds of European and US cinemas to present what its award-winning filmmakers described as a “cinematic investigation” of the country’s bloody war on drugs, the Philippine government is coming up with an onscreen rebuttal.

A documentary titled “Gramo” will show a “balanced picture” of President Duterte’s anti-narcotics campaign and inform the global community and the international media about his administration’s efforts to “save” the future of the nation, Communications Secretary Martin Andanar said on Thursday.

“By showing all the facts in this documentary, we are hoping for an appreciation of what is really happening on the ground,” Andanar said of the 50-minute film.

Gramo, which will have an English-dubbed version, “will be submitted to our Permanent Mission to the United Nations in Geneva and New York, and it’s up to them to give it to the UN,” Andanar said in an interview on state-run Radyo Pilipinas.

“We are hoping that we’d reach different sectors on the international stage,” he added.

There may also be a film screening for diplomats based in the Philippines, the Palace official said.

For PUV passengers, too

The Presidential Communications and Operations Office (PCOO) is also coordinating with the Department of Transportation to also allow the viewing of documentary on TV-equipped public utility vehicles.

On Wednesday, the PCOO announced the future screening of the documentary, along with the publication of a magazine, in a bid to present an “accurate narrative of the (drug) campaign involving those who pursue the operations.”

In a separate interview, Andanar maintained that the government was not condoning extrajudicial killings and that impressions to the contrary were just the result of “misinformation and fact-twisting by oppositionists and other interest groups.”

“[It’s] never been a policy of the national government,” he said.

Gramo, which premiered on government channel PTV 4 on Thursday, features the stories of persons who had killed family members while under the influence of drugs. It also showcases the story of a police officer killed in the line of duty, and that of a drug user undergoing rehabilitation.

Meanwhile, the newly released magazine titled “Saving the Future of the Nation; Countering Hard Drugs,” also chronicles the anti-narcotics campaign from the government’s point of view.

Gramo also highlights the number of drug dependents who had surrendered and had been admitted to rehabilitation programs, as well as that of children rescued from drug-related activities.

“On the President’s Orders,” on the other hand, grabbed headlines in October when it became the subject of a request from the International Criminal Court (ICC), which had been asked to conduct a preliminary examination into alleged extrajudicial killings in connection with Mr. Duterte’s war on drugs.

The ICC said it wanted to review footage from the documentary, which was shown in New York City on Oct. 4 and in Los Angeles on Oct. 18. Co-director James Jones confirmed that the ICC had requested a copy of the film.

On The President’s Orders was included in the official selections for the 2019 Sheffield DocFest in the United Kingdom; the 2019 HotDocs Film Festival in Toronto, Canada; the 2019 Human Rights Watch Film Festival in New York; and the 2019 CPH:DOX in Copenhagen, Denmark.

For the documentary, the Emmy-winning directors Jones and OIivier Sarbil spent time with a police chief and his officers in Caloocan City, as well as with the families who lost members to the drug war.

In the UNHRC session, Iceland formally introduced a resolution requesting, among other things, that the UN Office of the High Commissioner for Human Rights prepare a report on the human rights situation in the Philippines.

The resolution was later approved by the council amid strong objections and threats of retaliation from the Philippine government.

Prior to its recent screening in Metro Manila to a limited audience, the film was condemned as a piece of “black propaganda” by Palace officials, who said that it “reeks of malice”.

Its filmmakers, however, received letters applauding for the project and thanking them for presenting the realities on the ground.