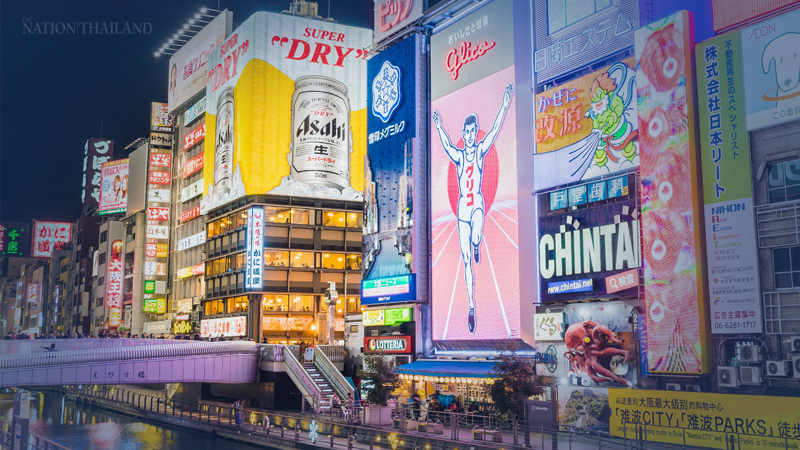 OSAKA, Japan - The area in and around the Airin area of Nishinari Ward, Osaka is being transformed by a wave of internationalisation.

The area in and around the Airin area of Nishinari Ward, Osaka, long known as a day laborer’s neighborhood, is being transformed by a wave of internationalization.

Numerous businesses aimed at foreign customers have opened, and a “Chinatown concept” has been floated by Chinese business owners.

The district’s residents and others have expressed a mix of hope and bewilderment over the changes.

At the end of September, a job training facility for foreigners called YOLO BASE opened on the north side of Shin-Imamiya Station, operated by West Japan Railway Co. (JR West) and Nankai Electric Railway Co.

At the opening ceremony, Taisuke Kaji, 43, president of the firm that manages the facility, said, “We want to present a new kind of culture as a neighborhood for foreign workers.”

The facility provides Japanese-language courses and internet training needed to obtain the “special skills” visa status that was created in April. Foreign workers are employed in the facility’s hotel and restaurant.

Nankai Electric Railway purchased what had been unused land from the city to create the facility.

In anticipation of the opening of the Naniwasuji Line, which is scheduled for 2031 and would allow direct travel between Osaka and Kansai Airport, the city is looking to engage in community-building in a way that encourages foreigners to settle down.

Shin-Imamiya Station, being a transfer station and close to the Tsutenkaku tower, has become a base for foreign tourists.

In June, Hoshino Resorts Inc. began building the OMO7 hotel north of the station. The hotel is scheduled to open in 2022.

“There are potential business opportunities in this neighborhood. We want to make it more lively,” said a representative of a council that includes Nankai and Hoshino Resorts.

It is now not uncommon to see foreign tourists pulling suitcases in the Airin area on the south side of the station.

The area, where about 2 million day labor contracts were made each year after the Great Hanshin Earthquake in fiscal 1995, has changed with the times.

After the economic bubble burst, the area saw an increase in homeless people, and since the 2000s, it has been home to many people living on welfare.

Some of the simple lodging houses for laborers transformed themselves into apartments for welfare recipients. Among Osaka’s 24 wards, Nishinari Ward had the highest proportion of welfare recipients at 23% as of July this year.

The neighborhood also has an aging and declining population.

It has been the foreign tourists who have made the place more lively. Simple lodging houses renovated to serve foreigners have been popular due to their low prices and easy access.

“We have to keep attracting people to make sure we don’t lose our vitality,” said Masahiko Sugiura, 49, secretary general of a trade association for simple lodging houses in Osaka Prefecture.

Real estate prices have also risen along with the changes. In valuations of land prices along major roads released by the National Tax Agency in July, the highest price in Nishinari Ward had increased by 15.8% over the previous year.

Chinese-owned businesses have flowed into the hollowed-out neighborhood.

Starting about 10 years ago, Chinese enterprises started moving into shops in a shopping district in the eastern part of the Airin area that had been left vacant due to aging proprietors or the decline in the number of laborers who had been the customers.

There are now about 100 karaoke pubs staffed by Chinese women and others. There are also reportedly more than 40 guest houses for Chinese tourists in the area.

About 40 Chinese business owners and others formed the Osaka Ka Shokai business association in December 2017. They announced the Osaka Chinatown concept in February this year.

The plan is to build a Chinese gate like the ones in Yokohama and Kobe, and to open about 100 stores including Chinese restaurants and general stores. Local shop owners, however, are dead set against the scheme and it remains to be seen whether it will go smoothly.

How are people involved in community-building in Nishinari responding to the changes brought by increased outside investment?

The Osaka city government proposed the “Nishinari special zone concept” in fiscal 2013 and through this has pursued vitalization policies focused on Nishinari.

Collection of illegally dumped garbage and crackdowns on drug deals have greatly improved security and the environment. Discussions about how the future should look are continuing among residents, the administration, aid organizations, experts and others.

In these debates, while some believe the outside investment will create jobs in the area, there are concerns this will increase land prices, making it difficult for the area’s original residents to continue living there.

One of the experts on the panel, Tatsuya Shirahase, an associate professor of sociology at St. Andrew’s University, said: “Nishinari has historically received robust support from the administration and private organizations in areas such as jobs, welfare and housing. This strength should be valued.”

Starting this fiscal year, the city government increased its employment support for young people who receive welfare in the Airin area.

“We should aim to create a neighborhood that welcomes a diverse population, including foreigners, while accepting changes to the neighborhood,” Shirahase said.

Gentrification is a pattern in which areas where poor and marginalized groups live undergo redevelopment and other changes, which causes land prices to rise and population to become relatively wealthy. This term often has a negative context because it tends to force out the poor.

According to Yoshihiro Fujitsuka, a professor of urban geography at Osaka City University, the term was first used in 1964.

An influx of the middle class into a working-class district of London caused housing prices to rise, which drove out the working class.

In 1970s New York, artists started moving into the Soho district, where sewing factories were concentrated, creating studios out of old garment factories. Cafes, bars and other businesses moved in, driving up real estate prices. In the 2000s, the same thing started happening in Brooklyn.

It has also occurred in Eastern Europe after the collapse of socialism. In eastern Berlin, the government has subsidized the renovation of old buildings.

In Japan, gentrification has occurred in places such as Chuo Ward, Tokyo, where small factories that moved out due to rising land prices were replaced by high-rise condominiums. Experts are divided as to whether gentrification will occur in Nishinari Ward.