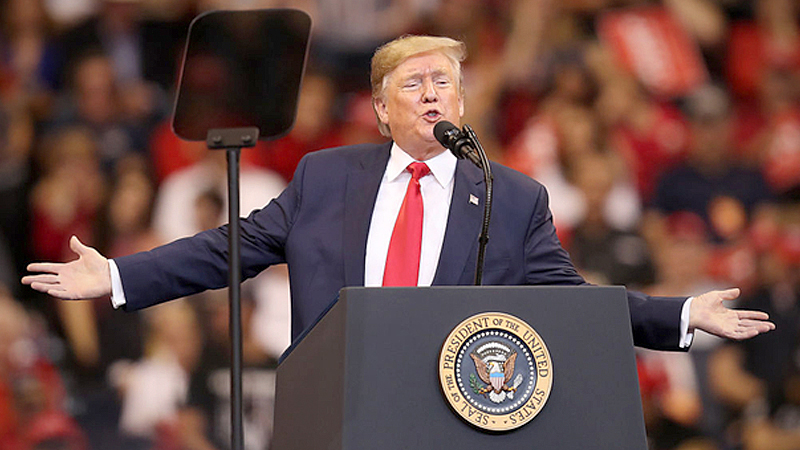 Now, with a few weeks still left in 2019, the president already has more than doubled the total number of false or misleading claims in just a single year.

As of Dec. 10, his 1,055th day in office, Trump had made 15,413 false or misleading claims, according to the Fact Checker's database that analyzes, categorizes and tracks every suspect statement he has uttered. That's an average of more than 32 claims a day since our last update 62 days ago.

In fact, October and November of this year rank as the second- and third-biggest months for Trumpian claims. They are exceeded only by October 2018, when Trump barnstormed the country in a desperate - and unsuccessful - effort to thwart a Democratic takeover of the House of Representatives. Both Octobers had more than 1,100 claims, with an average of nearly 40 claims a day.

A key reason for this year's jump: the uproar over Trump's phone call with Ukraine's president on July 25 - in which he urged an investigation of former Vice President Joe Biden, a potential 2020 election rival - and the ensuing House impeachment inquiry. Nearly 600 of the false or misleading claims made by the president in the past two months relate just to the Ukraine investigation.

The president apparently believes he can weather an impeachment trial through sheer repetition of easily disproven falsehoods.

For instance, more than 60 times he has claimed that the whistleblower complaint about the call was inaccurate. The report accurately captured the content of Trump's call and many other details have been confirmed. Eighty times, Trump has claimed his phone call with the Ukrainian president was "perfect," even though it so alarmed other White House officials that several immediately raised private objections. This is a talking point that even Trump's Republican defenders have trouble repeating.

Three claims about the Ukraine investigation have now made it on our list of Bottomless Pinocchios. (It takes 20 repeats of a Three or Four Pinocchio claim to merit a Bottomless Pinocchio, and there are now 30 entries.) Besides the claim about the whistleblower, the two other claims on the Bottomless Pinocchio list are that Biden forced the resignation of a Ukrainian prosecutor because he was investigating his son Hunter and that Hunter Biden scored $1.5 billion in China after hitching a ride on Air Force Two with his father.

Trump crossed the 10,000 mark on April 26. From the start of his presidency, he has averaged nearly 15 such claims a day.

About one in five of these claims are about the economy or jobs.

As he approaches a tough reelection campaign, Trump's most repeated claim - 242 times - is that the U.S. economy today is the best in history. He began making this claim in June 2018, and it quickly became one of his favorites. The president can certainly brag about the state of the economy, but he runs into trouble when he repeatedly makes a play for the history books. By just about any important measure, the economy today is not doing as well as it did under Presidents Dwight D. Eisenhower, Lyndon B. Johnson or Bill Clinton - or Ulysses S. Grant. Moreover, the economy is beginning to hit the head winds caused by Trump's trade wars, with the manufacturing sector in an apparent recession.

About one in six of Trump's claims are about immigration, his signature issue - a percentage that increased earlier in the year when the government was partially shut down over funding for his promised wall along the U.S.-Mexico border. In fact, his second-most repeated claim - 235 times - is that his border wall is being built. Congress balked at funding the concrete barrier he envisioned, so he has tried to pitch bollard fencing and mostly repairs of existing barriers as "a wall." He tried to redirect funds from other projects but run into trouble with the courts. The Washington Post has reported that the bollard fencing is easily breached, with smugglers sawing through it, despite Trump's claims that it is impossible to get past. As of October, the Trump administration had acquired just 16 percent of the private land in Texas it needs to build the president's border barrier, with less than four miles completed.

Trump has falsely said 181 times that he passed the biggest tax cut in history. Even before his tax cut was crafted, he promised it would be the biggest in U.S. history - bigger than Ronald Reagan's in 1981. Reagan's tax cut amounted to 2.9 percent of the gross domestic product, and none of the proposals under consideration came close to that level. Yet Trump persisted in this fiction even when the tax cut was eventually crafted to be the equivalent of 0.9 percent of GDP, making it the eighth-largest tax cut in 100 years. This continues to be an all-purpose applause line at the president's rallies.

The president frequently offers inflated estimates for trade deficits with various countries and insists they are being reduced on his watch, even though they are climbing.

The president's constant Twitter barrage also adds to his totals. Nearly 20 percent of the false and misleading statements stemmed from his itchy Twitter finger.

Trump's penchant for repeating false claims is demonstrated by the fact that the Fact Checker database has recorded nearly 400 instances in which he has repeated a variation of the same claim at least three times.

Even as Trump's fact-free statements proliferate, there is evidence that his approach is failing.

Fewer than 3 in 10 Americans believe many of his most-common false statements, according to a Washington Post Fact Checker poll published in 2018. Only among a pool of strong Trump approvers - about 1 in 6 adults in the survey - did large majorities accept several, although not all, of his falsehoods as true.

The award-winning database website, created by graphics reporter Leslie Shapiro, has an extremely fast search engine that will quickly locate suspect statements the president has made. We encourage readers to explore it in detail. We recently added a new feature that provides a URL for every claim that is fact-checked, allowing readers to post the link on social media.

Note: The Fact Checker welcomes academic research of the Trump claims database. Recent examples include work done by Erasmus University , University College London and the University of California at Santa Barbara . You can request our data files with an explanation of your research plans by contacting us at [email protected] .