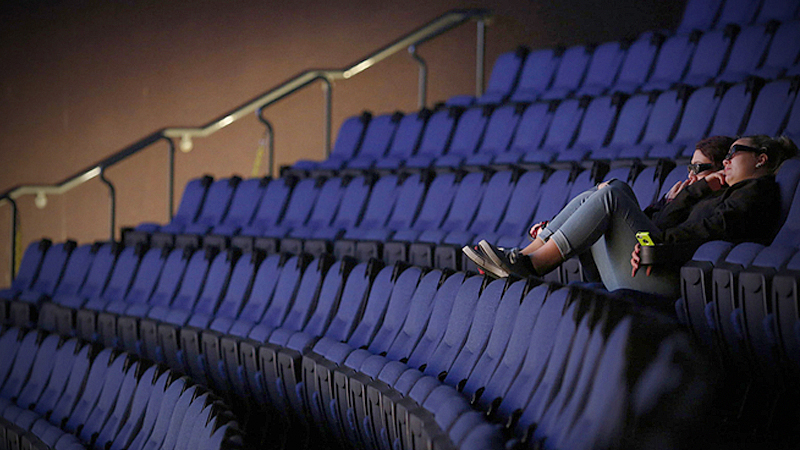 Audiencegoers watch a 3D movie at the Tennessee Aquarium IMAX theater in Chattanooga, Tenn., in 2017. MUST CREDIT: Bloomberg photo by Luke Sharrett

After stumbling at the box office and irking many fans, Walt Disney Co. is betting that it can win them back with the latest chapter of the "Star Wars" series.

Like an aging rock band promoting its last tour, marketing for "Star Wars: The Rise of Skywalker" plucks the nostalgia strings and plays up the fact that there won't be another film for years.

"The story of a generation comes to an end," reads the scroll across one TV commercial for "Star Wars: The Rise of Skywalker," which opens in theaters Friday. Disney press releases pitch the film as the "riveting conclusion of the seminal Skywalker saga." And in a scene that's set the internet aflutter with predictions of his demise, the beloved protocol droid C-3PO says ominously, "Taking one last look, sir, at my friends."

While any Hollywood executive would gladly crawl across the frozen tundra of Hoth to snag a property like "Star Wars," Disney has faced challenges since buying the franchise from creator George Lucas for $4 billion in 2012. After rebooting the series with the smash hit "The Force Awakens" in 2015, the studio has struggled to match that success and please die-hard fans who have been unhappy with the storylines.

No one is predicting the new movie will disappoint financially. The research site Box Office Pro estimates the film will take in $185 million to $225 million in its opening weekend in North America. The Hollywood Stock Exchange puts that number at $230 million, enough to rank among the top five debuts of all time.

Disney, privately, said it will be happy with anything approaching sales of the previous film in the current trilogy. "The Last Jedi" took in $220 million in its opening weekend two years ago and went on to gross $1.33 billion worldwide.

One, it just hasn't won over younger fans like the original 1977 film did. Dan Zehr, a high school literature teacher in Washington, Illinois, who hosts the podcast "Coffee with Kenobi," said only about half of his seniors have seen a "Star Wars" film. Some are intimidated by the number of movies in the series and its complex mythology. Many just grew up watching Disney superheroes in theaters.

In the first week "The Force Awakens" was in the theaters, about 31% of ticket buyers were between ages 18 and 24, according data collected by Comscore Inc. When "The Last Jedi" came out two years later, that share had fallen to 26%, suggesting the series is losing a key demographic.

The other problem is that some older fans were turned off by the one-per-year schedule of "Star Wars" films under Disney and by the plots of some recent films, including "The Last Jedi," which saw Luke Skywalker renounce his own legacy, among other twists.

Under Lucasfilm President Kathleen Kennedy, Disney has shuffled "Star Wars" writers and directors. "Jurassic World" director Colin Trevorrow was originally scheduled to make the new film but was replaced two years ago by J.J. Abrams, who directed "The Force Awakens." His job was to advance the story that director Rian Johnson told in "The Last Jedi" and bring the Skywalker tale to a satisfactory close.

"I just think we had a great working relationship with J.J. on this to really arrive at something that we all felt was emotionally meaningful and satisfying," Kennedy told the science-fiction blog io9 earlier this month.

Some of the nostalgia for "The Rise of Skywalker" is inevitable. It is the last film in a trilogy that began with "The Force Awakens." Carrie Fisher, who has played Princess Leia since the first movie in 1977, died after filming "The Last Jedi." Abrams used scenes cut from his earlier film to produce a fresh and presumably final performance by her in the new one.

While positioning "The Rise of Skywalker" as the last hurrah for the Skywalker clan isn't likely to win over new fans, it will appeal to older ones, according to Robert Marich, author of "Marketing to Moviegoers."

Some see a model for the future of the franchise in "The Mandalorian," a spinoff TV series on Disney's new streaming service that's generating social-media buzz and viewers with an entirely new cast. The company is promoting the movie to fans of that series, offering the latest episode two days early with an exclusive peek into the film.

"My kids watch it every Friday," said Matt Endres, a 41-year-old banker from Belleville, Illinois.

In the meantime, Disney can count on "Star Wars" diehards like Nathan Cuthbertson to still come out to see "The Rise of Skywalker."

The 53-year-old corrections officer from Burgaw, North Carolina, remembers riding home from the first movie, acting out fight scenes in the back seat of the family sedan. Cuthbertson wants some major questions answered in the new film, such as what happens to Leia and who exactly are the parents of Rey, the heroine of the current trilogy.

He plans on seeing the film in a preview Thursday night and is taking Friday off work so he can meet with fans and pose for photos in his hand-built Stormtrooper outfit.

"This is a chance for them to put a nice ribbon on the Skywalker saga," he said.