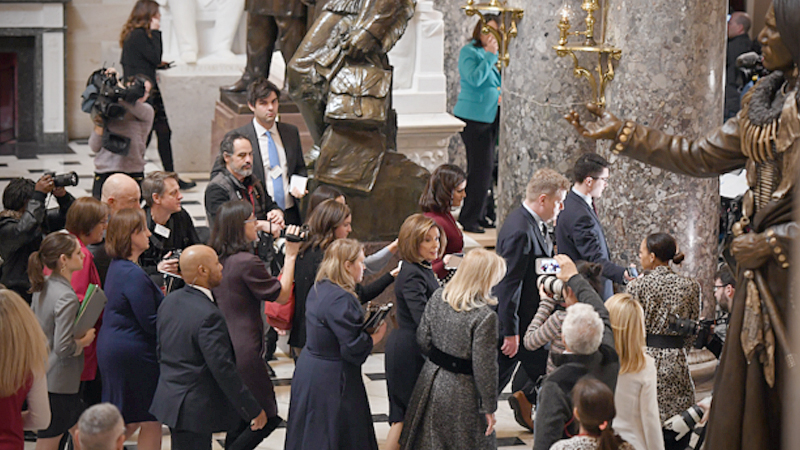 BATTLE CREEK, Mich. - Just minutes before becoming the third president ever to be impeached, President Donald Trump took the stage here Wednesday evening as House Intelligence Committee Chairman Adam Schiff - one his Democratic tormentors and targets throughout process - was finishing up his own speech criticizing the president's conduct that led the nation to this historic brink.

As Trump began speaking, the House began voting - a striking and surreal split screen for a president who had journeyed 600 miles from the Capitol but was unable to escape impeachment and the imprint it will leave on his legacy.

"By the way, it doesn't really feel like we're being impeached," Trump said mere moments into his speech, claiming that he did "nothing wrong" and touting the support he has in the Republican Party.

The tableau came after a full day of House debate in Washington over the evening vote to impeach the president, who hunkered down in the White House residence Wednesday with no public events on his schedule, save the rally - but who weighed in on Twitter no fewer than 49 times.

A rage-filled letter laced with falsehoods that Trump sent House Speaker Nancy Pelosi, D-Calif., on Tuesday, however, offered an epistolary preview of what Trump began delivering in performative fashion onstage in Michigan on Wednesday night.

The outcome of the political struggle is largely preordained: House Democrats voted to impeach Trump on Wednesday night, but the Republican-controlled Senate probably will vote to acquit him early next year. Those in Trump's orbit said the president took solace in the display of Republican unity and in regular briefings from his campaign team, who counseled optimism.

The campaign repeatedly showed Trump their impeachment polling and reassured him that, at least in the short term, the process has ignited fundraising, further solidified his core supporters and even helped boost him slightly in some key battleground states, a senior campaign official said.

Perhaps it was not surprising that the impeachment of Trump - who said Tuesday that he bore "zero" responsibility for his predicament - would ultimately play out not just on separate screens, but across almost entirely separate realities.

By midafternoon, as the debate on the House floor raged on, counselor to the president Kellyanne Conway appeared in the White House briefing room, where she did not officially brief the press but stood just to the side of the podium and denounced the impeachment inquiry.

The statements on the House floor, too, took on a tale-of-two-impeachments tone. Rep. Mike Kelly, R-Pa.- who in 2012 generated considerable criticism after comparing the Affordable Care Act's birth control mandate to the bombing of Pearl Harbor - wielded the historical allusion again, saying that Trump's impeachment and Pearl Harbor were both December days "that will live in infamy."

Rep. Barry Loudermilk, R-Ga., seemed to compare Trump to Jesus, who he claimed received a fairer trial than the president before his crucifixion.

"When Jesus was falsely accused of Treason, Pontius Pilate gave Jesus the opportunity to face his accusers," Loudermilk said. "During that sham trial, Pontius Pilate afforded more rights to Jesus than the Democrats have afforded this president in this process."

House Majority Leader Steny Hoyer, D-Md., meanwhile, urged House Republicans to look past partisan politics and instead be "profiles in courage" voting to impeach the president.

Competing realities emerged even from within Trump's own White House. Press secretary Stephanie Grisham claimed the president was "working all day," though a cursory read of Trump's twitter feed cast doubt on that notion. His first tweet, as he watched "Fox & Friends," came just after 7 a.m., and by midafternoon he had tweeted nearly four dozen times.

He had no publicly scheduled events beyond his rally, though White House officials said he participated in several private meetings, including on the spending package and prescription drug pricing.

Even his fiery Tuesday letter to Pelosi proved something of a Rorschach test, depending on the audience.

The six-page missive contained more than a dozen false and misleading claims, decrying impeachment as "egregious," "terrible" and "illegal," and underscored the starkly personal lens through which Trump views the inquiry.

"You do not know, nor do you care, the great damage and hurt you have inflicted upon wonderful and loving members of my family," he wrote at one point.

At another, he accused Pelosi of offending not just the nation's founders by also Americans of faith "by continually saying 'I pray for the President,' when you know this statement is not true, unless it is meant in a negative sense."

Pelosi, its intended recipient, described it as "sick." A White House official happily noted that Trump had managed to dominate news coverage with his letter, amplifying the defiant posture he's maintained throughout the process.

"I don't think the tone was new," said the official, who spoke on the condition of anonymity because the official was not authorized to discuss the matter publicly. "The letterhead was new but the tone was not."

Other Republicans viewed the letter as not especially productive, but as part of the "normalized crazy" even allies have now come to expect from Trump, said one Republican Senate aide.

Brendan Buck, a longtime former Hill aide who is now a Republican operative, said the historic import of the moment was undermined by the drastically different political perspectives that dominated the proceedings from the outset.

"This debate never felt as weighty as it should because the issues were just no match for the tribalism," Buck said. "From the very start, the process was predictable and the outcome obvious. And at the end of it all, we're basically right back where we started. There's a stain on his legacy but no appreciable change in the political dynamics."

The most recent previous impeachment, of President Bill Clinton in 1998, played out somewhat differently. Similar to Trump, Clinton decried the "excessive partisanship" and "obsessive animosity" that led to the vote, but he also seemed to acknowledge and accept his reality.

After the House vote was official, he donned a coat and walked to the Rose Garden where, alongside first lady Hillary Clinton and Vice President Al Gore, he offered his remarks.

"I hope there will be a constitutional and fair means of resolving this matter in a prompt manner," Clinton said, shortly before heading back into the White House to throw a Christmas party. "Meanwhile, I will continue to do the work of the American people."

This time around, almost exactly 21 years to the day of Clinton's impeachment, the split screen dichotomy was on display in ways big and small.

Sen. Chris Murphy, D-Ct., shared on Twitter what he called a "true story" of a White House staffer making the round among Senate offices to deliver, as a single holiday package, a copy of Trump's scathing letter to Pelosi alongside two White House Christmas cards - one large white one and one smaller red one with Trump's signature Sharpie scrawl in gold.

"What a day," Murphy concluded.